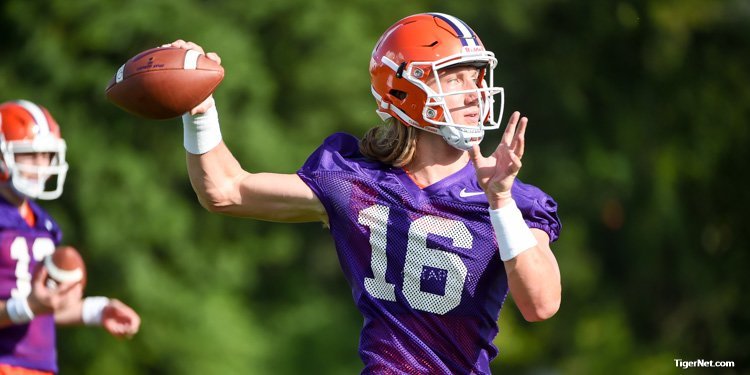 Trevor Lawrence throws during the early portion of practice

CLEMSON – The media walked out onto the practice fields behind the Reeves building late Friday afternoon, and what they saw was the beginning of what could be a special season.

We will start with Kelly Bryant. The incumbent looked like he was having fun again – something we haven’t seen since the ACC Championship – and he looked like the Bryant we saw at the beginning of last season. Of course, this is all with the caveat that it was the first day of practice, no one was in pads and there was no defense. It was simply ironing out the kinks.

A lot was made of Bryant’s body language both during the Sugar Bowl and during Clemson’s spring game in April, but he looked like the Kelly Bryant we saw much of last year as practice began. He was bouncing around, dancing, and exuding the confidence we were all used to seeing in 2017.

During the tempo session of the practice, Bryant looked like he was in charge and his throws were crisp in the beginning (the part I saw).

Trevor Lawrence looked like, well, Trevor Lawrence. There is just a difference between his throws and the throws of everybody else. He had some wow moments, and he had some moments where he looked like a freshman, but there is no denying the arm talent.

Danny Pearman and the tight ends spent part of the first four periods working with the quarterbacks and he had two great quotes. The first one was after Lawrence threw a pass at the feet of one of the tight ends, and Pearman said, “That is ok. Just get it in the same zip code. He will catch it.”

A little later, Lawrence threw a laser over the middle and hit Braden Galloway in stride (a beautiful throw), and Pearman, “Wow, that was so easy to catch I could have caught it.”

Chase Brice also looked good during the session. He has the arm strength to compete for a spot, and he isn’t backing down from the challenge.

*Wide receiver Will Swinney has changed numbers. Swinney wore No. 16 last season, but that now belongs to Trevor Lawrence. Because they might be on the field at the same time, Swinney has switched to No. 22.

*As expected, running back Tavien Feaster and linebacker Jamie Skalski were in yellow jerseys. Feaster recently had surgery to repair his meniscus. Skalski underwent foot surgery during the summer. Head coach Dabo Swinney said both should be full-go next week.

*It’s only the first day of practice, but there were already NFL scouts out to see the talent at Clemson. The Atlanta Falcons, Houston Texans and Tampa Bay Buccaneers all had personnel on hand for day one of camp.

*While most of the media watched the offense, I wandered over to watch the new kids on defense, specifically Mario Goodrich and Kyler McMichael. There isn’t a lot you can tell from the first day, but both look the part and appear to have great instincts. Most freshmen look lost on the first day but neither one seemed to be intimidated.

*Running back Lyn-J Dixon took a little extra coaching from running backs coach Tony Elliott. He is another that looks the part, and during the drills I watched he showed an impressive burst. He also has good hands.

*While watching the defense, I wasn’t shocked to see the defensive line going about their business in a professional manner. They had fun, to be sure, and there was the usual amount of kidding around. But they were also there to work and the older players don’t mind keeping the younger players in line.

It helps to have Christian Wilkins and Austin Bryant watching over Darnell Jefferies, Xavier Thomas, and KJ Henry.

*The team went through punting and punt return drills during the first part of practice. Hunter Renfrow, Amari Rodgers, Derion Kendrick and Will Swinney all worked at punt return. Rodgers and Kendrick both looked extremely comfortable and explosive during the drill.

The punts were a mixed bag throughout the period. Some were 40-plus yards and then there were some that were short and out of bounds. It will be interesting to follow the battle between Will Spiers and Carson King.

*When it comes to the wide receivers, all I can say is wow. Justyn Ross already looks the part, and he didn’t look lost in drills (even though he had one pass catch him by surprise). You can tell he has room to grow and to improve, but he’s already impressive. Same goes for Amari Rodgers and Diondre Overton and even TJ Chase. They all look like game-breakers.

Tee Higgins LOOKS like he is on another level. He’s added some size but still runs smooth routes. He is another one that looked to be all business out there.

*The first team during the ‘Tempo’ period was everyone listed first on the depth chart.

*If you walked out on the practice field and saw tight end Braden Galloway, you would swear you were looking at the junior year version of Jordan Leggett. They are both have similar builds, but athletically, Galloway is already ahead of Leggett.

*Offensive lineman Jackson Carman looked much better than he did in the spring. He is listed at 338 pounds and he was moving extremely well. He worked with the third team at left tackle.

*Nikki Hood contributed to this report.