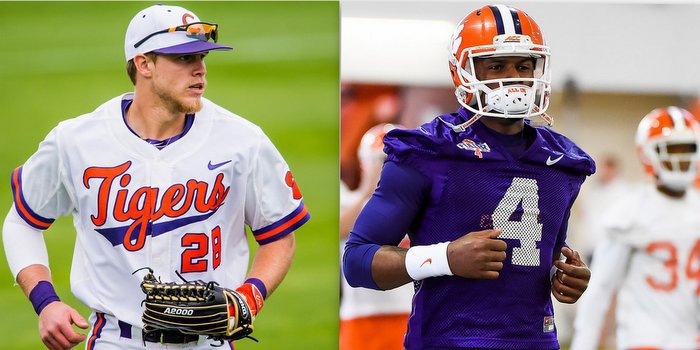 CLEMSON – It’s not often that one GOAT is at a school at the same time as another GOAT, but that’s what’s happening at Clemson.

Rising junior quarterback Deshaun Watson was a third-place finisher for the Heisman Trophy last season and led the Tigers to a runner-up finish in the College Football Playoff National Championship. Along the way, Watson either won or was a finalist for many of college football’s major awards and is primed to make a run at all of the above next season.

So when Watson calls another player the GOAT, you take notice.

In today’s social media lexicon, GOAT is an acronym for “Greatest of All Time” and it’s thrown around with frequent regularity on Twitter. However, Watson tweeted out last Sunday that he was big fan of freshman outfield sensation Seth Beer. Beer hit a walk-off home run in the 10th inning to lead Clemson to a 3-2 victory and series sweep over Boston College, adding to his growing lore.

Watson quickly tweeted out his thoughts on Beer:

Watson told TigerNet this week that can appreciate what Beer has accomplished as a freshman, bringing to mind another precocious freshman from the 2014 football season named….Deshaun Watson.

“He's been doing great and he's been there for his team. I would tell him to continue to do what he's doing and continue to be the player that he is,” Watson said. “Don't change, and he has a bright future in whatever he wants to do. I've met him once, but other than that I haven't really had a chance to talk to him. He's been busy and I've been busy, but whenever I have a chance to meet him and talk to him I will of course.”

Beer said Wednesday that he appreciates Watson reaching out.

“Obviously, he's a tremendous athlete and a great person. To get recognition from a guy like that is pretty special,” Beer said. “To get a tweet from a guy that played in the national championship and was a runner-up for the Heisman Trophy is pretty special. But also it's the link we have because we are both Georgia boys and kind of grew up playing the same kind of stuff. It's just a cool feeling for him to pass that one to tell me I am doing a great job as a freshman.”

Watson said he thinks Beer will continue to handle the pressure of being a GOAT and a Tiger.

“I know it's fun and he's enjoying it. It's happening fast. But you know he will handle it well,” Watson said. “He's a great guy and a great person. This is what he came to Clemson to do is to perform and make an impact on his team.”

Are the two Clemson players the greatest of all time? Nope, not yet. But it’s fun to see that they recognize something special in each other, and it sure is fun to watch both of them on campus at the same time.