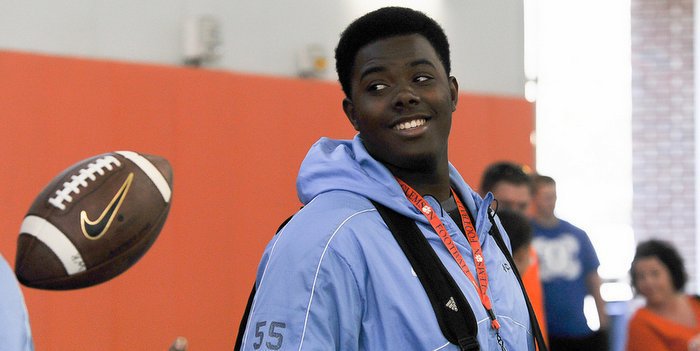 Thomas smiles during one of Clemson's spring practices

One of the nation’s top prospects will announce his school of choice at Nike’s The Opening next month, and Clemson is firmly in the mix.

Offensive tackle Andrew Thomas of Atlanta (GA) Pace Academy is the nation's No. 11 offensive tackle and No. 67 overall prospect according to Rivals, and he confirmed to TigerNet Wednesday that he will make his announcement at The Opening in early July.

Thomas, a 6-5, 317-pounder, owns offers from Alabama, Auburn, Florida, Georgia, Miami, Michigan, Notre Dame and South Carolina among others. Clemson offered last spring and has stayed in the mix throughout the process, and Thomas visited campus for Elite Junior Day on Jan. 30th and came back for spring practice.

The Tigers are one of three finalists for Thomas’ services – along with Notre Dame and Georgia – and Thomas said he thinks he knows which school he will choose.

“I've just been talking with my family, and I decided to go ahead and get it over with and make a decision. I think I already know where I'm going to go,” Thomas told TigerNet. “I guess it's just my relationship with the coaching staff and the feel of going up there. It's just everything about the school.”

Thomas then detailed the reasons he likes each of the three finalists.

“Notre Dame, they have a great business program. It's one of the top institutions in the nation. Their football is great. They put a lot of guys in the league,” he said. “Clemson, my relationship with the coaching staff, stands out. It's something different when you go up to Clemson. It's just a different feel. They competed for a national championship last year.

“At Georgia, they have a great business program. I have a good relationship with the coaches, and it seems like they're bringing something to Georgia with the new staff coming in.”

Thomas said his relationship with main recruiter and co-offensive coordinator Tony Elliott has been a big reason the Tigers have stayed at or near the top.

Thomas said he isn’t sure how he will make the announcement but hopes to do a live broadcast on ESPN.