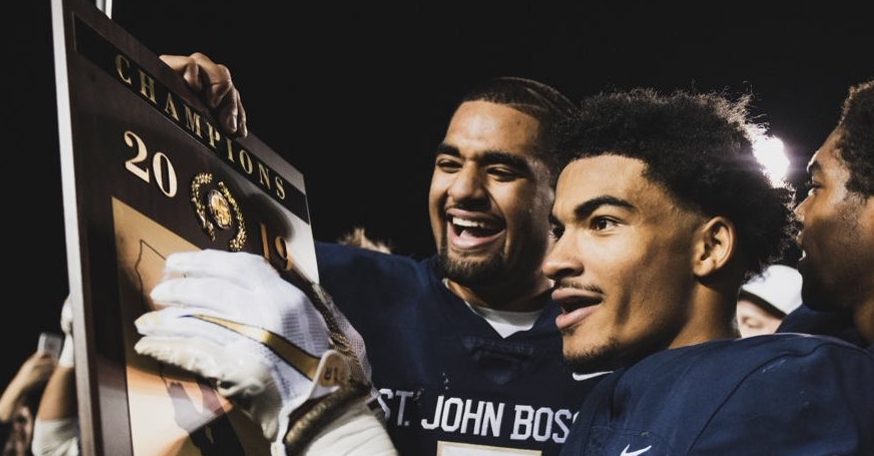 Uiagalelei (left) celebrates with his teammates

Clemson quarterback commit D.J. Uiagalelei can claim what might be the best finish to a high school career in prep history.

The 5-star quarterback closed out his St. John Bosco (Bellflower, California) career with a 49-28 win over No. 7 De La Salle (Concord, California) Saturday night to win the California state championship and the high school national championship (due to finishing the season as the No.1 team). Two weeks earlier, Uiagalelei led Bosco to a win over California powerhouse Mater Dei, which won the same championships last season.

Uiagalelei completed 23 of 28 passes for 398 yards and four touchdowns and scored a fifth on the ground while rushing for total 64 yards.

De La Salle had won six Open Division championships from 2009 to 2015 and been the runner-up in the last four.

After the game, Uiagalelei was approached by legendary De La Salle coach Bob Ladouceur, who coached the Spartans from 1979-2012 and amassed a 399–25–3 record. Ladouceur told Uiagalelei he was a heck of a player.

“That's a legend right there,” Uiagalelei said. “That's probably one of the greatest high school football coaches ever. Being able to talk to him and him saying those words, it was pretty cool. I'll take that any day.”

Uiagalelei and his team saved the best for last.

While Uiagalelei couldn’t have scripted a better end to his high school career, he said this was the plan all along.

While his future team is preparing for a College Football Playoff, Uiagalelei is able to go out on top at the prep level.

“It was kind of like the College Football Playoff,” he said. “To be able to beat those two teams my last two high school football games, it was incredible. Especially for our senior class to go out on top like that. We've been working for this not just for 11 months but for four years. To be able to win a championship ourselves, we can say 'We won that championship. That was us.'”

Now, he will turn his attention to finishing his high school academic career before enrolling at Clemson in January.

“I've got three more days of school. Wednesday is my last day of finals and I'm signing my Letter of Intent on Wednesday,” he said. “I'll probably just keep training and working out. I'll start my offseason workouts tomorrow.”