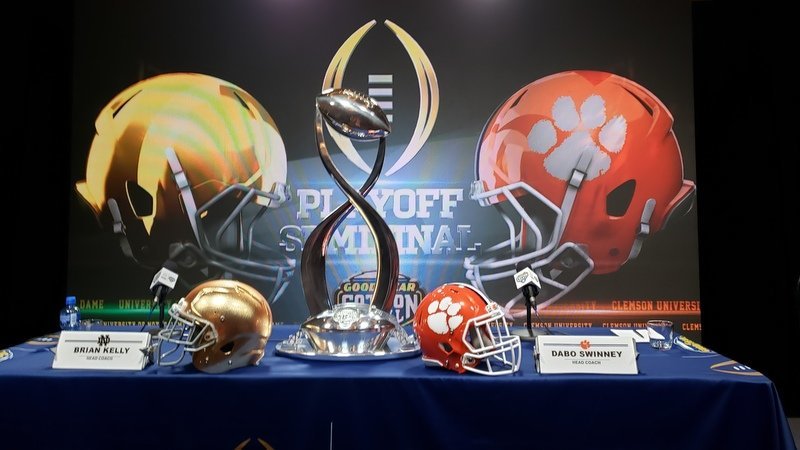 No Dexter? No problem.

No. 2 Clemson will take the field for Saturday’s Cotton Bowl College Football Playoff Semifinal against Notre Dame without talented defensive tackle Dexter Lawrence, and while Lawrence’s absence will be felt, it won’t affect the outcome.

*This will be the fourth game all-time between Clemson and Notre Dame. The visiting team won the first two games by six points or less, with Notre Dame winning at Clemson by a 21-17 score in 1977, and Clemson earning the victory at Notre Dame by a 16-10 score in 1979.

*Clemson has been ranked in the top 15 in the nation heading into the Notre Dame game in all four meetings, including a No. 2 ranking this year. The Tigers were ranked 15th entering the 1977 contest, 14th in 1979 and 12th in 2015. It will be the third time Notre Dame has been ranked in the top six entering the game with Clemson. The Irish were fifth in 1977, unranked in 1979, sixth in 2015 and third this year.

Notre Dame ranks 31st nationally in passing offense, averaging 265.6 yards a game, and it starts with quarterback Ian Book. Book enters the game completing over 70-percent of his passes for 2,468 yards with 19 touchdowns to just six interceptions. He's also rushed for 250 yards (3.2 AVG) and four scores. The Irish had to watch the tape of Clemson’s win over South Carolina and figure they have a shot at moving the ball through the air. The Irish have seven players with double-digit reception totals, led by Miles Boykin with 54 catches for 803 yards and eight touchdowns. Tight end Alize Mack is fourth on the team with 34 receptions for 349 yards and three scores, and Book is more than capable of escaping pressure and either making plays with his feet or throwing the ball down the field.

Simply put, Clemson’s secondary has to be much better against Notre Dame than they were against Texas A&M earlier this season and South Carolina in the regular season finale.

However…the Irish want to run the football with running back Dexter Williams. The Irish average 190.5 rushing yards a contest, good for 48th nationally. Williams has rushed for 941 yards (6.6 AVG) and 12 touchdowns. With Lawrence out, the Irish will try to run in between the tackles and test Albert Huggins and Christian Wilkins. Can Clemson stop them?

I asked quarterbacks coach Brandon Streeter Thursday about the decision to make Trevor Lawrence the starting quarterback, wondering if the decision was an easy one. He said there really wasn’t much of a discussion – the offense scores points in bunches with Lawrence at the helm.

Lawrence has thrown for 2,606 yards with a 24-4 touchdown-to-interception ratio, completing 65-percent of his passes. He has a plethora a weapons in what is arguably the nation’s most talented receiving group – if you’re Notre Dame do you double-up on Tee Higgins (52 REC., 802 yards, 10 TDs) or Justyn Ross (34 REC., 699 yards, 6 TD) and leave sophomore wideout and return man Amari Rodgers (47 REC., 519 yards, 4 TD) open. Do you cover both outside guys and leave Hunter Renfrow (43 REC., 472 yards, 1 TD) to do this thing? Add in talented players like Diondre Overton, Trevion Thompson, and Derion Kendrick and Clemson sends waves of speed and experience at opposing secondaries.

Like the Irish, Clemson wants to establish the run and open up the passing lanes. That running game starts with Travis Etienne, who finished seventh in Heisman voting. Etienne has 1,463 yards rushing, averaging 8.3 yards a carry with 21 rushing touchdowns. Freshman Lyn-J Dixon was second on the team in rushing with 536 yards, averaging 9.6 yards per carry.

If the Irish crowd the box to stop the run, Lawrence and the receivers will burn them on the outside. If Etienne is able to run free, the Tigers will keep swinging that hammer all night. Either way, I think the Tigers have too much speed.

Like many of the teams Clemson has played this season, the Irish are good on special teams. Kicker Justin Yoon is a four-year starter and has hit 16 of 20 field goal attempts. Senior punter Tyler Newsome ranks 15th nationally (44.4 AVG), while Jonathan Doerer is the kickoff specialist and has 25 touchbacks in 56 attempts. The Irish are average in the return game.

The Tigers have gotten production from kicker Greg Huegel (9 of 13) and kickoff specialist BT Potter (67 touchbacks) but have struggled with punter Will Spiers, who is averaging just over 39 yards per kick. Amari Rodgers has returned one punt for a touchdown, while Kenrick is emerging as a dangerous kickoff return threat.

The Irish want to prove they belong here and they have the confidence to pull off the upset. Head coach Brian Kelly is playing the disrespect card, and while the players said all of the right things this week, there is an edgy undercurrent to many interviews. The stadium should be pro-Irish and they will have several intangibles on their side.

What they don’t have is experience on this stage, and while they might come out and hit some big plays, the Tigers are simply the better team and have too many explosive playmakers and too many weapons. The offense hit a different gear about midseason and will score as many points as needed Saturday.