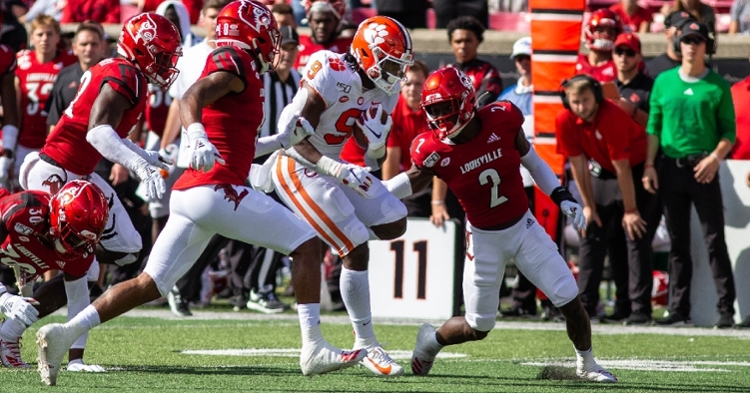 Camp is scheduled to start a week from today (Wednesday), and as of now is still scheduled for that day. However, the ACC is meeting today and over the next few days to decide on a schedule and if the season is delayed – a real possibility – camp could be delayed a week or even two.

What we do know is this – if the season is played Clemson will once again be the favorite to win the Atlantic Coast Conference and contend for a national title. The Tigers just have to be given the chance.

Today we take a quick look at the offense, and then we will take a look at the defense and between now and camp will break down the position groups.

For most programs across the country those are crippling losses. Clemson isn’t most programs. Head coach Dabo Swinney retooled the coaching staff and now the offense belongs to Tony Elliott, who will receive input from the other offensive assistants and his head coach. However, the offense is his and it will be interesting to see if he blooms even further.

One thing I love about Elliott is that he isn’t afraid to admit he made a mistake — a rarity in the coaching world – and he told us during the spring that running back Travis Etienne should have gotten the ball a lot more in second half of the National Championship. Etienne is back and should be a Heisman Trophy contender.

Last year’s offense sputtered at times early, but barely missed matching the record-setting 664-point run in 2018 with 659 last year. The Tigers scored more than 50 points seven times before the CFP with a run of 45 or more in seven of the final eight regular season games.

A lot of that talent is back with Etienne and some other Heisman contender you might have heard of named Trevor Lawrence. Lawrence had his struggles early last year, but after a short sideline conversation with Swinney after an interception at Louisville, turned in a stellar season. Lawrence hit 66% of his passes for 3,665 yards and 36 touchdowns with eight picks and adding 563 rushing yards – gashing Ohio State for 107 yards in the Fiesta Bowl – with nine touchdowns.

Backing up Lawrence are Taisun Phommachanh – who just looked different in a good this spring – and 5-star freshman DJ Uiagalelei.

He has put together an amazing career – he’s amassed 4,038 yards and 56 touchdowns, caught 54 passes for 567 yards and six scores, and averaged 7.8 yards per carry. He’s also fast enough to run away from any defender in the country and big enough to run any of them over.

There is talent behind him with Lyn-J Dixon (635 yards and six scores) and Chez Mellusi and Mikey Dukes. Add in 5-star talent Demarkcus Bowman and this group is as loaded as any in the country.

Left tackle Jackson Carman is the lone returning starter along the offensive line, but the backups who must now move into starting roles (Matt Bockhorst, Cade Stewart, Will Putnam, and Jordan McFadden) all played last season and earned valuable snaps. Add in a slew of backups and freshmen and there is plenty of talent, they just have to learn to play together.

The tight end spot will be interesting. Braden Galloway looks to move into the starting role after starring in his postseason return from suspension, but there is also plenty of talent to work into the mix behind Galloway.

The receivers will have to grow up, but most programs can only dream of a potential starting group of Amari Rodgers, Joseph Ngata, and Frank Ladson or Cornell Powell. Four-star recruit EJ Williams would be the star of most camps but has to work himself into the rotation, along with a bevy of other youngsters.

Yes, this group is young in a lot of spots. But this offense has two legitimate superstars in Lawrence and Etienne and more on the way. All they need is the chance.

And for the record, I am not advocating that there is football regardless of risk. The ACC and the school will make the right decision. I am simply saying I hope this team gets the chance to show how good it can be.