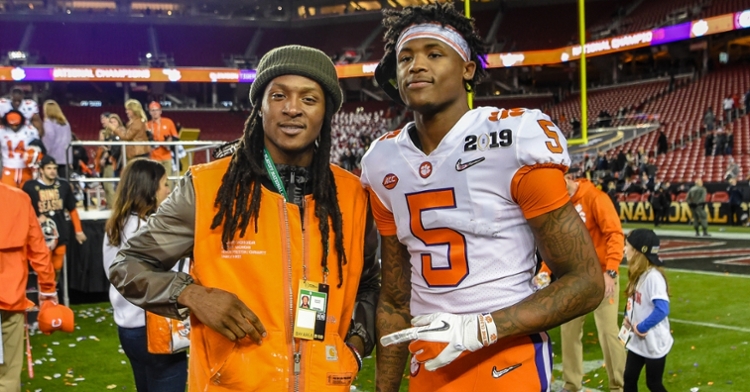 Clemson head coach Dabo Swinney promised that the last decade would be the best in Clemson and he was right. Throw two National Championships on top of all of the other accolades and accomplishments and it was fun as you can in any ten-year stretch.

There were also a lot of great players along the way.

We marveled at the poise of Deshaun Watson, the gritty determination of Ben Boulware, the fluidity and speed of Sammy Watkins at full speed, the bulldog tenacity of Wayne Gallman, and the pure joy of Christian Wilkins and Clelin Ferrell.

It was an amazing decade, and we decided to take a look back at just a few of the players that thrilled us all. The staff at TigerNet cast a ballot each and Brandon Rink tabulated the results. Honestly, you can’t go wrong with any of your picks.

But it sure is fun to talk about.

There are two really tough offensive positions in the fight for a first-team spot with quarterback and wide receiver.

A second national title and a 30-0 mark in games played would certainly have given Trevor Lawrence a strong case, but he will instead get his shot to campaign for the next decade in the 2020 season. Tajh Boyd was a foundational piece to the Dabo Swinney era and left the collegiate field as the ACC record holder with 133 total touchdowns and 107 passing TDs and No. 1 in the school record books also in passing efficiency, passing yards, passing attempts and completions, completion percentage, total offensive yards, wins and top-25 wins.

The receiver position holds three first-round selections in Sammy Watkins, Mike Williams and DeAndre Hopkins, as well as maybe another to come in Tee Higgins this April. In all, 11 Clemson receivers from the last decade were on NFL rosters last season, including a forever Tiger legend in Hunter Renfrow after his clutch play (especially in the postseason).

In our first-team selections, Watkins gets a nod after earning first-team All-America in each of his three seasons; big target Mike Williams is there after putting together two highly-productive campaigns around missing a season due to injury, totaling 155 catches for 2,391 yards and 17 TDs combined in 2014 and 2016; and DeAndre Hopkins makes the tough cut bolstered by the exclamation point that was his senior campaign, which included an ACC-record 18 touchdown catches and the school’s single-season receiving mark (1,405).

Tight end is another interesting position with Mackey Award winner Dwayne Allen having a case (598 yards/8 TDs in one season in Chad Morris’ offense), but Jordan Leggett was a steady force in Clemson’s Playoff runs in 2015-16 (1,261 yards/15 TDs/14.7 YPC).

Clemson’s record-holder in virtually every rushing category is also the lone current Tiger on the all-decade team with rising senior Travis Etienne, who is set to only build on those stats to maybe unattainable numbers in 2020. The versatile Andre Ellington picks up the nod for the all-purpose spot with his ability as a rusher, receiver and returner (over 4,500 career all-purpose yards, the majority over his three seasons in the 2010s).

Three-time All-ACC pick and former walk-on Chandler Catanzaro holds the placekicker role after knocking through 77.4 percent of his 40-plus yard kicks (24-31) and making a school-record 20-straight field goals during the 2011-12 seasons, leaving the field second in ACC history in points (404).

Clemson’s 2010s defensive line depth is just ridiculous and a slew of all-conference and NFL reps are being left off to form a starting group.

Christian Wilkins leads the way on the interior after three first-team All-America honors, including a unanimous vote in 2018 and posting 41 tackles for loss, 16 sacks and pass breakups each and 56 QB pressures over four seasons. The ever-underrated Grady Jarrett isn’t under-the-radar here for a first-team role, after earning a smattering of honors in three play-making seasons as a starter (21 TFL/156 tackles as a junior and senior).

Isaiah Simmons was everything Clemson needed defensively and more in a unanimous All-American and Butkus Award-winning 2019 season with team-best marks in tackles (107), tackles for loss (16), sacks (8), QB pressures (15) and pass breakups (10). Anderson native Ben Boulware picked up national and conference honors in both seasons as a highly-productive starter, tallying 352 career tackles (26 for loss) with 8.5 sacks and 15 passes defended (five interceptions). The versatile Dorian O’Daniel paved the way for Simmons’ role with the Tigers as a standout in coverage and against the run, posting 20 tackles for loss, nine passes defended and over 140 total stops as a starter. Kendall Joseph earned the same amount of votes as O'Daniel for a starting spot -- the BHP product grabbing All-ACC honors each season as an upperclassmen and totaling 306 stops (23.5 for loss) over his career.

At cornerback, Mackensie Alexander’s coverage skills show most in the end zone, where none of his targets scored a TD over his final 23 games. He earned All-American and first-team All-ACC honors in 2015. Another top cover corner in AJ Terrell gets the other nod after All-ACC selections as a starter over the last two seasons.

Clemson’s departing duo at starting safety also occupy those spots for the all-decade team, in K’Von Wallace and Tanner Muse. Muse picked up an All-American nod after a team-best four interceptions and also tallying 73 stops (six for loss). He made 39 starts in 59 games as a Tiger. Wallace patrolled the secondary for 36 starts in 59 games and broke up 21 passes and picked off five more, including one for a TD (Muse had one of those too).

Punter Bradley Pinion led the ACC with 28 punts inside the 20 (a Clemson record) and boomed 17 of his attempts over 50 yards in his junior campaign before an NFL jump.