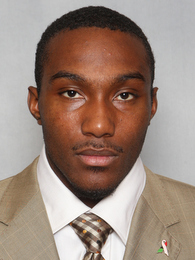 Cornerback
B I O
Cornerback who elevated his level of play from special teams contributor as a freshman to All-American cornerback as a senior ... amassed 149 tackles, nine interceptions and 22 pass breakups in 1,906 snaps over 55 games (30 starts) in his career ... appeared in more career games than any member of the 2016 senior class, second-most in Clemson history behind only Chad Diehl (57).

2016: Semifinalist for the Jim Thorpe Award and Bednarik Award ... first-team All-American by Pro Football Focus and USA Today ... third-team All-American by the Associated Press ... fourth-team All-American by Phil Steele ... first-team All-ACC (media, coaches) ... named to ESPN's All-Bowl Team ... had 65 tackles, four interceptions, six tackles for loss and 11 pass breakups in 861 snaps over 15 games (15 starts) ... posted two tackles for loss and a pass breakup in season opener at Auburn ... posted three pass breakups in win over Troy ... had pass breakup and four tackles against No. 3 Louisville ... broke up a pass and had five solo tackles in win over NC State ... snagged first interception of the season against Syracuse ... produced seven tackles, including one for loss, versus Pittsburgh ... had pass breakup at Wake Forest ... had two interceptions, including the game clincher on fourth down inside the final 90 seconds, of thrilling win over Virginia Tech in ACC Championship Game ... had interception in the redzone against Ohio State, helping preserve a 31-0 shutout in the Fiesta Bowl ... posted six tackles and a pass breakup in National Championship win over Alabama.

2015: Third-team All-ACC (media, coaches) ... led team with five interceptions and 11 pass breakups ... Renwick-Flanders Most Improved Award on defense ... tied for 20th in the nation in interceptions ... had 60 tackles in 887 snaps over 15 games (15 starts) ... also had 3.5 tackles for loss ... had five tackles, 1.5 for loss, in his first career start against Wofford ... had a breakout performance at Louisville with his first career interception and three pass breakups ... earned co-defensive player-of-the-game honors with Kevin Dodd for his effort ... tallied one pass breakup in win over Notre Dame ... second career interception was against Georgia Tech, which he returned 10 yards ... had a sack and PBU in Boston College win ... scored first career touchdown at Miami on a 36-yard interception return ... broke up two passes at NC State ... added his fourth interception in win over Wake Forest ... came up with fifth pick on the opening second-half drive against North Carolina in the ACC Championship Game ... tallied six tackles and two pass breakups in the Orange Bowl against Oklahoma ... had five stops in the National Championship Game.