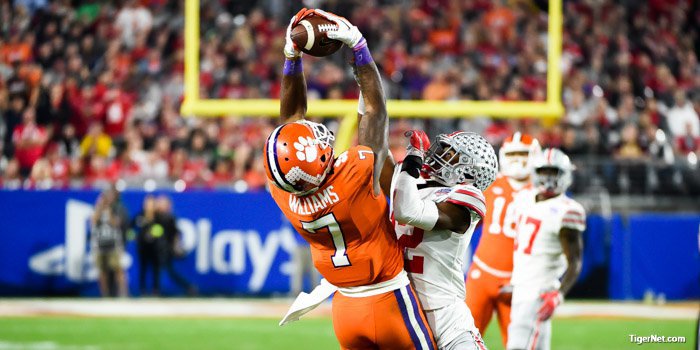 C.J. Fuller flexes his muscles after a score

GLENDALE, AZ – The Tigers get their rematch with Alabama.

Second-ranked Clemson ran around, over and through third-ranked Ohio St. in defeating the Buckeyes 31-0 at the Playstation Fiesta Bowl Saturday night at University of Phoenix Stadium, setting up a replay of last year’s title game against Alabama.

The National Championship Game will be held Monday, January 9, at 8:00 PM on ESPN. The game will be played at Raymond James Stadium in Tampa, Florida. Alabama beat Washington 24-7 in the Peach Bowl earlier Saturday. It’s the first rematch in the title game in the history of college football.

The win was a dominant one for the Tigers -

Carlos Watkins had a sack in the fourth quarter, giving him 10 ½ sacks on the season, breaking the record for a Tiger defensive tackle set by William Perry and tied by Michael Dean Perry.

"What a night. What a night. What a journey. I just can't tell you how proud I am of our team, our staff. I mean, just incredible resolve, relentless pursuit to get back here and to try to find a way to win," head coach Dabo Swinney said after the game. Just awesome. Man, I'm just happy to get a win in Arizona. I got my butt kicked in 1990, and obviously we came up short last night. 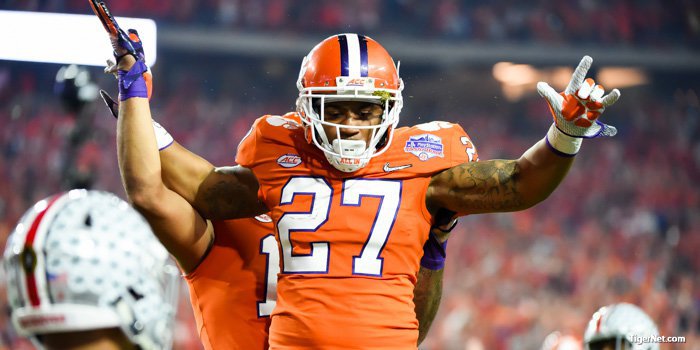 C.J. Fuller flexes his muscles after a score "

"So it's nice to finally win one in Arizona. Just really, really proud of our team. I'm so proud and happy for our seniors. Those guys got their 48th win tonight. And, I mean, just an incredible group to work with every day. I'm so proud of them."

Swinney then said it's a special time to be a Tiger.

"I mean, back-to-back ACC titles and CFPs and now National Championship appearances," he said. "It's just a special moment, special time to be a Tiger. But these guys have earned it. They've been working for a long time to be ready for these type of moments and opportunities, and they dominated the moment tonight. That's what it's about.

"They exhausted and dominated the moment that was in front of them. And just really, really proud of them. Offensively, really, it was just a great team effort."

The Buckeyes got the first big break of the game, and it came on Clemson’s second play. Watson attempted to lob a pass out to Mike Williams, but Williams fell down and the ball was picked off by Ohio St.’s Gareon Conley at the Clemson 33-yard line. The Clemson defense held, giving up just one yard in three plays, and Ohio St.’s 47-yard field goal attempt sailed wide right.

The Tigers got a 37-yard throw from Watson to Williams on the next position that gave Clemson possession at the Buckeye 30, but the Tigers settled for a 45-yard field goal from Greg Huegel for a 3-0 lead with 9:16 to play in the first quarter.

A long kickoff return set the Buckeyes up in Clemson territory, but the Clemson defense once again held tough and the Buckeyes missed a 47-yard field goal that kept the score at 3-0.

The Tigers got another big pass from Watson to Williams – this one for 26 yards – and a nine-yard throw to Renfrow to put the Tigers at the Buckeye one. One play later, Watson faked the handoff to Gallman and ran untouched over the left side for a 10-0 lead with a little over two minutes remaining in the game.

Clemson’s defense continued to dominate, and the Tigers got the final points of the half with just under four minutes to play in the half. Clemson put together an eight-play, 83-yard drive that featured a 33-yard run by Watson. Four plays after the run, Watson dropped a 30-yard pass over the shoulder of C.J. Fuller in the end zone for a 17-0 lead.

The Tigers got the first big break of the second half – a fumble by Ohio St. – and advanced as far as the Buckeye two-yard line before settling for a Huegel field goal attempt. It went wide left, and the Tigers held the 17-0 lead with 9:02 to play in the third quarter.

Clemson had two more chances to put the Buckeyes away, but sacks ended both drives. They finally broke through late in the third quarter. Following another Buckeye punt, the Tigers marched 40 yards in five plays, with Watson carrying it in from seven yards out for a 24-0 lead with 2:06 to play in the third quarter.

Two pass interference penalties gave the Buckeyes the ball deep in Clemson territory for the third time on the night, but the defense once again made a critical play. This time it was cornerback Cordrea Tankersley, who intercepted Barrett to end the drive.

The Buckeyes drove deep into Clemson territory on the ensuing drive, but a sack by Carlos Watkins forced the Buckeyes into a 4th-and-27 at the Clemson 33. Barrett dropped back to pass and was intercepted by Van Smith in the end zone, and Smith returned it 86 yards. Two plays later, Gallman bounced it in from seven yards out and Clemson led 31-0 with 8:51 to play.