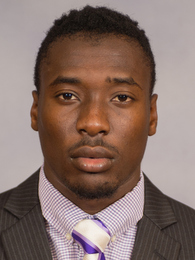 Cornerback
B I O
Redshirt freshman who was one of the most highly-touted players in the 2013 signing class.

Before Clemson: Rated as the No. 4 overall player in the nation by ESPN, the highest rating by a Tiger signee since Da’Quan Bowers was rated No. 1 in the class of 2008 ... No. 2 defensive back in the nation and No. 2 player in Florida by ESPN ... No. 34 player in the nation by 247Sports.com, No. 42 by Rivals.com and No. 71 by Scout.com ... No. 4 cornerback in the nation by 247Sports.com ... consensus top-10 player in Florida ... played in the U.S. Army All-American game ... first-team all-state selection ... helped his Immokalee High School team to an 11-4 record and a berth in the AAAAA title game in 2012 ... had 51 tackles, four interceptions, two caused fumbles and one recovered fumble as a senior ... had 42 tackles and three interceptions as a junior ... had 139 tackles and 10 interceptions in his career ... ran track and rated among the top-15 wrestlers in Florida in his weight class ... from the same high school that produced former Miami (Fla.) All-American Edgerrin James ... coached by Jerrod Ackley at Immokalee High School ... his twin brother, Mackenro, signed with Auburn ... recruited by Tony Elliott.