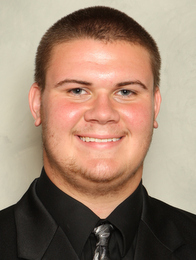 2015: Second-team All-ACC (media, coaches) ... three-time ACC Offensive Lineman-of-the-Week, a first for a Clemson lineman since 1989 (Stacy Long) ... Renwick-Flanders Most Improved Player on offense ... had 25 knockdowns in 1,092 snaps over 15 games (13 starts) ... came in to relieve an injured Ryan Norton in the opener against Wofford and logged 40 snaps ... graded 90 percent for the game ... posted three knockdowns in 50 snaps versus Appalachian State ... played all 65 snaps against Notre Dame, with two knockdowns ... named co-offensive player-of-the-game by the coaches ... graded 92 percent in 61 snaps in win over Georgia Tech named ACC Offensive Lineman of the Week, his first career honor ... played 78 snaps and graded 88 percent against Boston College, again earning ACC Offensive Lineman of the Week recognition ... graded 90 percent at Miami and was a big reason the Tigers rushed for 416 yards ... played all 80 snaps and graded 89 percent in win over NC State, where the Tigers compiled 623 total yards ... graded 91 percent in win over Florida State ... also graded 91 percent at Syracuse, with three knockdowns ... posted team’s best grade at South Carolina (93 percent) ... played all 98 snaps of the ACC Championship Game, with a 92 percent grade ... played 90 snaps in the Orange Bowl against Oklahoma, grading 89 percent with three knockdown blocks ... had a pair of knockdowns in the National Championship Game, grading 88 percent versus Alabama.

Before Clemson: Rated as the No. 89 player in the nation, No. 1 center in the nation and No. 1 player in Tennessee by ESPN ... first-team All-American by ESPN, MaxPreps.com and Sports Illustrated ... No. 6 center in the nation by Rivals.com ... helped Maryville High School to the state title each of the last two seasons ... Mr. Football Lineman-of-the-Year in Tennessee ... played in the Under Armour All-America game ... county player-of-the-year ... led his team to a 15-0 record as a senior, as his team was ranked No. 11 in the nation by MaxPreps.com ... first commitment to Clemson’s 2012 class ... coached by George Quarles at Maryville High School ... recruited by Dan Brooks.