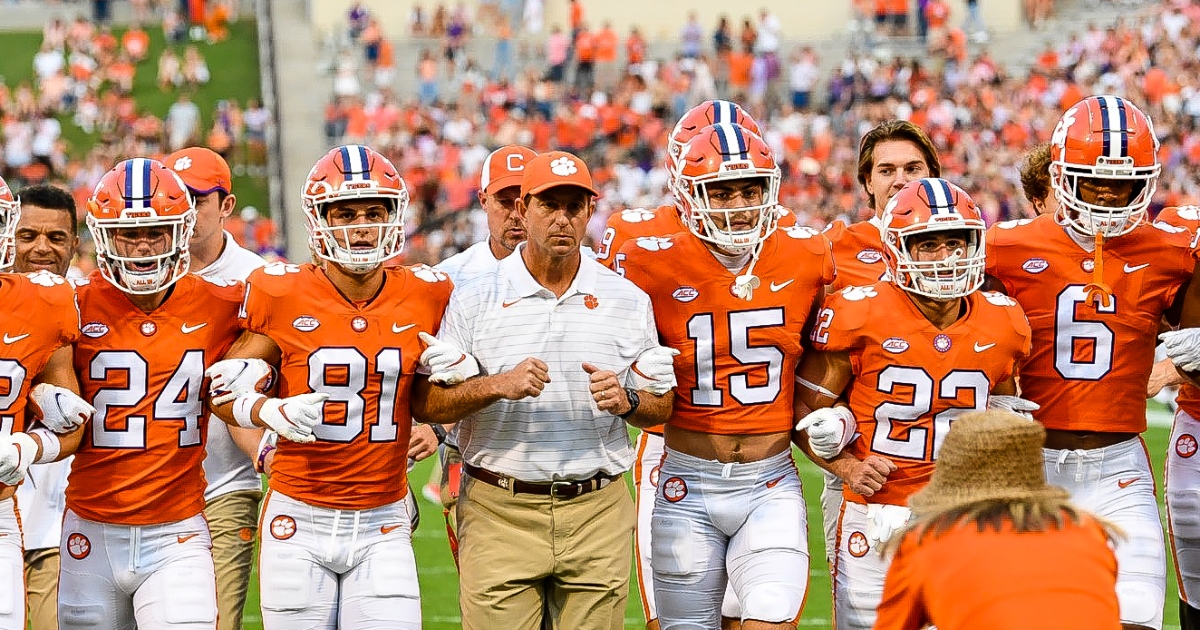 Swinney says he's "concerned" about the offense going into the weekend, but he calls on Tiger fans to "keep the faith."

Clemson is in some rare territory for the program lately under Dabo Swinney, but the Tigers' head coach is hoping the Clemson faithful has some longer memories.

His Tigers are underdogs in the regular season for the first time since 2016 going to No. 23 Pittsburgh this weekend (3:30 p.m./ESPN). Sitting at 4-2 overall and 3-1 in ACC play, the margin is thin for the bigger goals in play.

"Listen, there’s a chance we may not make our seventh Playoff in a row. There’s a possibility. Anything can happen," Swinney said on his call-in show Monday. "Are the kids playing hard? Are they battling? Absolutely. We’ve got great young men in this program. We’ve had so many good days. We’ve had some days over the 13 years I’ve been the head coach here. And you know what? The way I look at it is that it’s all good. You’ve got good people in place with great intentions, and sometimes you have moments like this."

Clemson faces one of the most prolific offenses in the country led by super-senior QB Kenny Pickett. Swinney knows the Tiger offense has to wake up to leave Pittsburgh with a win.

"You should be concerned. Yeah, so am I," Swinney told a caller after being asked about the pressure the Panthers put on his offense. "We’ve got to go score points. We’ve got to take care of the basics...That’s been frustrating. But we’re going to get there. But if we don’t score, it’ll be a long night for us. We’ve got to find a way to score some dadgum points and try to keep them out of the end zone the best we can.

"That’s what it’s going to take. It comes down to execution and playing to our capability and that starts with us as coaches."

Swinney said that focusing on the negative aspects of Clemson's start ignores a number of positives he sees.

"Our defense is playing really, really well," said Swinney. "Our special teams is outstanding. We’ve got some individual things going on and our quarterback is getting better. He really has. He’s played his two best games in a row...We’ve got to be better around him. We’ve got to finish some things that are there. He’s really getting better and I’m proud of how he’s working. We’ve had some really good young backs that are growing up. We’ve had some guys get their noses bloodied and it’s going to pay huge dividends for us."

Overall, Swinney is confident in the makeup of his team and coaching staff to turn things around.

"Listen, we’ve got a bright, bright future," Swinney said. "We signed our freshman class this year and freshman last year -- two incredible groups of players that are going to be awesome. We’ve got an excellent staff of people. And I get it, we’ve set a standard and no one’s going to lower that standard -- that’s for sure.

"But, you rally and get behind these guys and you support and be all in. That’s just the way I believe. I wish that you scored every time you took the field and won every game -- and you know what, we’ve won a bunch. We haven’t lost a lot of games. But there’s so much more good than bad. We’ll work through this little funk that we’re in right now and come out on the better side better for sure.

"The biggest thing I say is to keep the faith. Don’t have doubt in what you know. Just pay attention to what’s happened here over the last 13 years. Everybody didn’t just wake up and become a dummy. I promise you that we’re going to get better this year and we’ve got a bunch of great years ahead of us."