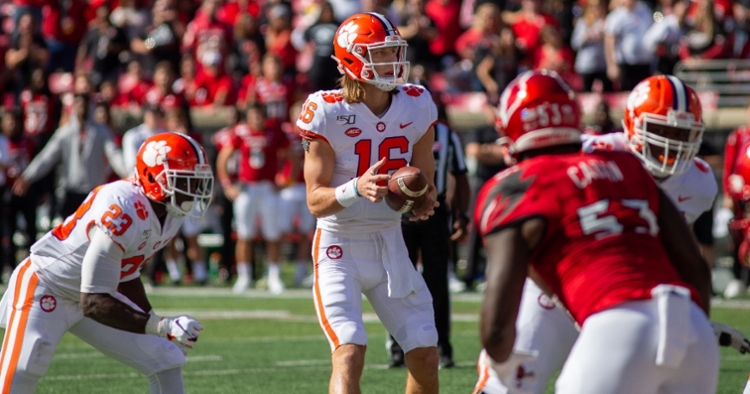 Clemson has now scored 40 points in consecutive games for the second time this season, joining back-to-back contests at Syracuse and vs. Charlotte.

Clemson entered the game having scored 42, 47 and 77 points in its last three meetings with Louisville. With another 40-point performance Saturday, Clemson has now scored at least 40 points in four straight games in a series with an ACC opponent for the first time in school history.

Clemson is now averaging 42.3 points per game against Louisville in six all-time meetings, Clemson's highest all-time average against an opponent presently in a Power Five conference.

Clemson totaled 551 yards and has now produced 500 yards of total offense in back-to-back games for the first time since a two-game stretch last season against these same two teams (Florida State and Louisville).

Clemson rushed for 298 yards and improved to 60-1 when rushing for 200+ yards under Head Coach Dabo Swinney.

Clemson’s 8.05 yards-per-carry average was its second-best of the season, trailing its 8.39 average in the season opener against Georgia Tech.

Clemson has now rushed for 275 or more yards in back-to-back games for the first time this season and the first time since the South Carolina and Pitt games in 2018.

Clemson also surpassed 200 passing yards and pushed its record under Swinney to 46-0 when both passing and rushing for 200 or more yards in both categories in his tenure.

Clemson has now rushed for multiple touchdowns in eight consecutive games for the first time since a nine-game streak to open the 2018 season.

Clemson outgained Louisville in passing yards, 253-107, and has produced more passing yards than its opponent in 10 consecutive games, dating to last season, for the first time since an 18-game streak across the 2015-17 seasons.

Clemson held Louisville to 263 total yards after the Cardinals entered the contest ranked 16th in the country and third in the conference averaging 489.0 yards per game.

Clemson has now held opponents below 300 yards of total offense in seven straight games for the first time since an eight-game stretch in 1956.

Clemson has now recorded multiple takeaways in consecutive games for the second time this season, joining the team’s first two games of the season vs. Georgia Tech and Texas A&M.

Etienne’s 192 yards were the most by a Clemson player against Louisville all-time, surpassing his own mark of 153 set last year.

Etienne recorded his 12th career 100-yard rushing game to enter the Top 5 in school history in the category, tying Andre Ellington and C.J. Spiller (12 each) for fourth on that list. He is now five games shy of Wayne Gallman's school career record of 17 from 2014-16.

Etienne has now rushed for 100 yards in consecutive games for the first time this season and the first time since a three-game streak against South Carolina, Pitt and Notre Dame last season.

With Etienne’s performance and the victory, Clemson is now 43-2 when having a 100-yard rusher since 2011.

Quarterback Trevor Lawrence completed 20-of-29 passes for 233 yards with three touchdowns and two interceptions. He also rushed 10 times for 47 yards.

Clemson as a team has now thrown three or more touchdowns in back-to-back games for the second time this season (at Syracuse and vs. Charlotte).

During the contest, Lawrence (4,814) passed Rodney Williams (4,647) and Kyle Parker (4,739) to move into seventh on the school's all-time leaderboard for career passing yards.

Lawrence’s second touchdown pass of the game was the 43rd of his career, pushing him past Cullen Harper (42) for the fourth-most career passing touchdowns in school history.

By virtue of his 280 combined rushing and passing yards in the game, Lawrence (5,178) became the ninth player in school history to record 5,000 career yards of total offense.

Wide receiver Justyn Ross caught his fourth touchdown reception of the season on a 25-yard pass from Lawrence with five seconds remaining in the first half.

Ross has now recorded a touchdown reception in back-to-back games for the first time since games against Notre Dame and Alabama in last year’s College Football Playoff.

Wide receiver Cornell Powell caught his career-high second touchdown pass of the season on a 10-yard pass from Lawrence in the fourth quarter.

Wide receiver Amari Rodgers recorded a 61-yard reception in the second quarter, his second-longest reception of the season behind an 87-yard touchdown reception against Syracuse.

Running back Darien Rencher scored the first touchdown of his career on an eight-yard touchdown run in the fourth quarter. He became the 13th different Clemson player to record a touchdown by any means this season.

Running back Chez Mellusi added his second rushing touchdown of the season on a 16-yard scoring run in the fourth quarter.

Defensive tackle Nyles Pinckney recorded the team’s second takeaway of the game, grabbing a fumble forced by defensive end Justin Foster in midair. It was the second fumble recovery of Pinckney’s career and his first since recovering one against Georgia Southern in the third game of the 2018 season.

On the play, Foster recorded the first forced fumble of his career on the sack.

Foster added his career-high second sack of the game in the third quarter.

Cornerback A.J. Terrell recorded his first interception of the season in the fourth quarter, his first since the College Football Playoff National Championship Game against Alabama last season. He now has five career interceptions.

Linebacker Isaiah Simmons tied his career high with 2.0 sacks, matching his performance at Syracuse earlier in the season. It was his second career multi-sack game.

Simmons now has 6.0 sacks this season, adding to his single-season career high.

Defensive tackle Tyler Davis recorded his fourth sack of his freshman season in the third quarter.

Linebacker Chad Smith recorded his second sack of the season in the third quarter.

Kicker B.T. Potter opened the game’s scoring with a 51-yard field goal on Clemson’s first offensive possession. It tied his career long set in the season opener against Georgia Tech. With Potter’s field goal and the victory, Clemson is now 44-0 when scoring first since 2015.

Potter’s second field goal of 50-plus yards this season pulled him within one of the single-season school record of three, set by Richard Jackson in 2009.

Clemson earned its sixth win against a Power Five opponent this season. Clemson’s six Power Five wins this season are the most in the country.

Clemson pushed its all-time record against Louisville to 6-0. It marks the fifth time all-time (and the second time against a school presently in the FBS) that Clemson opened a series against an opponent with six consecutive wins. The Tigers previously won each of their first six all-time contests in series with The Citadel, Furman, Newberry and Virginia.

Clemson improved to 3-0 all-time on the road at Louisville.

Clemson has now won 31 of its last 32 games against ACC Atlantic Division teams.

Clemson has now won 68 of its last 70 games against unranked teams.

Clemson has now won 75 straight games when holding teams under 23 points (dates to 2010).