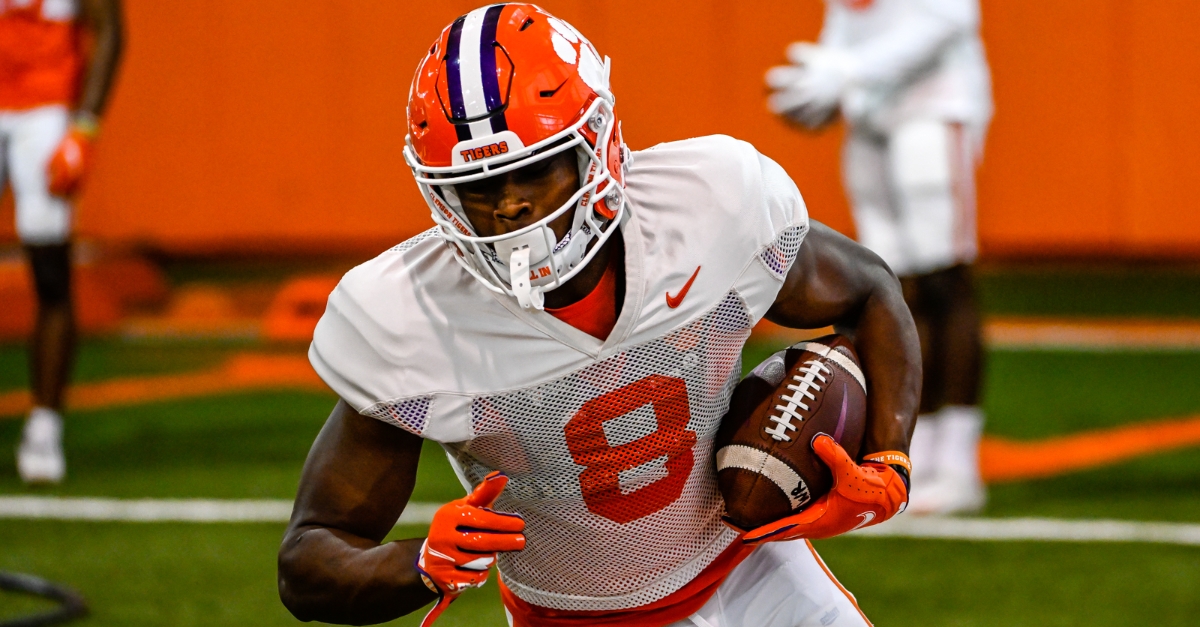 CLEMSON – Suffering a torn ACL is not the way anyone wants to start their college football career, but it makes the work and the return all the sweeter.

Freshman wide receiver Adam Randall tore his ACL during spring practice, worked and rehabbed all summer, and made his return to the field under the lights against Louisiana Tech last Saturday night.

Simply put: it was a dream come true.

"Ever since I was a little kid, it was a dream come true just coming down the hill and playing for Clemson," Randall said during Monday's interviews at the Reeves Football Complex. "It's been a dream for me for a long time. Ever since I got hurt, I never knew a timeline for when I would be back. I felt like I attacked rehab and got back faster. Being able to get back for week three and being able to play under the lights, and having amazing fans was amazing. It was a really exciting night for me. I couldn't ask for anything better.

"It was everything I dreamed of. Once I got out there for the first couple of plays, it was different than high school and other times you play football, but once you get into the flow of the game, everything else goes away, you block out the noise, and it just becomes football again."

The Myrtle Beach (SC) native turned heads early in spring practice, but like most ACL injuries, a non-contact play stopped him in his tracks.

"Going back to the spring, we had a great plan, and I had great coaching," Randall said. "Coach (Tyler) Grisham and Coach (Dabo) Swinney were really bringing me along in the spring. I felt like I was doing really good. It's something you can't plan for, and it was unexpected. I really didn't think that it was an ACL at the time. When it happened, and I got the news, it was devastating.

"It was tough in the moment, but Coach Swinney reassured me that we have the best training staff, the best equipment, and the best place for me was to be here. Once I got the news, I knew I was going to be able to rehab and get back better than ever. That's what I did. They told me my summer would be a little different but to attack the rehab and attack going into the training room. Just taking the mindset that I would have on the football field and in the weight room and take it into the training room, and I would be okay."

Shortly after receiving news of the injury, Randall reached out to former Clemson and current Green Bay Packers wideout Amari Rodgers for advice and guidance on how to attack his new reality.

"The second day after, someone gave me Amari's contact information, and I reached out to him," he said. "He hit me back pretty quickly. He told me to do certain things with my knee. He told me to take the mindset that I have on the field and in the weight room and apply it to the training room. We still keep in contact, and he's a really great resource to have.

Randall heeded Rodgers' advice and spent nearly every day of the offseason in Clemson in the training room, making his No. 1 priority to return to the field as quickly as possible.

"A lot of rehab. I didn't go home a lot this summer, or as much as a lot of guys did," he said. "I maybe spent ten days at home this summer. I attacked rehab and was here every day with Pat Richards - our new trainer. He had a really good game plan for me and progressing me really well. I just put my mind to it to get back faster than ever. I was up here two or three hours a day. I knew that's what I was going to take. It wasn't anything that I did personally. It took a lot of outside help."

Now, just five months post-injury, Randall is back and better than ever.

"If I wasn't confident in my abilities, I wouldn't have stepped foot back on the football field," he said. "I'm 100-percent confident in my knee and my ability to go out there and play and perform, so I'm definitely feeling great and feel good after the game I played Saturday."