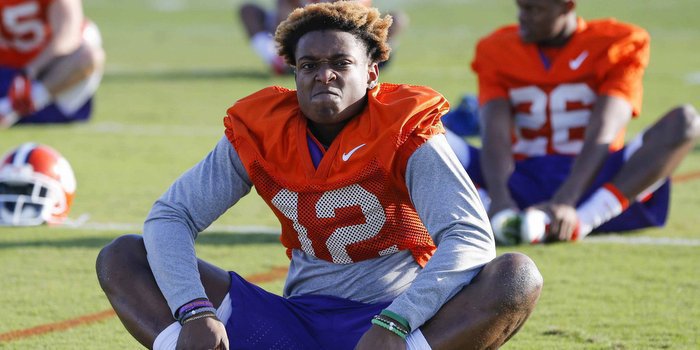 Wallace is one of the leaders of Clemson's secondary

CLEMSON- Tough love and God have shaped K’Von Wallace into the man, and football player, he is today.

Despite the tough love defensive coordinator Brent Venables is known to give his defense, Wallace doesn’t seem to mind and knows the love is there.

“Ya’ll see it, he’s been hard on us but he’s always been hard on us. Last year was my first year, but that’s just who he is,” Wallace said during spring practice. “He’s never satisfied and we’re not either. You take it and run with it.”

Despite all the love that is there, Wallace, and the rest of Clemson’s defense still knows it’s better to bite your tongue than to poke the bear.

“You just, like I said, you bite your tongue, you learn from it. We respect him, as he respects us. You never come out of line. Just listening to him and taking it as it is,” Wallace told TigerNet.

Wallace is no stranger to this style of coaching. His high school coach, Loren Johnson had a similar mindset, which K’von grew to love.

“Yes, my high school coached me like that, a father figure. He did that to me in high school,” Wallace said. “So, I’m just from another culture that’s all it is, it’s still family, he loves me just like I love him.”

It seems to have paid off. Wallace was all-state selection on both sides of the football, at wide receiver and defensive back by the Virginia High School Sports League. Wallace’s contribution to offense and defense didn’t stop there, with five receptions and an interception in the Virginia 5A state championship, Wallace has proven to be an asset to any team his is on, including Clemson’s.

Wallace’s past two years as a Tiger have been impressive with six tackles and an interception as a freshman, and 36 tackles, an interception, and four pass break-ups as a sophomore. Wallace’s experience has gained him “Old Man” status with the Clemson defense.

“Yeah, just leading those guys, being more vocal, teaching instead of just learning, and things of that nature. I feel like I was made for this position,” he said, “to be the vocal leader, to teach and learn from other guys. I feel like God made me the guy I am today to be a leader on this team and to lead this team to a championship, and we want to do that this year.”

Lack of depth at Corner has been a growing concern for this young defense. With the season approaching, and the sense of urgency having been up for debate, Wallace assured TigerNet, between the returning veterans, and the impressive young talent, “we’ll be fine.”

“I believe we have always had that sense of urgency no matter who’s back there. It’s a little more intense of course, a lot more plays are made, especially for the starters, but we’ll be fine,” Wallace said.