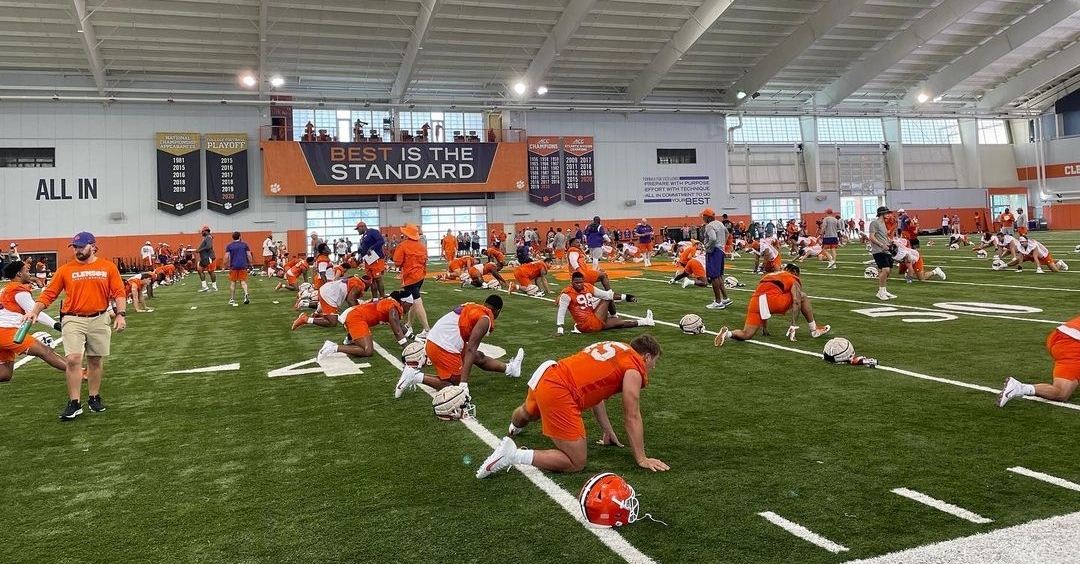 Clemson returned to the practice fields behind the Reeves complex Friday afternoon, the first practice of fall camp. Temps hovered in the mid-90s, but the skies were bright blue, the grass was a deep green, and the Tigers looked more like the Tigers we are used to seeing than we did at any point last season.

We were allowed to watch the first seven (and part of an eighth) periods of practice, and even though it was just helmets and shorts, we have some notes to pass along.

I will start with how this team looks – this team looks like the teams from a few years ago in terms of athletic ability and size. So many players were hurt last season, yes, but this group just looks like a big-time team. From the defensive line to the offensive line to the running backs to the linebackers, it’s an impressive group. Yes, just shorts, no live contact. But this group looks more like the 2018 group than any team since.

Center Ryan Linthicum looks the best he’s looked since he’s been here (something Swinney mentioned in his press conference), and Dietrick Pennington doesn’t look like he weighs 360 pounds. I was told his body fat percentage is under 20-percent.

Another one that stood out – right off the bat – was linebacker Trenton Simpson. One of the first drills run by linebackers coach/defensive coordinator Wesley Goodwin had the backers line up with their hands in the dirt and then come off the snap, simulating getting to the quarterback. Simpson, who checked in at 240 pounds on Thursday, was explosive. That entire linebackers group will make you sit up and take notice.

*It wasn’t all great – Swinney mentioned that he has questions about punter on Friday, and during the time we were allowed to watch, none of the punters stood out.

*The Atlanta Falcons had a scout in attendance.

*As I was walking in, I passed Georgetown’s Lorenzo Bromell, who played at Clemson. The defensive end played for the Dolphins and Vikings, Raiders, and Giants, and is remembered for breaking Peyton Manning’s jaw back in 2001. He was in town and took a tour of the facility.

*Swinney spent time with the wide receivers, along with Tyler Grisham, teaching “the best move in football,” which was a technique getting off the line. The receivers started the drill with their hands behind their backs with footwork being the key.

*Quarterback DJ Uiagalelei ran full-speed from the indoor facility to the practice fields, and then ran full-speed in between drills. You can tell he’s moving better without the extra weight and all the braces. Backup Cade Klubnik was impressive during the passing drills, and it’s obvious he feels more comfortable with the offense.

*Watched the defensive line for a few minutes – you’re always gonna be impressed with guys like Bryan Bresee and Myles Murphy, but it’s obvious that younger players like Payton Page and Tré Williams are ready to take that next step. Williams has toned his body and looks explosive.

*There were 17 members of the Dabo Swinney All-Access fantasy camp on hand. The 17 pay $10,000 each to have access to practices and meetings. The proceeds go to the All In Foundation. In the past, the members would play football, but that has changed to more of an all-inclusive event.

We really love this game. pic.twitter.com/6U4LQgDZti