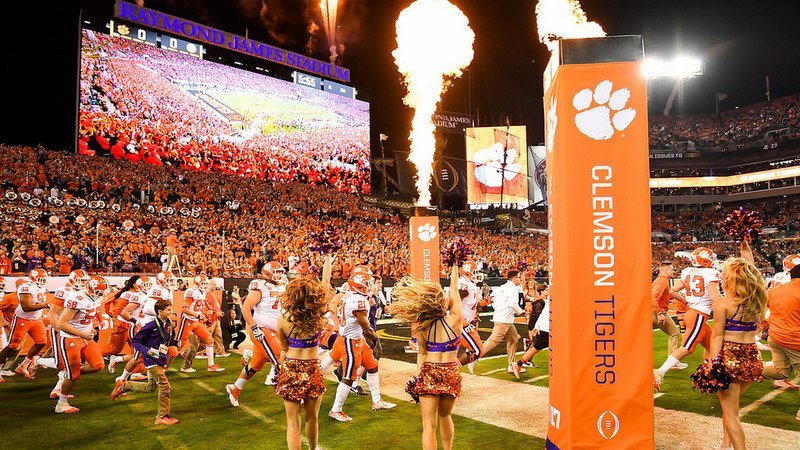 NEW ORLEANS, LA – Trainer Eddie Futch leaned into Joe Frazier, took in the heavyweight’s swollen and bloody face, and told him, “It’s all over. No one will forget what you did here today.” In the far corner, Muhammad Ali raised his hands in the air, exhausted and triumphant.

Will Clemson and Alabama have the same drama?

The above scene came at the end of the 14th round of the Thrilla in Manila, the third fight between Ali Frazier. Ali, the brasher of the two fighters, lost the first fight to the humble son of a South Carolina sharecropper in 1971. Ali won the second fight in 1974, setting the stage for the third and final fight.

Frazier won the middle rounds, the heart of a champion still beating in his chest, but Ali’s speed and tempo took its toll in the heat and humidity of the Philippines, prompting Futch to call off the fight before the final round.

ABC/ESPN college football play-by-play man Joe Tessitore loves boxing history, but he also loves college football. Along with Todd Blackledge, he will be on the call for Monday night’s Allstate Sugar Bowl between Clemson and Alabama. Alabama won the first fight, Clemson won the second and the third will be Monday night.

Tessitore loves the comparison of the two battles.

“I think when you look at the annals of trilogies in the modern sports era, there’s one that stands out as the all-time greatest and that’s Ali-Frazier,” Tessitore told TigerNet Saturday on the floor of the Superdome, where Mondays drama will play out. “But what was so unique about Ali-Frazier is that it stands the test of time and why it’s a far better trilogy than anything the Celtics-Lakers did or modern NBA or NFL trilogies is the parallels of one team wins one way and have certain personality traits and characteristics, much like Joe Frazier would be Alabama.

“One team wins the next way in the way that Ali was brasher and fun-loving, the way Clemson and Dabo win. Now you get the rubber match. I think that the personalities of both coaches and the fact that you have the establishments and the grand tradition of Alabama and the new rich and new money of Clemson on the upswing makes it so dynamic, Then, the fact that the College Football Playoff era just got underway, so at the same time that the trilogy is taking place, it aligns with this great birth of the College Football Playoff. I think it’s going to be something that we reflect on 20 or 30 years from now and say that era of college football when Bama and Clemson ruled everything and the College Football playoff was ascending. I can see a 30-for-30.”

Tessitore said Clemson is on the cusp of becoming college football’s model program.

“There is a good argument that could be made. Clemson has great football tradition going back 100 years,” he said. “The series goes back 100 years because they started playing in 1900. Clemson is a team that has won a national championship and has all-time great players, but this recent run of Clemson football in a time when many of us were doubting if anybody could really be what Alabama has been as a program. It has to be recognized and it has to be acknowledged.

“They’re doing it in a slightly different way and in a slightly different approach, but if you look at recruiting and the commitment university-wide to facilities, to infrastructure, to understanding what it takes to be all in from top to bottom, it runs parallel to the same exact stuff that was put forth in 2007 in Tuscaloosa, Alabama of here’s what it’s going to take, here’s the level of commitment from the entire university all the way down to trainers and equipment managers. Yes, I do think there’s an argument to be made. I’m not saying they’re usurping them, but I’m saying that you could say that these are the two programs that are now defining where the sport is.”