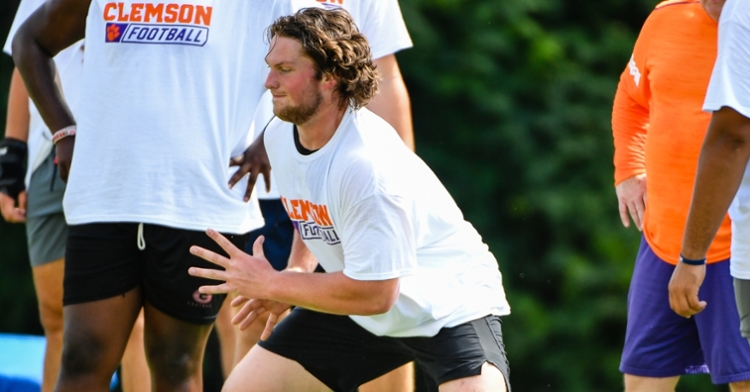 Blake Miller enjoyed the Elite Retreat so much he wanted to commit to the Tigers a second time.

He enjoyed every minute of it, starting with the camp.

“Being back on campus and being back with all the coaches is great,” Miller said. “Coach (Robbie) Caldwell and Coach (Thomas) Austin really know what they're talking about when it comes to offensive line, and to me, it's just great being able to work with them and pick up the little tips and tricks that they do that maybe we don't do at our high school. And then, hopefully being able to use that to better my game.”

Miller said the Elite Retreat provided an opportunity to get past the pandemic and see everyone in person.

“I really enjoyed being able to finally be back with everyone, see everyone's face. It's just a different thing being able to see people in person than it is through FaceTime or through Zoom or whatever it is,” Miller said. “So it felt really personal and it felt really genuine, as it always does. That's one of the, if not the main reason, I picked Clemson, is because they really care about their players and they're very genuine and they take a very personal approach to recruiting and coaching.”

Miller said he got the chance to see quarterback commit Cade Klubnik.

Miller said that head coach Dabo Swinney had a special message for everyone.

“His message to everyone is Clemson is a special place, and he said, he gave us a little talk,” he said. “He goes, ‘This place sells itself. It's all about getting people down here.’ And he just wanted us to know that we were there because he saw and the coaches saw something special in us, and he wanted to bring us down there because he thought that we're great players but also special people.”

Several of the Tigers’ priority targets were also in town, and Miller said he doesn’t understand how they didn’t commit on the spot.

“They saw the same thing as us committed guys, and I mean, in my opinion, if you go through that and still don't understand why you should commit there, I don't really get what your thought process is,” he said. “I mean, after that, if I wasn't committed I'd be talking to Coach Swinney and saying, 'I want to come down there.'"