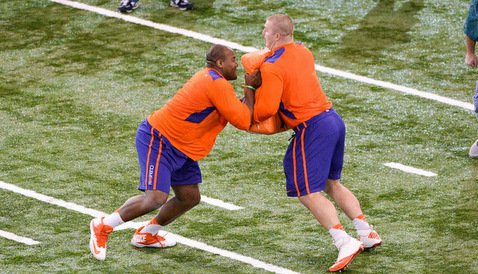 Thomas’ phone rang just as the 49ers were about to make the 95th pick of the 2014 NFL Draft, but no one was on the other end when the former Clemson offensive lineman answered. His heart sank, and he thought that another round might end without his being drafted.

However, Thomas would only have to wait five more picks – the 100th and final pick of the third round – to get a second call from San Francisco, and this one had someone on the other end.

When the call finally came, Thomas said that he was watching with friends and family and the entire room erupted.

“It was great,” Thomas told TigerNet Saturday morning. “I felt great. My mom was crying. My girlfriend was crying. Everybody in the room was screaming and yelling.”

On the other end of the much awaited phone call were several members of the 49ers staff, including former Clemson trainer and current 49er head trainer Jeff Ferguson.

“I talked to Coach [Jim] Harbaugh, the offensive line coach, and then I talked to the head trainer for a while,” Thomas said. “They were excited. I was excited. We were screaming back and forth. It was a good time.”

Thomas and Ferguson will be spending a lot of time together over the next several months as the Spartanburg native rehabs from a torn ACL suffered in a workout with the New Orleans Saints.

Overall, Thomas started 36 games at Clemson and played in 49. He was a first-team All-ACC tackle each of the last two years, the first Clemson offensive tackle to be a first-team selection twice since Barry Richardson

Thomas is the first Clemson offensive lineman taken within the first three rounds of the NFL draft since Joe Bostic was selected in the third round with the 64th pick by the St. Louis Cardinals in the 1979 draft. Thomas is the first Tiger drafted by the 49ers since Derrick Hamilton was a third round selection as a wide receiver in 2004.

If Thomas makes the 49ers roster he will be the fifth offensive lineman from the 2009 Clemson team to make an NFL roster. The others are Thomas Austin

Thomas said he is grateful for the opportunity to play for a team that seems likely to be a playoff contender for the next several years.

"I feel really confident about that," he said. "I feel good about it. They've got some great players and great guys out there that I can learn from. I can take this next year to just learn."

This wkend has been crazy; still doesn't feel real. Beyond blessed to be given this opportunity. God is good! #grindneverstops #49ersEmpire