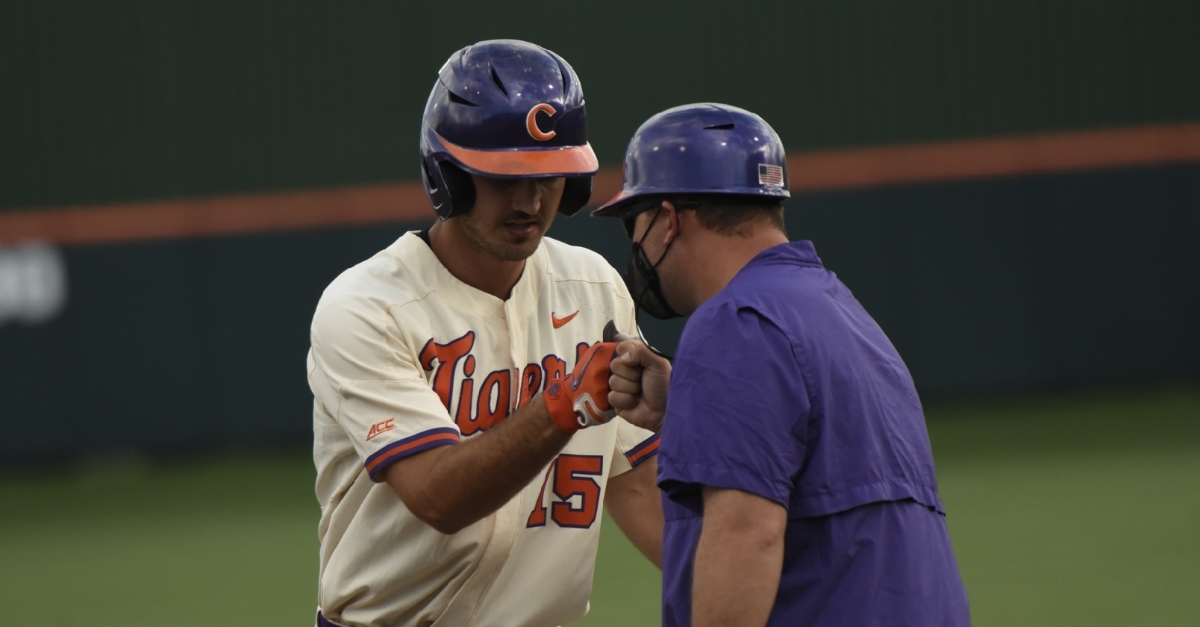 Parker put Clemson in the lead with a 2-RBI single in the second inning. (Clemson athletics photo)

Avenging a loss to USC Upstate earlier in the season, the Clemson baseball team extended its winning streak to seven on Wednesday night at Doug-Kingsmore Stadium, defeating the Spartans, 9-2. Clemson moves to 22-18 on the season and splits the season series with USC Upstate after the Spartans took the first game of the season, 12-2 in March.

Kier Meredith led the Clemson offense on the night, batting 2-for-3 with four RBI, a double and a home run as well as two runs scored. The home run was the third of the season for Meredith and gave the Tigers some insurance runs in the eighth inning. The shortstop, James Parker, was 2-for-4 on the night with two RBI and Kier Meredith was 1-for-2 with a double, RBI and a run scored.

The Spartans got to Sharpe early, plating a run on two hits in the first inning to take the lead before the Clemson bats even saw the plate. The right-hander on the mound got out of the jam before more harm could be done, forcing a groundout to first base with runners on second and third.

The Tigers tried to answer in the home half of the first, loading the bases after a hit-by-pitch and two singles. The Spartans pitcher slammed the door shut on the rally, forcing a flyout to left field to end the inning and keep the lead, 1-0.

USC Upstate doubled their lead the following inning, singling through the left side of the infield with runners on the corners to increase its lead, 2-0. 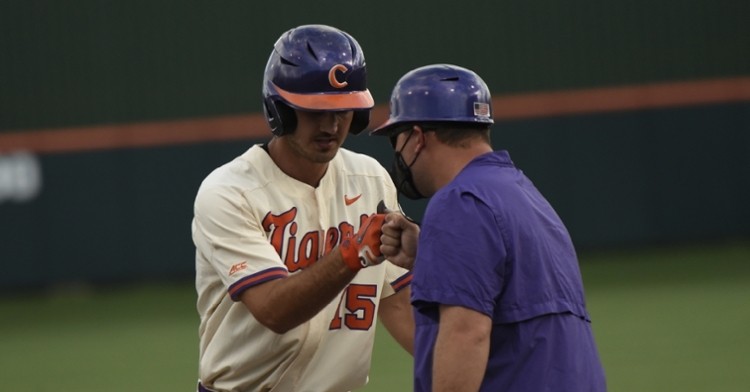 Parker put Clemson in the lead with a 2-RBI single in the second inning. (Clemson athletics photo)"

Clemson took the lead in the bottom of the second, scoring three runs on two hits and two walks. The rally began with the leadoff hitter, Sam Hall, reaching base via a walk and the next batter, Meredith, smacked his sixth double of the season to center field to score a run. Parker gave the Tigers the lead the next at-bat, singling to left field to drive in two runs, his 28th and 29th RBIs of the season.

Clemson doubled up its lead in the fourth, using a walk, a sac bunt and a stolen base to plate a run on a passed ball as Hall came around to score his second run of the game and open up the lead, 4-2.

The Spartans threatened to score in the seventh, putting runners on first and second with just one out. After entering for Ricky Williams on the mound, Geoffrey Gilbert forced the USC Upstate batter into a groundout and the Clemson infield turned the double play to end the inning.

After putting runners on first and second in the top of the eighth again, Clemsons’ Nick Hoffman entered the game and struck out the side to get the Tigers out of the jam.

Meredith launched his third homer of the season in the home half of the inning, extending the Clemson lead, 7-2. Max Wagner then doubled in two more runs to close out the scoring.

Three-run homer, a no-doubter to the batting cages! @KierMeredith extends the Clemson lead! ????

USC Upstate gets two on with no outs, but @gegilbert19 notches a big strikeout & then the Tigers turn two! ????

Two-out rally time!! ?? ??@james_parker15 puts the Tigers in front with this two-run single!

?? @KierMeredith puts us on the scoreboard with this clutch two-out double!

Clemson-Upstate box
Get the latest Clemson gear right here!
Comment on this story