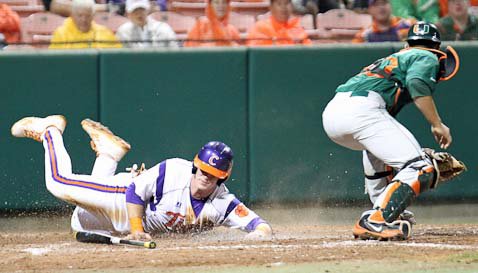 This past weekend was a successful one for the Clemson baseball team because the Tigers took two out of three from Georgia Tech. But not all news was good for the Tigers.

First let's look back at the Tech series. The Tigers pounded the Yellow Jackets in the first of three games in 24 hours. The offense was alive and the Tigers sent Georgia Tech an early message.

The nightcap was a strange affair when Clemson hit the ball hard but right at Tech defenders for five innings. Late runs were a key to a come from behind win in extra innings in game two of the day.

The third game was another strange one. Mother nature forced an 11:30 AM first pitch and Clemson answered the alarm clock with five early runs. However, Tech had a 10 run inning and took the third and final game. Tech beat the rain and the Tigers in the finale.

Unfortunately, State and North Carolina were rained out Sunday night and the game will not be made up. So instead of the Wolfpack losing two of three, the Pack and UNC split a two game series. This half game could be huge in the final standings.

So Clemson was not able to take full advantage of a difficult weekend series with a team that was ahead of the Tigers going into the weekend.

Florida State did as they were expected to and swept Wake Forest this weekend. The sweep gives FSU a one-half game lead over NC State and a one game lead over Clemson in the Atlantic Division.

Florida State will end its season with series against both NC State and Clemson in the final two weeks of the regular season.

The other bad news from the weekend came in the form of the RPI.

Conventional wisdom would say if the Tigers were ranked 13th in the RPI and took two out of three from the 22nd ranked team, then they would move up. But this week Clemson dropped three spots.

There were a couple of series from this past weekend that played a big part in Clemson having a bad weekend in the RPI.

First was the in-state rivalry between Virginia and Virginia Tech. The Cavs came into the weekend ranked in the top four in all major polls including the RPI. The Hokies took two out of three in the series and jumped Clemson in the RPI.

Virginia Tech is only 27-18 overall and 11-13 in the ACC but they are loved by the computer because the Hokies have taken two out of three from Florida State and Virginia. In fact, they have the nation's second toughest schedule according to the RPI.

In my opinion though, Virginia Tech is not a threat to take a hosting spot in the NCAA regionals at this point. So even though they are ahead of Clemson in the RPI, they will not host.

The other series that hurt Clemson took place when second-ranked LSU dropped two out of three to South Carolina. In winning the series at Baton Rouge, the Gamecocks jumped Clemson and is now eighth in the RPI. South Carolina is a threat to host and now is a candidate for a national top eight seed.

What we saw this past weekend is that the RPI can change pretty drastically in a few games. Clemson does not play a team that will help its strength of schedule or RPI until the season finale at Florida State.

So Clemson needs to take care of business in the final 12 games of the year. Recently I have written about the race to 40 wins. The Tigers currently have 30 wins, so they need to go 10-2 down the stretch to get to the magic 40 number. That goal is obtainable with three games with Maryland, two with Furman, three with Georgia Southern and one with USC-Upstate before traveling to Tallahassee for three.