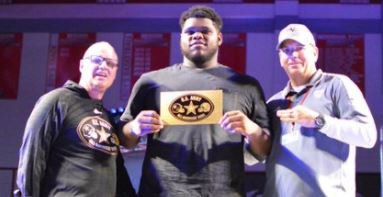 Belk on a visit to Death Valley

Clemson 2018 defensive tackle commit Josh Belk has accepted his invite to play in the 2018 Army All-American game on Saturday, January 6 at 12:00 PM on NBC in San Antonio, Texas.

Clemson offered in June of 2015 while Belk was attending the 2015 Dabo Swinney Football camp. Belk eventually received offers from Auburn, Florida, Florida St. Louisville, Miami, LSU, NC State, UNC, Ohio St., South Carolina, and others. The Gamecocks were the first to offer him.

ESPN lists Belk as No. 88 overall in the ESPN300 rankings.

Congrats to Josh Belk on his invite to the 2018 @armyallamerican Bowl ???? pic.twitter.com/EuxffDW0e3