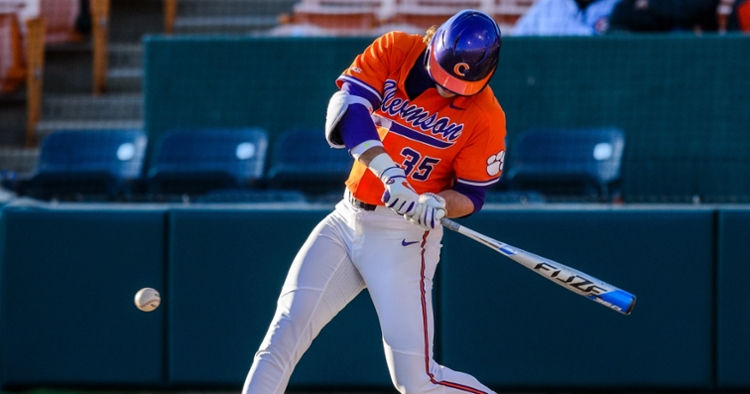 Chad Fairey was the hero in extras.

CLEMSON, S.C. - Chad Fairey's two-out single in the 11th inning scored Elijah Henderson in No. 19 Clemson's 3-2 walkoff win over Winthrop at Doug Kingsmore on Wednesday night. The Tigers, who upped their winning streak to five, improved to 14-3, while the Eagles fell to 11-4.

In the ninth inning, Bryar Hawkins hit a one-out single and pinch-runner Sam Hall advanced to second base on a wild pitch. Davis Sharpe reached on an infield single and Hall scored on the play on the errant throw to first base. In the 11th inning, Henderson lined a one-out double and advanced to third base on Kier Meredith's single. After an intentional walk and a strikeout, Fairey ripped a line drive over Cale Gibson's head in right field to score Henderson for the winning run.

Nick Hoffman (2-1) retired all three batters he faced to earn the win, while Garrett Gainey (1-1) suffered the loss.

The Tigers begin a seven-game road trip with a three-game series at Wake Forest this weekend, beginning Friday at 6 p.m. on ACCNX.

Clemson-Winthrop box
ONE DAY ONLY! Fanatics.com Black Friday Sale 20% off on orders over $75
Comment on this story