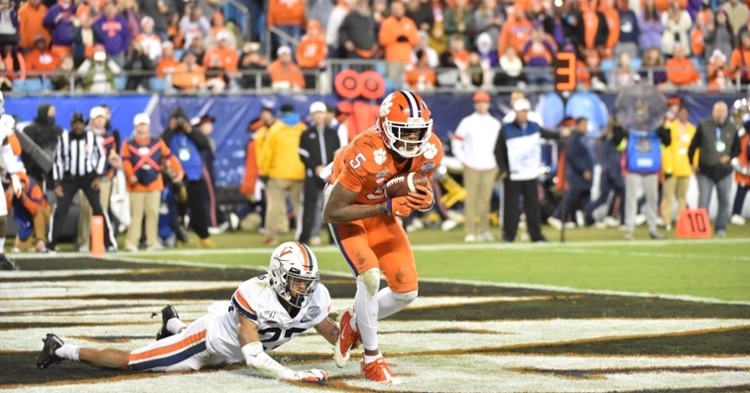 Clemson’s 62 points were its most all-time in postseason play, surpassing a 49-point performance against Louisiana Tech in the 2001 Humanitarian Bowl.

Clemson extended its active streak of wins by 30 or more points to eight to break the longest streak in the AP Poll era (since 1936). Per ESPN Stats & Info, Clemson had previously been tied with 2011 Houston and 1976 Michigan at seven each.

Clemson recorded 619 yards, including 211 rushing yards and a season-high 408 passing yards. The team reached 600 yards of offense for a fifth time to add to its current single-season school record for 600-yard games.

Clemson has now exceeded 200 passing yards and 200 rushing yards 10 times this season, including seven of its last eight contests. Clemson improved to 51-0 when both passing and rushing for 200+ yards under Dabo Swinney.

Clemson reached 500 yards in an eighth straight game for the first time since an 11-game streak to end the 2015 season.

Clemson outgained Virginia in passing yards, 408-283, and has now produced more passing yards than its opponent in a 16th consecutive game, dating to last season, for the first time since an 18-game streak across the 2015-17 seasons.

Clemson has now held 16 consecutive opponents to 20 or fewer points for the first time since a 31-game streak across the 1937-40 seasons under Hall of Fame coaches Jess Neely and Frank Howard.

Clemson won the turnover margin for a 10th time this season, surpasses the 2013 squad (nine) for Clemson's most such games in a season under Head Coach Dabo Swinney.

Clemson did not turn the ball over and has produced zero giveaways now in five out of its last six games.

Clemson has now scored in 33 consecutive quarters. Clemson was last held without a point in a quarter in the third quarter of its Sept. 28 game at North Carolina. The previous long under Head Coach Dabo Swinney had been 24 straight quarters in games 4-10 of the 2015 season.

Clemson has now thrown three or more touchdowns in eight straight games for the first time in school history.

Clemson rushed for multiple touchdowns in a 14th consecutive game for the first time since a 15-game streak across the 2016-17 seasons.

Clemson averaged 9.2 yards per play and reached 6.0 yards per play for an eighth game in a row, the program's longest since a nine-game streak in 2015.

With 387 yards, Virginia became the first team this season to reach 300 yards of offense on Clemson, snapping Clemson’s streak of 12 consecutive games without allowing 300 yards, the longest streak to open a season in ESPN Stats & Info searchable data going back to 1996.

Quarterback Trevor Lawrence completed 16-of-22 passes for 302 yards and a career-high-tying four touchdown passes with no interceptions.

Lawrence has now thrown 169 consecutive pass attempts without an interception, dating to the first quarter at Louisville on Oct. 19. He tied his own single-season school record of 169 set last season and now sits 18 attempts shy of Tajh Boyd's multi-season record of 187 from 2012-13.

Lawrence (34) broke his single-season career high in touchdown passes, surpassing his mark of 30 set as a freshman last year.

Lawrence (34) tied Tajh Boyd (34 in 2013) for fourth-most touchdown passes in a single season in Clemson history.

Lawrence has now thrown a touchdown pass in 23 consecutive games. His 23-game streak is the longest active streak in the country. (Note: UCF's McKenzie Milton had a 24-game streak prior to suffering an injury in November 2018 that will likely preclude him from playing in 2019).

Lawrence has now thrown three touchdown passes in eight consecutive games for the first time in his career, the first in Clemson history to accomplish the feat.

Lawrence (3,172) became the third quarterback in Clemson history to post multiple 3,000-yard passing seasons, joining Tajh Boyd (three from 2011-13) and Deshaun Watson (two from 2015-16). Lawrence is the first to accomplish the feat across his freshman and sophomore seasons. The 3,000-yard season by Lawrence is the 10th by any player in school history.

During the contest, Lawrence (7,036) passed Nealon Greene (6,786) for fifth on the school's leaderboard for career total offense. Lawrence is now only the fifth player in school history to combine for 7,000 career yards of total offense.

Lawrence’s three first-half touchdowns tied the single game ACC Championship game record for passing touchdowns, which had been accomplished seven times previously, including twice by Deshaun Watson (2015, 2016) and once by Tajh Boyd (2011). Lawrence later set the record when he hit Tee Higgins with an 11-yard strike in the third quarter.

Higgins’ 182 receiving yards were a career high, surpassing his 178 yards against The Citadel as a freshman in 2018. He tied Rod Gardner’s performance against North Carolina in 2000 for the seventh-most receiving yards in a game in school history.

Clemson opened the scoring on a 19-yard touchdown pass from Lawrence to Higgins. With that score and the victory, Clemson improved to 50-0 when scoring first since 2015.

Higgins added his second score on a seven-yard touchdown pass from Lawrence in the second quarter.

Higgins scored his school-record-tying third touchdown reception on an 11-yard pass from Lawrence in the third quarter.

Higgins has now caught a touchdown in five straight games to tie his career long set across the final four games of the 2018 season and the 2019 season opener. It ties that streak as well as five-game streaks by Deon Cain (2015), Aaron Kelly (2007) and Derrick Hamilton (2003) for the second-longest streak in school history.

With his third touchdown, his 13th of the season, Higgins set a new career high in single-season touchdown receptions and passed himself (12 in 2018) and Sammy Watkins (12 in both 2011 and 2013) for the second-most in a season in Clemson history.

During the game, Higgins (1,082) broke his single-season career high in receiving yards, set as a sophomore last season (936).

Higgins has now recorded back-to-back 100-yard receiving games for the first time in his career.

The 59-yard reception was Ross’ longest of the season, surpassing a 48-yard reception at Syracuse. It represented the second-longest scoring pass in ACC Championship Game history.

Running back Travis Etienne rushed 14 times for 114 yards with a rushing touchdown.

Etienne scored Clemson’s third touchdown of the game on a 26-yard touchdown run in the second quarter, adding to his career ACC records in rushing touchdowns and total touchdowns.

Etienne has now rushed for a touchdown in seven straight games to tie his career-long streak set across the first seven games of the 2018 season. It tied that streak and Kenny Flowers' seven-game streak in 1985 for the fifth-longest in school history.

Running back Lyn-J Dixon scored his single-season career high sixth rushing touchdown of the season on a 23-yard scoring run in the third quarter.

Quarterback Chase Brice scored his first career rushing touchdown on a four-yard run in the fourth quarter. Brice was the 19th different player to score a touchdown for Clemson this season; last year, Clemson set a school record with 22 different players scoring touchdowns in 2018.

Running back Chez Mellusi scored his third touchdown of the season on a four-yard run in the fourth quarter.

Clemson scored on each of its first five drives prior to its final drive of the first half, when Clemson received the ball with only 16 seconds remaining in the second quarter. Clemson’s 31 points in the first half set an ACC Championship Game record for points scored in a first half, breaking the previous mark of 28 first set by Florida State versus Georgia Tech in 2014 and matched by the Tigers versus Pitt last year.

Clemson scored on its first five drives of a game for the third time this season, joining such performances against Charlotte and Boston College.

Turner’s pick gave Clemson a takeaway in an eighth consecutive game and for the 16th time in 17 games, dating to 2018.

Safety K’Von Wallace, a native of Richmond, Va., recorded nine tackles and two pass breakups. His nine tackles were one shy of his career high of 10, set earlier this season against Texas A&M.

Defensive tackle Tyler Davis recorded his fourth sack of his freshman season in the second quarter. He added another half sack in the third quarter, splitting a sack with linebacker Chad Smith.

Linebacker Isaiah Simmons recorded his second interception of the season —the third of his career — in the fourth quarter.

Linebacker Keith Maguire recorded Clemson’s third interception of the game in the fourth quarter. It was Maguire’s first career pick.

Safeties K'Von Wallace and Tanner Muse each appeared in their 57th career game to tie fullback Chad Diehl (57 from 2007-11) for fifth-most career games in school history.

Clemson secured its 19th all-time ACC championship. Clemson's 19 ACC titles are the most in conference history, ahead of the 15 earned by Florida State.

Prior to Saturday, the 1971-75 Alabama Crimson Tide has been the most recent member of any current FBS conference to win five straight outright conference titles. Clemson and Oklahoma both accomplished the feat with wins on Saturday.

Clemson improved to 13-0 for only the third time in school history, joining the 2015 and 2018 squads that both went on to play for national championships.

The 2019 Clemson seniors won their 54th game to pass the 2017 Alabama seniors for sole possession of the third-most in FBS history in a four-year span. Clemson matched the 2018 Alabama seniors as the fastest to 54 wins (57 games).

Clemson improved to 39-8-1 against Virginia all-time.

Clemson improved to 28-8 against ACC Coastal Division opponents, including postseason play, under Head Coach Dabo Swinney. Clemson has now won 14 of its last 15 games against the Coastal Division since 2015.

Clemson pushed its streak of consecutive victories in ACC interdivisional matchups to 10 games, dating back to the 2016 ACC Championship Game.

Clemson defeated its 22nd consecutive ACC opponent, including postseason play, dating to October 2017 against Georgia Tech. The 22nd consecutive victory against a conference opponent (including postseason play) is the longest such streak in school history. That streak includes 19 straight in regular season play, one shy of the school-record 20-game ACC regular season streak posted by the 1981-84 Tigers.

Clemson earned its 21st victory in its last 23 games against top-25 teams since the start of the 2015 season.

Clemson won its fourth consecutive neutral site contest to push Clemson to 8-1 at neutral sites since 2016.

Clemson earned its 38th victory in its last 41 games away from home.

Clemson has now won 78 of its last 80 games when leading at halftime.

Clemson is now 99-2 since 2011 when leading after three quarters.

Clemson now has a 99-2 record when totaling more first downs than its opponent since 2011.

Clemson has now won 81 straight games when holding teams under 23 points (dates to 2010).

Clemson now has a 57-3 record when winning the turnover margin since 2011.

Clemson is now 65-1 when rushing for 200+ yards under Dabo Swinney.