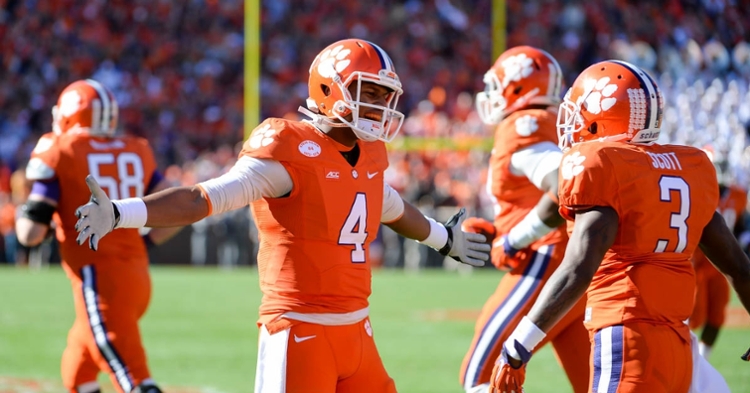 Former Clemson quarterback Deshaun Watson was recently on a podcast with The Ringer to talk about his career and his role in the national conversation about race in America.

Watson was asked about how he felt about not winning the Heisman Trophy after finishing with Clemson bests in third place as a sophomore and then second as a junior.

"I should have won it back-to-back," Watson said. "Lamar (Jackson) had a hell of a year (in 2016). In November, he lost a couple games. He’s my dog though. He deserved it. The year before, I was the first player ever in FBS history to pass for over 4,000 yards and rush for a 1,000 yards. Ever. Never been done. Johnny Manziel, Cam Newton -- you go all the way back. And I came in third...It is what it is and we just kinda go from there.”

Watson won the Davey O'Brien and Manning Awards in both seasons as the nation's top QB. He also won the Archie Griffin award as a sophomore for the nation's most valuable player. He finished third with 667 fewer vote points than winner Derrick Henry of Alabama, who rushed for 2,219 yards and 28 touchdowns that year. Watson accounted for 5,209 all-purpose yards and 47 scores. Stanford's Christian McCaffrey finished second.

Watson earned more first-place votes as a junior (269) but Lamar Jackson topped 500 (526) and easily topped the ballot. Jackson passed for 3,660 yards with 27 TDs to 10 INTs and rushed for 1,601 yards and 18 more scores. Watson set Clemson records with 4,593 passing yards and 41 TDs, also rushing for nine scores and 629 yards. Before the Heisman vote, Clemson won the ACC title in a 12-1 campaign to make the College Football Playoff, while Jackson and Louisville stumbled to the regular-season finish with two-straight losses (and a 9-3 record).

Watson also recalled the end of his freshman campaign as a Tiger on the podcast as well -- beating South Carolina on one good knee.

"(After the injury) I go, ‘I can’t play against South Carolina.’ And I promised coach Swinney that as long as I’m here that I’m not losing to the Gamecocks. Ever," Watson said. "Man, I’ve got to be out there. I’ve got the energy to rally together the team. I told coach Swinney and the doctors and we had a meeting and (they said) if you can go out there and make plays and we’ll brace you up and you can protect yourself -- you can play."

Watson passed for 269 yards and two touchdowns and rushed for two more in the 35-17 win to break South Carolina's series winning streak. Clemson coach Dabo Swinney revealed in the postgame that Watson did so on a torn ACL.

"The whole week I went with the 2s and they would watch me and I was running the ball," Watson said. "Juking. Spinning. Everything and they were like that Saturday that you can start. We’re not going to say anything right up to it. It was cool.”