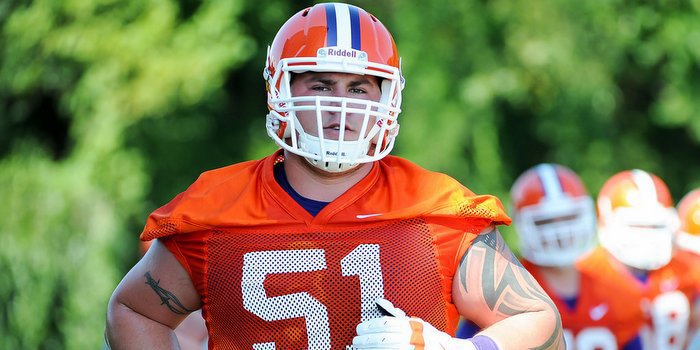 Taylor Hearn should get the chance to take at left guard

At the skill positions – quarterback, running back, wide receiver and tight end – Clemson is set for 2016 as the Tigers bring back all but one starter. However, there will be a couple of openings in the Beard Gang.

Clemson’s offensive line was one of the best in the ACC last season, protecting Deshaun Watson and opening holes for Wayne Gallman, but last year’s line loses the unquestioned leader in left guard Eric Mac Lain as well as right tackle Joe Gore.

Who will take over at left guard and right tackle? Who will man the second team offensive line? Danny Pearman and Robbie Caldwell hope to answer those questions during spring practice.

At right tackle, sophomore Jake Fruhmorgen is poised to take over after having a solid freshman campaign despite recovering from shoulder surgery that occurred just over a year ago. Fruhmorgen logged 245 snaps over the course of the season, including a start against Wake Forest – the only time in Clemson history that the Tigers have started two true freshmen offensive tackles.

In those 245 snaps, Fruhmorgen, had six knockdowns and graded out over 80-percent against Georgia Tech (35 snaps), Miami (46 snaps) and Syracuse (15 snaps).

Fruhmorgen has the bloodlines to be an excellent offensive tackle as his father, John, was a lineman at Alabama and for the Miami Dolphins, and a second offseason in the weight room will do him a lot of good.

At left guard, we will probably see some combination of Taylor Hearn, Maverick Morris, and Justin Falcinelli during the spring.

Hearn, the Williston (SC) native, will be a redshirt sophomore. He played 167 snaps in 12 games, including two games where he graded out at over 90-percent. Hearn had seven knockdowns in 2015, including two-and-a-half against Georgia Tech.

Hearn has all the tools to be physically dominant – he’s nasty and there is no quit when he’s on the field. We’ve heard excellent reviews on Hearn from inside the program over the last several months, but everyone also agrees he has to completely buy in to the coaching. If he does, the left side of Clemson’s line will be scary.

Morris spent time at both guard at tackle last season, primarily at right guard. In 17 career games, Morris has logged 485 snaps and 19 knockdowns. In 2015, Morris started three games – Syracuse, Wake Forest and South Carolina – in place of an injured Tyrone Crowder. We feel that Morris is better suited inside, however, and will get looks at both guard spots.

Falcinelli spent time backing up Guillermo at center as well as guard. He logged 119 snaps over 11 games with three knockdowns. The coaching staff liked the Maryland native at center, but with Zach Giella coming off of a redshirt year, they may want Falcinelli to focus more on guard.

Two members of the 2016 recruiting class will be on hand during the spring as well – Sean Pollard (who projects as a tackle) and Tremayne Anchrum (we see him inside). Both players should be able to redshirt considering the depth, but the spring will accelerate their learning curve.

If the season were to start today, it would likely be Hyatt at left tackle, Hearn at left guard, Guillermo at center, Crowder at right guard and Fruhmorgen at right tackle. That has the makings of another solid group, but we should know more about how the positions will shake out after the spring.