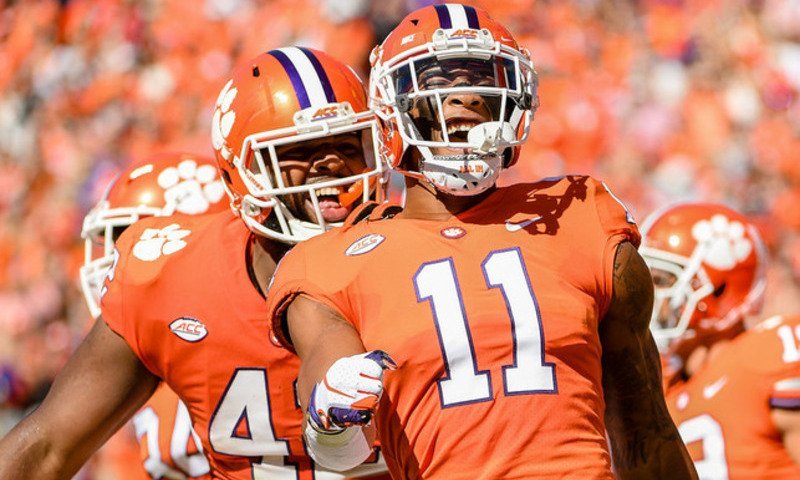 Clemson's having a lot of fun on the field at this point.

Each week builds on the next for Clemson football and another dominant effort overpowered Louisville early and often to a record-breaking 77-16 win.

This season the ‘Second Look’ features the TigerNet staff grading Clemson as a group and offering some different perspectives on the action each week. Here’s our look at game nine as the Tigers continued their march to Charlotte and beyond.

A Clemson offensive huddle pregame Saturday called for the Tigers to “dominate every snap.” Mission accomplished.

Clemson imposed its will from the jump with its front-line overpowering Louisville defenders play after play and the talented running back corps doing the rest for yards on demand, tallying a second game this season with three 100-yard rushers.

While the passing game wasn’t necessarily counted on, it was efficient once again with Trevor Lawrence throwing for two scores - accounting for two of Clemson’s 7-for-7 day on touchdowns in red zone appearances.

Oh, and Dexter Lawrence matched his defensive tackle teammate Christian Wilkins with a rushing touchdown. Also, Mitch Hyatt got a touch on a lateral, screen-like play that was stopped short of its goal to get the new Clemson all-time snaps leader a TD.

Just an indication of where this team is now with elite execution, it’s remarkable how boring scoring touchdowns have become that creating ways for defensive and offensive linemen to score is a thing this season. Don’t get me wrong - I’m all for it, but that’s where we are at this point. This group is scary good and keeping things fun-but-on-edge will be needed as there won’t be much for defensive tests going into postseason play. -- Brandon Rink

Through three quarters of Saturday’s win over Louisville, Clemson running back Travis Etienne had 153 yards rushing and Louisville had 152 yards as a TEAM, both running and passing. Almost half of those yards – 73 of them – came on one drive in the first quarter, a drive that saw Clemson head coach Dabo Swinney call a timeout and chew out his defense.

Louisville ran 70 plays in the game, 16 of them on that drive, and 13 of their drive were five plays or fewer. Clemson’s starting defense still hasn’t given up a touchdown through the first three quarters of a game in over a month, and the Cardinals averaged just 2.3 yards per rush.

Linebacker Kendall Joseph had 10 tackles and overall the Tigers had nine tackles for loss and six sacks. Since halftime of the Syracuse game, the starters are simply imposing their will on opposing offenses and allowing younger players and reserves to get plenty of playing time.

The Tigers currently sit third in total defense nationally, and one has to wonder how good the numbers would be if fourth-string defenders weren’t playing by the middle of the third quarter.

There were a few issues Saturday – especially on the Cards’ first scoring drive – but overall it was another dominant effort. -- David Hood

The grades for Clemson special teams are beginning to look the same each week – some bright spots and some not-so-bright spots.

We will start with the good – Will Spiers only punted once, but it covered 44 yards. Returner Derion Kendrick averaged 26 yards per kickoff returner and always looks like he is one cut away from breaking a long one. Kicker Greg Huegel looked good Saturday – he didn’t attempt a field goal but hit all seven of his extra point attempts. Kicker Alex Spence came in and hit all four of his extra points.

Now for the bad – BT Potter was short on several kickoffs and another from Steven Sawicki was returned for a 93-yard touchdown in which the returner looked like he was never touched. Against a better opponent, those plays can kill momentum and change a game.