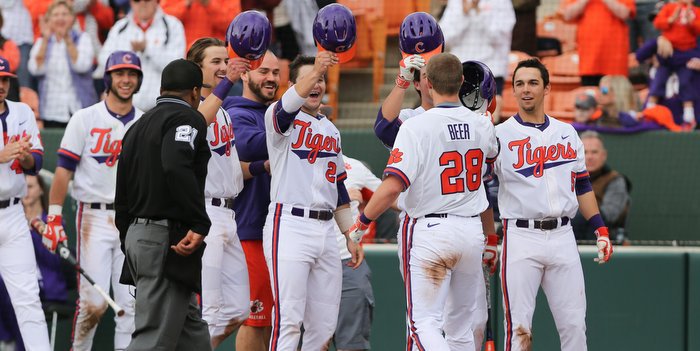 CLEMSON – Clemson pounded out 19 runs and 22 hits and scored multiple runs in five different innings in a Beer-fueled rout of Maine Sunday afternoon, winning the rubber match of the season-opening series 19-2 at Doug Kingsmore Stadium.

Freshman Seth Beer hit a grand slam – his first homer as a Tiger – in a 7-run fifth inning. Beer finished the afternoon with two hits, one of four players with two hits. Chris Williams and Weston Wilson each had three hits in the 22-hit attack, while Chase Pinder scored three times and drove in four.

The Tigers scored 27 runs in the last two games of the series after dropping the opener 4-3.

Starter Jake Higginbotham picked up the win, giving up six hits and two earned runs in his five innings of work. He struck out three and walked two, throwing 48 strikes in his 84 pitches. Five Clemson relievers combined to hold Maine off the scoreboard after Higginbotham’s exit.

"I don't know if we could've played any better than we played today. You look at how we pitched," head coach Monte Lee said. "It all starts on the mound, as we know. Jake Higginbotham in his first start got five innings and threw the ball very, very well. It was great to get so many guys into the ballgame after him. I thought Brooks Crawford - the true freshman - looked very poised, was very consistent, pounded the strike zone. (Alex) Bostic at the end there, it was good to get him some work. We expect very big things out of him. It was a lot of fun to see those two freshmen pitch. They're going to be our future and I thought Higginbotham did an excellent job of staying in the strike zone and forcing them to swing the bat. He made some big pitches and got five innings of work in today."

Higginbotham gave up a long solo home run to Tyler Schwanz with two outs in the first, and Clemson answered with two in the bottom of the frame. Chase Pinder and Eli White singled to start the inning and both runners moved up on a fielder’s choice grounder by Reed Rohlman. Chris Okey struck out for the second out, but Pinder scored on a wild pitch and White scored on a single to left by Chris Williams for a 2-1 Clemson lead. 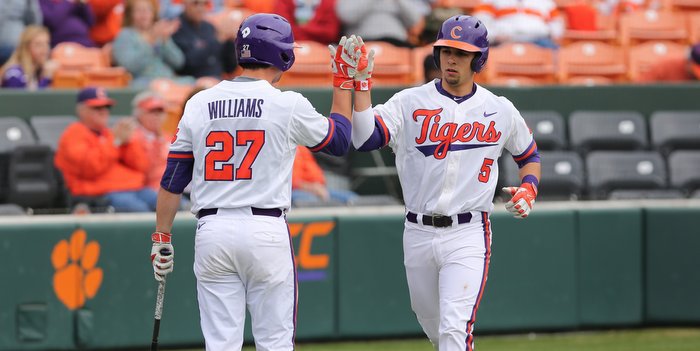 The Tigers piled on in the fourth. Weston Wilson was hit by a pitch to start the inning and took second on a passed ball. K.J Bryant walked, but Adam Renwick’s bunt attempt forced Wilson at third for the first out. That brought up Pinder, who deposited a 1-0 pitch into the bleachers in the Chapman Grandstand for his and Clemson’s first home run of the season.

Eli White followed with a ringing double and he scored on Okey’s RBI single for a 6-1 Clemson lead at the end of four innings.

The Tigers opened the bottom of the fifth with four consecutive singles to left, plating their seventh run. Pinder reached on a fielder’s choice that scored Renwick and a Rohlman groundout scored Bryant for a 9-1 lead.

With two runners on base, lefty reliever Connor Johnson worked around Okey, walking the catcher on five pitches. Up came Beer, who deposited 1-2 pitch into the right field seats for a grand slam, the first homer of his career and the second of the day for the Tigers. The line shot gave the Tigers a 13-2 lead through five innings. The seven hits in the inning matched the total number of hits in Saturday’s win and was three more than the four in Friday’s opener.

Beer said hitting his first homer - on 1-2 slider - was a good feeling.

"It was one of those things, it was a 1-2 count so I was just looking for something I could square up and hit up the middle and push some runs across," Beer said. "It ended up being something that I could put a good swing on. Thankfully, I hit it hard enough that it had a chance of going out. It was a pretty cool feeling."

Monte Lee began emptying his bench early, but the Tigers still scored two runs in the seventh and three in the eighth as multiple reserve players got in on the action.

"Offensively, I think we used pretty much every position player that we had. I think we had hits from 14 different guys today," Lee said. "I think the biggest thing I was impressed with with our position guys is how we kept playing. Even after a couple of big innings there in the middle and we started to break away from them, our guys stayed consistent with their approaches. We hit a lot of balls into the middle of the field. We hit a lot of balls well with two strikes the other way. We just kept playing. That was the biggest thing that I told our guys after the game that I was impressed with - just how consistent we were throughout the whole game, even in a game that we were running away with. Our guys kept competing and playing really quality baseball for nine innings."

Clemson returns to action next Friday, hosting James Madison in the first game of a three-game series.