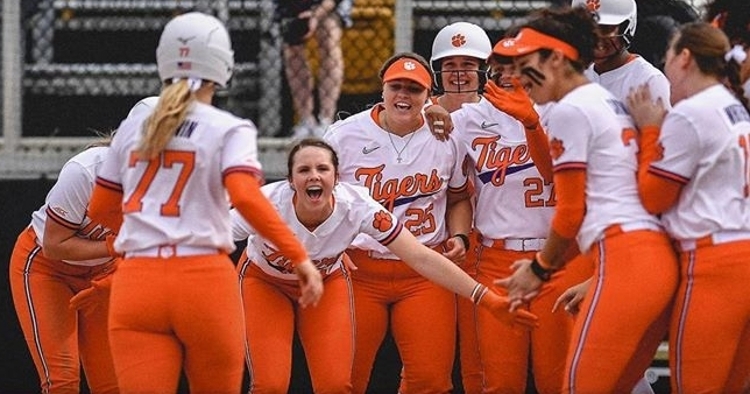 The Clemson softball team won the first game in program history with a 6-2 victory over St. John’s in the UCF Black & Gold Tournament in Orlando.

Logan Caymol pitched seven strong innings in picking up the complete-game win, giving up four hits, two runs (both earned), walking one and striking out eight in her collegiate debut. Cammy Pereira was 2-for-4 with a run scored and an RBI out of the leadoff spot, while freshman Hannah Goodwin crushed a three-run homer and drove in four runs.

“A lot of emotions obviously, setting history, and first game in 2020,” said Clemson Head Coach John Rittman after the game. “It's been a long time coming. As coaches, we've been here since late 2017. It's all coming to reality. Today was a great effort by our team. I felt that we had some great performances today, starting in the circle with Logan Caymol. The battery with she and JoJo Hyatt were terrific. We had some clutch hits - Hannah Goodwin breaking the game open with a big home run (and) Cammy Pereira providing a lot of spark offensively.”

St. John’s got on the board in the top of the first after a hit batter, two stolen bases, a walk and a steal of home for a 1-0 lead. Clemson got the run back in the bottom of the second after Bailey Taylor was hit by a pitch with two out. An error moved her to second and she scored on Pereira’s single through the left side.

“I thought as the game wore on, we settled down at the plate, got the adrenaline out of us and started having some good at-bats, and came away with a victory.”

Taylor and JoJo Hyatt walked to lead off the bottom of the sixth, and with two outs Bonamy walked to load the bases. Two more hit batters led to two more runs and Clemson led 6-1. St. John’s added a run in the top of the seventh for the final score.

The game was the first game of a doubleheader in the tournament. Clemson plays Duke at 12:30.

Clemson vs. St. John's boxscore
Comment on this story