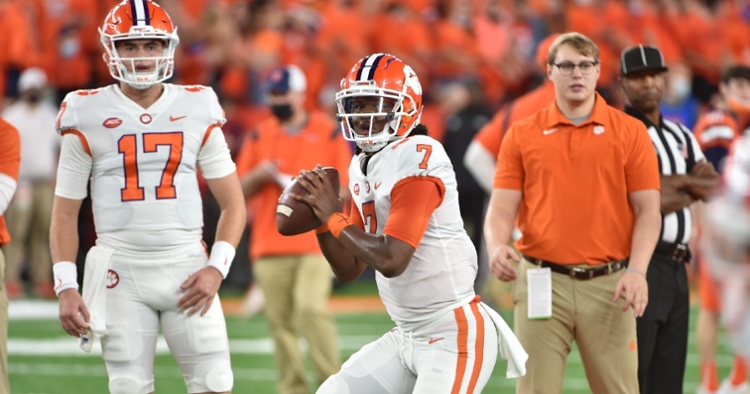 Phommachanh (7) throws a pass before the game at Syracuse.

CLEMSON – Clemson offensive coordinator joked with members of the media during Monday’s media availability, and at one point cracked a joke and said that sometimes you have to laugh to keep from crying. However, Elliott turned serious when it was time to discuss the offensive struggles and answered questions about the playbook, tempo, and the availability of backup quarterback Taisun Phommachanh.

Clemson managed just 314 total yards in the win over Syracuse last Friday, and Elliott said he was disappointed in the poor effort coming out of an open date.

“I thought the guys were ready to play and play their best game. You look at the week. Obviously, the open week was more focused on getting healthy and just focusing on Clemson,” Elliott told TigerNet. “And then we flipped the page to Syracuse and the Tuesday, Wednesday, Thursday practice, the way they handled the adversity, it was loud in here was deafening in here. They handled the communication well, we tried to show them every twist known to mankind and preparing for all the movements.

“So, I anticipated that they were going to come out and play a little bit better. And it's a challenging time for them right now. I think the guys probably are carrying too much pressure, putting too much pressure on themselves, especially on game day. And us as coaches, we just have to find a way to help them, just cut it loose. I think a lot of the guys are trying to play perfect because of just the state that they're in right now. They don't want to make a mistake, which forces them to make a mistake as opposed to playing free. So that's probably the only disappointing thing is they didn't cut it loose based off of what we saw leading into the game.”

Clemson’s traditionally tempo-led offense ran at a much slower pace Friday night, especially when checks were called from the box to the sideline to the field, and Elliott said they want to go faster and he thinks they can go faster, but conditions limited what they were able to do against the Orange.

“We can. But also I think part of it is when you have the noise, you had to communicate all the way down the line. So that kind of slows you down,” Elliott said. “That takes a little bit of time from that standpoint. So, I think once you get environments where you're not dealing with as many of the issues, you can play a little bit faster. But the biggest thing there is just make sure we have the proper communication up front and we know it's going to be loud and you're going to have to communicate all the way down the line to slow things down.

And then also to trying to take a little bit of pressure off of him (DJ Uiagalelei) by trying to get him in a better play call in certain situations.”

Several former players were tweeting Friday night that Elliott needed to open the playbook, saying that it was a scaled-down version of what’s been in the past, and we asked Elliott about that assertion.

“So then you have to go to the outside. So some of it was limited. And then we got them in some man situations. And we got some 1-on-1s. But just in response to those guys, it's the same playbook. But right now you can't throw everything on the table when you're trying to get and establish an identity and get these guys in a rhythm. We knew we were going to run the ball. We knew we wanted to run the ball. And I thought from an effectiveness standpoint we did run the ball. And then everyone talks about the rushing output. But there were a lot of RPOs. The first play of the game, that's a called run to RPO. If they're going to play that overhang defender tied to the box and have seven, we're going to throw the hitch and get nine yards. So that's kind of been the extension of the run game. It's the same playbook. And as the guys really get going and we get our depth back, then maybe we can open it up a little bit more. But the biggest thing is guys got to make plays. They complete those plays down the field, I think it's a different ballgame.”

Many fans have also asked why Phommachanh hasn’t received more of a look, and Elliott said the coaches don’t want to disrupt Uiagalelei’s rhythm.

“DJ has done what we've asked him to do. He's played better each week. So I think he's improving. And we wanted to get - you saw in the first drive we wanted to get Taisun in there. - we want to have a little bit of a package for him,” he said. “But then as the game goes on, you just get into you get into that dog fight. And so DJ is doing well. He's playing well, don't want to disrupt what he has going on. But obviously, for us, Taisun is a guy that we believe can help us in certain situations, and his role will expand as we go forward.”