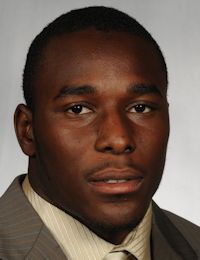 Before Clemson: Rated as the #10 prospect in South Carolina and #24 outside linebacker in the nation by Rivals.com ... #34 weakside linebacker in the nation by Scout.com ... #22 outside linebacker in the nation by ESPN.com ... #19 prospect in South Carolina by SuperPrep ... only played half of his senior season due to a knee injury ... all-region selection as a senior ... played in the North-South game ... selected to play in the Max Emfinger All-American Bowl ... rushed for 702 yards in six games during his senior season ... totaled 89 tackles and 53 assists during his senior season ... four-time state wrestling champion ... All-American, all-state, and North/South participant in wrestling ... ran the 100m and threw the shotput in track; he finished sixth in the state in the shotput ... coached by James Longerbeam ... recruited by Dabo Swinney ... chose Clemson over Florida, Maryland, Michigan, North Carolina, N.C. State, South Carolina, and Tennessee.