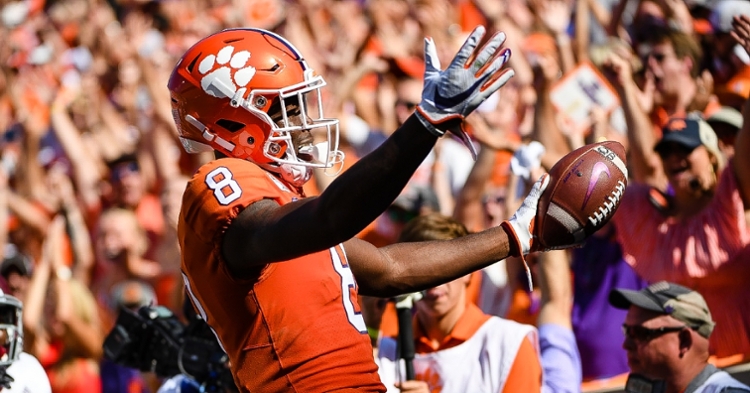 Ross was an impact player in Clemson's 2018 title run and played a supporting role through injuries in 2019.

Travis Etienne was already going to be focal point in 2020, but Justyn Ross' season-ending surgery make Etienne's impact that much more important.

That's because Etienne is not only Clemson's leading returning rusher (both for the season and all-time), but he is also the Tigers' top returning receiver by the numbers. He took leaps forward in the passing game last year with 37 catches for 432 yards and four scores, including two in the Fiesta Bowl.

"He is going to have to be the guy to get those ugly yards," CBS analyst Barrett Sallee said. "We know about his home-run ability...But now he's going to do the dirty work and in addition to that he is their leading returning receiver. I think now that Justyn Ross is gone and we knew Tee Higgins was already out then Travis Etienne is going to have to be more involved in the passing game -- even more so than he has in the past...If he does succeed, and that is more of a challenge -- if he does succeed, I think the road to the Heisman became actually easier because a lot of eyeballs are going to be on him. Not just from opposing defensive coordinators but a lot of Heisman voters."

Sallee says the transition in Clemson's offense will play a factor overall.

"It really impacts Clemson's offense because it's a bunch of more pressure on Trevor Lawrence," Sallee said. "Not that he can't handle it. Justyn Ross is supposed to be his outside threat. He's supposed to take the top off of a defense. And yeah, they have Amari Rodgers coming back, but here's the thing, Amari Rodgers doesn't really play the same position. He's more of a slot guy. Now you're looking at a couple of untested young guys, while they are heavily recruited -- Joe Ngata and Frank Ladson simply do not have that kind of experience...Not to say they can't handle it.

"Not to say they can't become stars, but now you're looking at Trevor Lawrence trying to figure things out on the fly without (a full) spring practice and you're looking at a coaching staff that lost its co-OC Jeff Scott USF. Now it's on Tony Elliott. Not to say he can't handle it either but there has been a little bit of a shake-up. And, by Clemson standards, is actually a big deal. It changes what Clemson's offense will look like. And with this offseason being a little wonky, that will play a factor. And Dabo Swinney will have to figure that out whenever fall practice starts."

"(Clemson is a national title contender if) the offensive line is at least solid," Connelly said of the unit replacing four starters. "Clemson has made five straight CFPs, winning two national titles and, with the ACC playing at a mediocre-average level for three straight years, continues to boast the easiest playoff road of any major contender. That, plus big-time star power (quarterback Trevor Lawrence, running back Travis Etienne), veteran role players and a glorious incoming recruiting class, make Dabo Swinney's program a title favorite even without injured star receiver Justyn Ross, who's out for the season, if not longer."

"But the good news for Dabo is they have recruited at such a ridiculous level that it is 'next man up' down there in Clemson," he said.

The Justyn Ross news is awful. But Clemson is at least well positioned to deal with it. Here are a few of his backups on the outside and their recruiting rank: