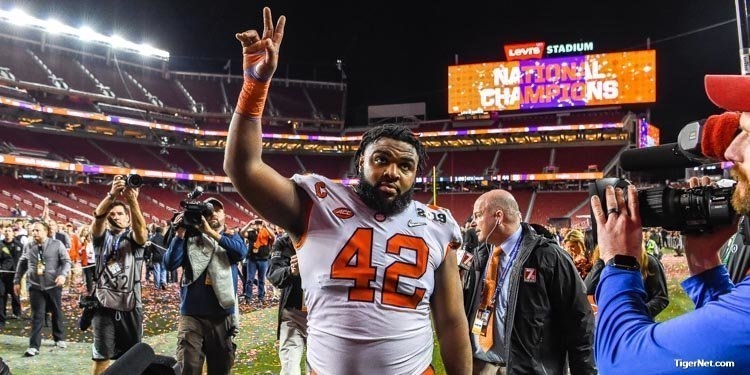 Wilkins didn't miss a tackle all season according to Pro Football Focus.

Pro Football Focus released its top-101 player grades for college football this season and the first 15-0 team in the modern game lined the list with the most honored.

Wilkins was ranked the No. 2 defensive interior lineman overall with the third-highest pass-rush grade and run-defense grade, posting 46 QB pressures in all with no missed tackles.

Lawrence's finish to the season propelled him into the top-5.

"For the season, Lawrence finished the season on a tear and vaulted into the top 10 in terms of overall grade after the dismantling of Alabama," PFf's Cam Mellor said. "He put forth game grades over 70.0 in all but four contests and finished the season with above-average grades in his final five outings including two elite games against South Carolina and Notre Dame. If the performance he had against the Crimson Tide is an indicator, be prepared to hear his name a lot more this coming fall, and the next fall, and the next."

Dexter Lawrence joined Wilkins in the top-35 with a 89.8 grade.

“With his decision now official to forgo his final year at Clemson, Lawrence capped his career 33 QB pressures on just 254 pass-rushes giving him 99 total pressures over his three-year stint,” Mellor noted. “His 89.8 overall grade that he finishes with gives him three years of elite grading at the college level as he also displayed strong tackling efficiency since his freshman year – missing just a single tackle since 2017 over the course of 59 total tackle attempts.”

Etienne led the nation in touchdown rushes but PFF analyzed that he also forced 52 missed tackles and totaled over half of his yards after contact (884).

Ross earned the second-best grade of any receiver in the nation (91.1).

Ferrell ranked third in the ACC in QB pressures and only posted four missed tackles all season, per PFF.

Working at a new position as a first-year starter, Isaiah Simmons made the list with only 1.11 yards allowed to a receiver per targets in coverage in the slot.