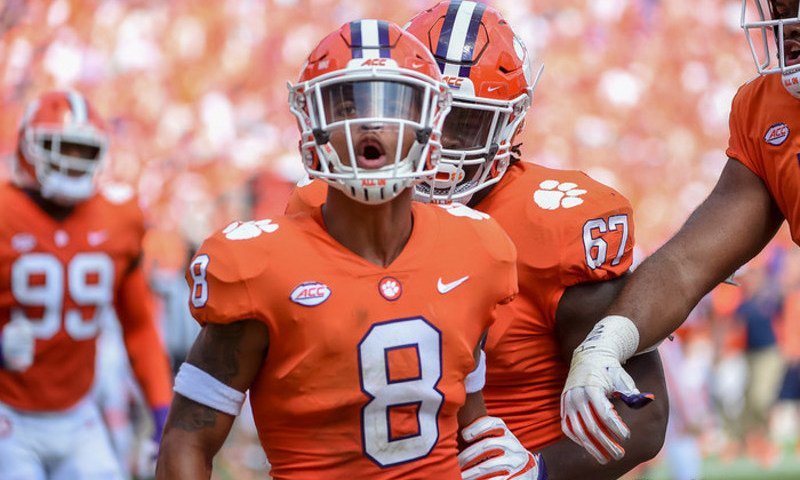 Amari Rodgers came close to a highlight-reel TD Saturday but had a tough day overall.

Clemson’s nightmare scenario unfolded with injuries at key positions on offense and defense as a scrappy Syracuse Orange football team jumped out to two-score leads twice in Death Valley Saturday.

Led by a defense put in some tough situations all game, Dabo Swinney's Tigers hung around with a strong running game and some clutch completions to edge the Orange in a 27-23 comeback win.

This season the ‘Second Look’ features the TigerNet staff grading the Tigers as a group and offering some different perspectives on the action each week. Here’s our look at week five of Clemson football:

The numbers that Clemson’s offense put up Saturday are, in a word, stunning.

While some might want to criticize the offensive production on a humid day in Death Valley, the numbers tell a bit of a different story, especially when you factor in that the Tigers were down to a backup quarterback, a starting right tackle, a receiver that usually plays an important part and were dealing with the emotional aftermath of a draining week.

That doesn’t mean there weren’t concerns – the game’s first turnover occurred after quarterback Trevor Lawrence tried to pull the ball too late out of Travis Etienne’s hands on a read-option play. That set up a Syracuse field goal. Chase Brice threw a late interception when the receiver seemed to stumble coming out of the gate. The offensive struggled early before finally settling into a groove. 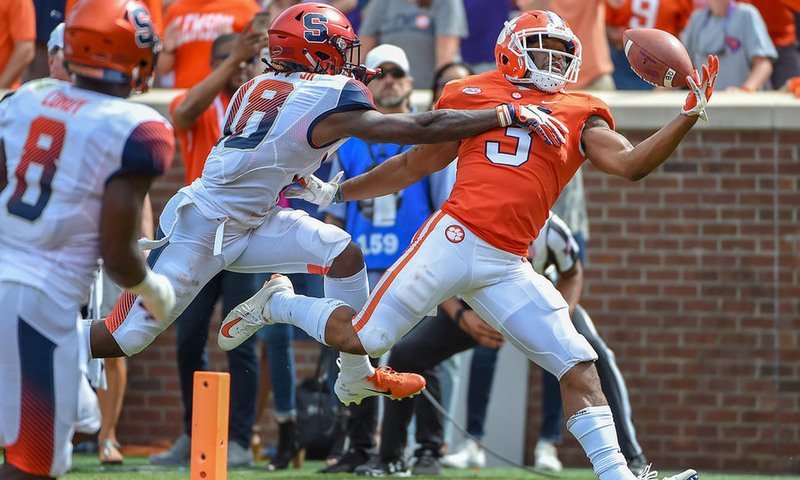 Amari Rodgers came close to a highlight-reel TD Saturday but had a tough day overall."

Travis Etienne rushed for 203 of Clemson’s 294 yards on the ground and Tee Higgins made a clutch grab on fourth down on the game-winning drive.

Things could have gone better, but they could have been much, much, worse. -- David Hood

As referenced above, the Clemson defense was placed on its heels from the start - and it delivered a pretty salty performance on Saturday.

All three Clemson turnovers - two on offense, one on special teams - occurred in Tigers territory and the defense managed to hold the Orange to 10 points off of them.

Depth woes - only further worsened by starting cornerback Trayvon Mullen's early third quarter injury - and some communication issues showed up in glimpses in the secondary, with the Syracuse 'Air Raid' attack also finding some mismatches. Like this 51-yard connection where backup safety Nolan Turner was locked in one-on-one with a slot receiver on a vertical route.

But on the day, Brent Venables' use of pressures and an improved containment on Syracuse QB Eric Dungey won the day. Dungey rushed for 61 yards in last year's upset versus Clemson but was held without a chunk-run play Saturday (10-plus yards) and just 11 total yards on 13 carries. Clemson's lone sack came late in the game but they did also total six QB hurries.

And on that sack, Clemson debuted a menacing look with essentially four defensive ends on the field in Xavier Thomas, Christian Wilkins, Austin Bryant and Clelin Ferrell. Thomas' freak talent was on full display, making a Syracuse offensive tackle pay for a late start:

Clemson's defense STEPPED UP late in the 4th. pic.twitter.com/UglyQwTf4V

Overall, a group effort on defense was able to mask some weaknesses and overcome some adversity against quite-likely the most challenging offense Clemson will face the rest of the regular season. -- Brandon Rink

The bad sticks out like a sore thumb when it comes to the special teams effort. A fairly-lengthy FG attempt (47 yards) from Greg Huegel going short and right early in the close game, and struggles all game long for punt returner Amari Rodgers, culminating in a crucial muffed punt that resulted in a Syracuse touchdown to start the fourth quarter.

Preseason first-team All-ACC punter Sterling Hofrichter hadn't had a punt returned on him this season - and you could easily see why, as his kicks hung in the air in time for the coverage team to converge on Rodgers. The first-year Tigers punt returner buckled under that pressure with a near drop to start the game and another he did fumble and recover before the late third-quarter play:

Renfrow came in and stabilized the situation with a fair catch before the game-winning 94-yard drive.

Clemson's kicking game did end up with a solid effort overall, however, with Huegel finishing by making his final two FG attempts and neither punter Will Spiers nor kickoff specialist BT Potter allowing a Syracuse return. Spiers landed three of his four attempts inside the 20 and averaged 40.2 yards per attempt.

Rounding out the special teams effort, the kick return game appeared to miss Cornell Powell (held for an academic issue), with an average starting field position of the Clemson 18 on three returns from Rodgers, Derion Kendrick and Lyn-J Dixon. -- Brandon Rink