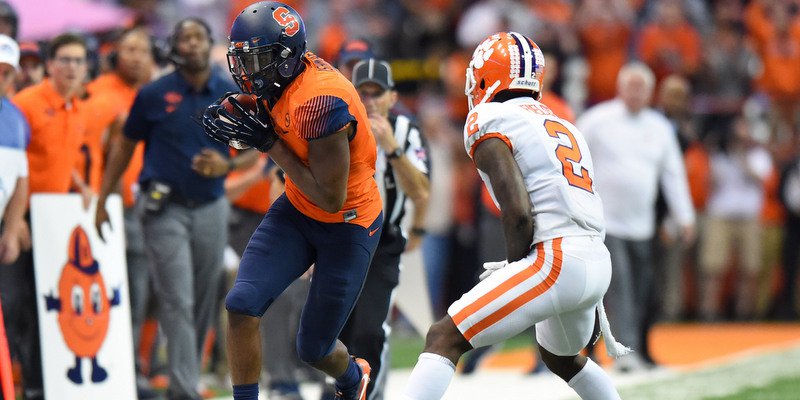 Syracuse managed to get big chunks of yards on the Clemson secondary (Photo by Rich Barnes, USAT)

I watched that game again so you don’t have to, and the stunning defeat didn’t look any better the second time around from a Clemson perspective.

These grades don’t include a separate coaching section because, at some level, it all works together. The coaches’ pregame planning and decision-making in-game on offense, defense and special teams factor into the execution of those units.

Like the Wake Forest game, the gameplan was thrown into a state of flux with starting quarterback Kelly Bryant getting knocked out, but this time, Clemson – in theory – was more prepared for Bryant not finishing the game because of the ankle injury.

No matter the win-loss result, however, it’s hard to imagine Clemson’s coaching staff will review the film, see Kelly Bryant hobbling around like he was and not think Bryant should’ve been pulled well before the blow that knocked him out of the game.

Bryant, who looked to be in pain from his first throw, did connect on his first nine attempts, including this nice downfield pass to Milan Richard:

Syracuse dared him to run as the half went on and Bryant just couldn’t do it. Here’s a play where the blocking could’ve been better on the outside, but a healthier Bryant also could’ve kept it for a keeper up the middle. By then, the Syracuse defense didn’t have to worry about that:

Playing Bryant after evaluating him in practice last week is understandable – he is the starter – and maybe the staff was looking to get to the half before a change, but keeping Bryant into that last series was puzzling in the very least.

Speaking of puzzling, it’s hard not to scratch your head seeing a stat-line of Travis Etienne and Tavien Feaster averaging 10.4 yards on only 12 carries combined. Now, they did their part in only needing so many carries to pull off a pair of long touchdown runs, but overall, this looked like a game where the blocking was there to push the running game more, however Syracuse stacked the front-seven.

The coaching staff stuck with Zerrick Cooper as the go-to if Bryant went down, and Swinney gave a positive review of his game afterward, saying Cooper didn’t get enough help, which is true on that account.

Cooper was as effective as any Clemson QB this season on early downs passing, averaging 7.6 yards per attempt with nine completions in 10 throws.

Conversely on third down, the struggles of a young QB under pressure showed. Cooper connected on only one third down pass in four attempts – sailing a couple well over their intended targets. The one completion was short of the sticks – his longest of the night, just 12 yards.

He also suffered some hard luck from drops and miscommunication on blocks that contributed in Etienne's long TD run being the lone end zone trip to go with a FG in Cooper's time out there (a missed field goal from chip-shot range certainly hurt as well).

Would Hunter Johnson have performed better? It’s tough to make a definitive evaluation for a true freshman in such a situation, but he did show some positive signs against Wake Forest. Given how practice reps are split, he, theoretically, had his chance to shine before the game and will get that chance as the season goes on.

Actually playing the games is the pesky reason why preseason projections often fall so short, and the Clemson offense is a prime example there. In a span of seven contests, Clemson has gone from underrated offensively and brimming with confidence to up-and-down and struggling through the attrition of a typical college football season. Where this group goes from here, coaching decisions included, is anyone’s guess.

Numbers to know: 8.7 – Clemson’s average yards to go on third down versus Syracuse, where the Tigers converted just once per half in 11 tries. 0 – Touchdowns in three red zone trips after reaching the end zone 85 percent of the time going into the game (fifth-best nationally). 57 – Clemson’s lowest play count since its last road game loss at Georgia Tech in 2014 (54), which also featured an early-game starting QB injury with Deshaun Watson.

That’s a rare combination for Clemson’s defense under Brent Venables, but Syracuse forced the issue in both areas to steal the win.

Syracuse’s tempo gave the Tigers fits at points, but quarterback Eric Dungey’s ability as a passer and a runner made the Tigers uncommonly flustered at the first and second levels. This was a second game in a row where an elusive QB gave them some problems, but Dino Babers’ group was far more equipped to break down Clemson’s defense than Wake Forest.

Dungey’s mobility was effective throughout – bottled-up here and there, but potent in key situations:

On the game-clinching designed run above, key Clemson defenders are steered in the wrong direction and Dungey goes up the middle to the marker. Sacks hurt his overall rushing total, but Dungey gained 102 yards on the night.

Elsewhere, a Clemson secondary that had stood tall for six games looked lost versus Syracuse’s mix of tempo and shifts in formation before the snap – reminiscent of how Pittsburgh attacked the Tigers last year.

No matter how well the Orange played – and they played really well – it was stunning to see the number of open receivers. Dungey was efficient passing, but he missed a few more open targets downfield.

They hurt Clemson a couple times on a fake screen-to-wheel route to the tight end, which is combined with their tempo to move the ball here:

Syracuse had three receivers with over 60 yards on the night, including Steve Ishmael, who was targeted 10 times and even had a TD come off the board in a pass interference back-and-forth with Mark Fields. He later got a mismatch with safety Tanner Muse for an easy score.

Speaking of Muse, the throat-slash gesture after his long TD run helped Syracuse to some of its best field position of the game (40 yard-line) and a field goal before the half. That was just one part in an uncharacteristic amount of penalties, which approached triple-digits in yardage just on the defensive side.

You won’t see many TDs easier than this one, where a strange mix-up of man and zone coverage didn’t account for the receiver slipping through for a TD:

Ishmael wrapped his big night with this key conversion – stopping on a dime at the marker, only for Fields to watch on after starting the play right at the line of scrimmage with him:

Venables has acquired a reputation for studying everything an opponent might attack with, and that seems to come with the effect that opponents tinker with their offense more than normal for the defending champs.

Some in-game injuries at corner didn’t help, but Clemson’s defense looked lost for most of the game against a Syracuse offense that was average at best efficiency-wise coming in. That’s a combination of good planning and execution from Babers and company, and also falls on Venables, who took on the blame afterward, and defensive leadership, for limping into the bye week.

Maybe the unique challenge of Georgia Tech in a couple weeks will be what the doctor ordered for the group to snap back into shape for the season’s second half.

Numbers to know: 94 – Clemson penalty yards just on defense, on eight flags. Clemson averaged five per game for 41 yards as a team going in. 61 – Dungey’s rushing yards on five scrambles, averaging 12.2 yards per. 80– Percent Syracuse conversions on third-and-short with Dungey in, all runs. 9 – Syracuse chunk plays (3 runs of 10-plus yards, 6 passes of 15-plus yards), where all but one came on first or second down.

In a close game, mistakes are magnified – and Clemson’s special teams group knows all about that.

Will Spiers placed three punts inside the Syracuse 10 to start his night, but taking the pass option on a rugby punt was a critical error that flipped the field and all momentum the Orange’s way as they ran off the final 6:10 off the clock. You can see Clemson’s head coach wondering just what the redshirt freshman was seeing on the play here:

One very wide-left field goal attempt may have been excused from former backup placekicker Alex Spence, but two – both from under 40 yards out – just can’t happen in a close game. Greg Huegel’s consistency and clutch-ness is so very missed, and there are no easy answers for use of the kicking game going forward this season.

The return game was quiet on both sides, and that shines a spotlight on a Clemson kickoff return group that’s been quiet all season. The Tigers could’ve used a spark there with a starting quarterback out and a defense on its heels.

Numbers to know: 34 – The average field goal distance for Spence, going 1-of-3 on attempts. 28 – Yards, Clemson’s longest kick return in nine attempts this season, which did come Friday from Etienne.