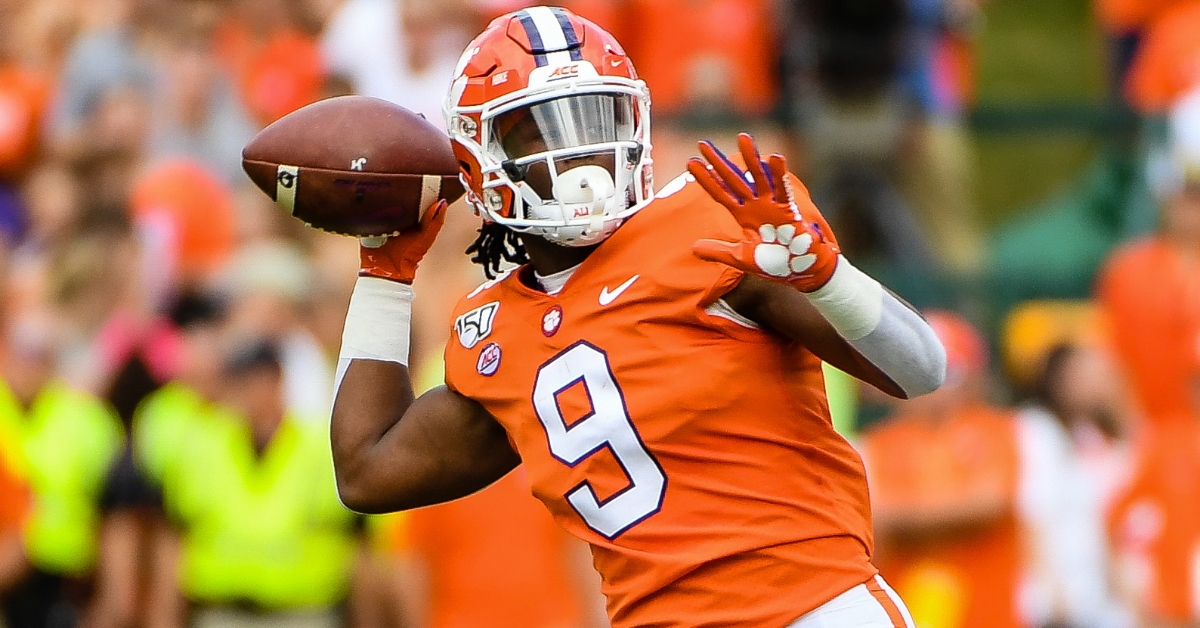 Clemson controlled the action from start to finish to stay unbeaten with a 45-14 win over Florida State on Saturday.

TigerNet tackles week six for the No. 2 Tigers with the key takeaways and game grades.

What we know about Clemson football (week six)

* Clemson’s offense came out on the attack Saturday, and it was head coach Dabo Swinney who led the way.

The first play of the game was a deep shot for a 40-yard gain to Tee Higgins. On the second play, running back Travis Etienne took a flip from quarterback Trevor Lawrence, rolled to his left, and fired a halfback pass to wide receiver Justyn Ross for a 23-yard gain.

Swinney said he wanted to make a statement right off the bat.

Swinney said he felt like the aggressiveness was a message he needed to send to his players.

"I just think our guys had a little edge to them that we didn't have up at North Carolina, and I needed to really send that message, and I did," Swinney said. "I told them, 'I don't even care. We may be three-and-out, punt, I don't care, but we're going to attack right from the opening snap.'" - David Hood

* Coming off of a less-than-inspiring effort at North Carolina, there were a few -- just a few -- lingering question marks about how the 2019 Clemson offense was going to attack opponents. Most of those were answered in two plays to start the game -- Swinney setting the aggressive tone to the matchup. 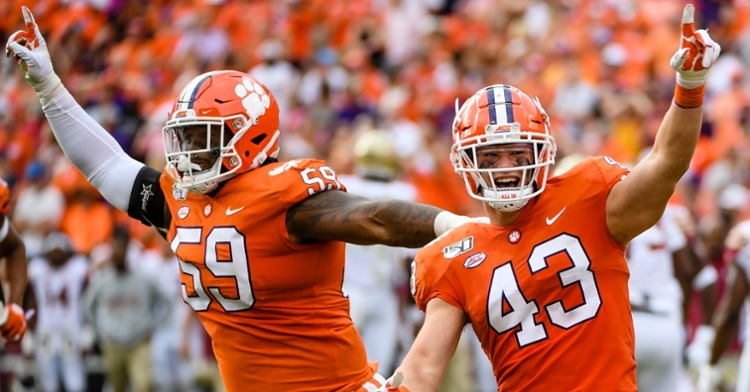 Seven of Clemson’s nine drives with Lawrence on the field ended up in the red zone and six were converted into touchdowns. There was a creativity to the offense that seemed to be lacking in recent games as well, using some motions and trickery to move the ball -- and also debuting the new the jumbo package that’ll need some work moving forward:

Safe to say, the bye week was used well and Lawrence is just fine, to answer queries whether text or audible. After struggling to connect in some games this season, he and Justyn Ross hooked up for five catches in eight targets for 61 yards and two touchdowns.

Etienne’s use has been another sticking point early with Clemson’s attack and he was made a priority, receiving double-digit touches in the first quarter and topping 100 yards rushing for the second time this season and the 11th time in his career (127 yards).

On defense, Clemson continues to impress with forcing turnovers, where they rank in the top-20 in turnovers gained (19th; 12) and passes intercepted (11th; 8). The constant pressure on whichever QB was in helped clear the way for three interceptions, including the pick-six by Derion Kendrick.

Brent Venables’ group made it a miserable day overall for the two QBs, James Blackman and Alex Hornibrook, who had combined to average over 300 passing yards without an interception versus Power 5/top-25 opponents this season. Per Pro Football Focus, Blackman rated 109th and Hornibrook, 110th, out of 111 QBs this weekend who played at least 20 percent of their team’s snaps. Only five QBs had worse passing grades this season than the duo, who combined to go 0-and-6 on throws of 20-plus yards.

FSU star running back Cam Akers was taken out of the game as well, who came in averaging 26 touches a game and only received nine carries for 34 yards on the contest.

Swinney’s major contention postgame was the backups not carrying on the dominance from the first-team effort. If that’s the biggest issue moving forward, that’s one that will: 1) probably decrease as the season goes on 2) only really going to be an issue in blowouts like Saturday. However, as we saw with this week’s polls, wins - even blowout wins - won’t automatically mean rankings (and possibly CFP committee) respect down the road. Clemson will need to continue to press down on the gas pedal to gain that extra favor going forward. - Brandon Rink

Clemson’s starting running back carried the ball 17 times for 127 yards in the win over Florida State, averaging 7.5 yards per carry. Etienne entered the game averaging a little over 13 carries per game, but hadn’t registered a 100-yard rushing effort since gaining 205 in the opener against Georgia Tech. Etienne averaged 17.08 yards per rush against the Yellow Jackets, but averaged just 3.31 ypr against Texas A&M, 5.43 ypr against Syracuse, 5.55 against Charlotte and 4.79 against UNC.

The 17 carries were also a season-high. The difference? Fewer run-pass option plays, where the quarterback can hand the ball off to his RB or throw a quick pass to a receiver based on the movement of a single defender, and more designed run calls.

“I thought Travis responded well. He’s been running the ball hard all year,” Tony Elliott said after the game. “The biggest thing was getting him into a rhythm, and part of that we getting him so no-doubt touches by taking away some of the RPOs.” -- Nikki Hood

They played with an edge from play one and the first-team group looks primed to really put up some points in the regular-season’s second half.

Venables continues to have his guys primed to perform when needed - and with a Clemson offense complementing that effort, the Seminoles didn’t stand a chance.

You tend to really remember the bad -- and Clemson’s head coach certainly let his young kicker BT Potter know exactly how he felt about missing a chip-shot attempt to end the first half. New first-team place-kicker Steven Sawicki stepped in from there and hit all his kicks. Will Spiers shook off a rough first punt attempt (29 yards) to finish with a 43 per average, including two of his three landing inside the 20 and one going 52 yards. FSU’s return game then wasn’t allowed to provide any spark for the struggling Seminoles in the offensive and defensive phases.