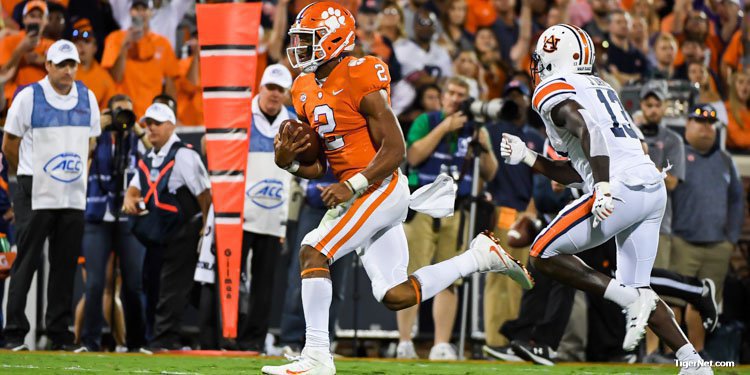 A win is a win, and although the score wasn’t pretty, Clemson made enough plays in a clash of talent-rich rosters.

After a second look at the game, here’s how Clemson grades:

Auburn’s speed defensively was a shock to the system – especially early – for junior starter Kelly Bryant and company, but after taking some licks, Bryant adjusted to the flow of the game to make big plays going into the half and in the second half.

I’m kind of grading on a curve with the caliber of that defense and a new starting QB here. Bryant’s first seven throws – before getting knocked out of the game for four plays – averaged 3.6 yards per pass. He went on to average seven yards per pass – his touch on throws down the sideline to Ray Ray McCloud and targets to Hunter Renfrow in key situations showing he has the arm and accuracy to break down high-level defenses.

His comfort level on the run was apparent as the game progressed as well. Pre-injury, Bryant had only two rushing yards on two true run attempts (taking out sacks). Taking out sacks, he averaged 5.8 yards per carry from then on, including the game’s only two touchdowns.

In the receiver group, McCloud posted the best big-game performance of his career with six catches in seven targets for 81 yards. Renfrow proved to be reliable as usual. Deon Cain went up for a couple tough grabs, but was targeted only four times.

There’s plenty of room for improvement, especially when it comes to blocking, but Auburn’s front-seven was a heck of a test. No one running back stood out from the pack, with redshirt junior Adam Choice getting the most opportunities (seven carries, 2.4 yards per). C.J. Fuller fumbled, but he wasn’t helped by a defender coming unblocked from the backside of the play. It will be interesting to see if freshman Travis Etienne gets some more opportunities in a big divisional matchup this week at Louisville.

Overall, like the Kent State opener, co-offensive coordinators Tony Elliott and Jeff Scott have something they can build on with an offensive cast that will improve as the season goes on.

Simply dominant. At all levels.

Auburn quarterback Jarrett Stidham had nowhere to go with the ball and that accounted for the eye-popping sack total (11). Clemson’s corners had a few issues early with penalties, but for the majority of the game, they locked down Auburn’s targets and forced Stidham to scramble, largely unsuccessfully, thanks to big nights from Christian Wilkins (10 tackles, 2.5 TFL, 2 sacks), Dorian O’Daniel (14 tackles, 10 solo, 1.5 sacks, 2 TFL), Kendall Joseph (9 tackles, 0.5 sack) and Austin Bryant (4 sacks, 7 tackles).

Big bruising back Kamyrn Pettway was contained to only one explosive run (15 yards) and 3.4 yards per carry overall.

Maybe more impressive than anything was how deep Clemson proved to be defensively. Auburn had the Clemson defense on the field over 13 of the first 16 minutes in the game, but only managed six points. And then didn’t score again.

Sophomore safety K’Von Wallace stepped in for injured starter Van Smith and made three solo stops – including a couple on third down. Junior linebacker J.D. Davis came off the bench for a crucial goal line stop and added a sack later. Sophomore linebacker Chad Smith posted a tackle for loss and three total tackles in his first big-time action.

Clemson’s ability to rotate and not lose a step will serve them well as the season goes on. Next up? The toughest test this defense will face all season in Louisville, where we’ll find out even more about this group.

It was a quiet night for the Clemson special teams group, which is good more often than not.

New starting punter Will Spiers impressed with two punts of 50-plus yards (long of 53) and a 42.7 yards per average.

Greg Huegel’s one 46-yard field goal attempt was off wide-left and never had a chance.

Kick and punt returns really weren’t a factor for either side in the close contest. Clemson only had one kick return attempt (Cornell Powell for 21 yards).