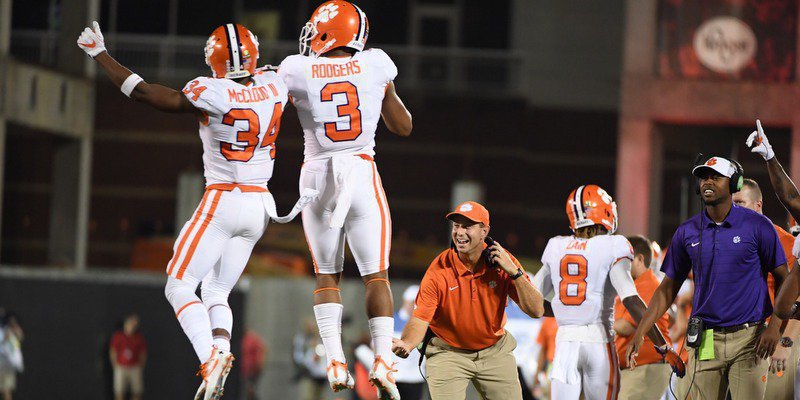 I love a good dystopian novel.

I’m not sure what it says about me, deriving such interest and pleasure in authors’ interpretations of how the end of the world will transpire. I guess it would be more damning if I read these novels rooting for the apocalypse. Instead, it fascinates me to see how the surviving members try to put everything back together, fighting to overcome the numerous challenges that face them, usually without the benefit of those who helped build the original society.

The way the Clemson football team — particularly the Clemson offense — was discussed in the build-up to the 2017 season echoed a dystopian novel.

The apocalyptic event? The loss of transcendent quarterback Deshaun Watson, along with a sizable portion of the skill-position players who led the Tigers to the program’s second national championship in January.

The pandemic had ravaged the very same offense that was the difference in the 35-31 win over Alabama in Tampa, Fla.

Now, it wasn’t all doom and gloom coming into the season. The defense retained some of its key contributors, particularly along the defensive line, but there were casualties as well. On-the-field leaders were lost in Ben Boulware, Carlos Watkins and Jadar Johnson, and a pair of decorated assistant coaches departed in Dan Brooks to retirement and Marion Hobby to a job with the Jacksonville Jaguars.

No one was predicting that Dabo Swinney’s team would fall off the proverbial cliff, but the voices proclaiming Clemson would be still around to defend its title in the College Football Playoff were few and far between. Florida State was the consensus pick to come out of the ACC, and fellow Atlantic Division teams Louisville and N.C. State were bandied as dark horses about as often as the reigning champs were.

As for myself, I felt like the Tigers had too much talent to lose more than four games, but faced too many question marks to predict them losing fewer than two.

Could Kelly Bryant sure up his grasp on the starting job at quarterback, and how would he perform if he did? Could any of the running backs step into a starring role to take the pressure off of him? And could mercurial talents like Deon Cain and Ray-Ray McCloud finally be counted on to provide Bryant a reliable outlet at wide receiver?

Well, through 12 quarters of football, it appears that the reports of Clemson’s offensive demise were greatly exaggerated.

Sparkling offensive performances were sandwiched around a slugfest where the unit made enough plays to get the win over Auburn. If a season-opening rout of Kent State was to be expected even with a diminished offense, Saturday night’s 47-21 victory over Louisville was a statement of intent. There’s still a lot of horsepower in the offensive machine that Watson and Company rode to back-to-back playoff runs and the man at the wheel now is Kelly Bryant.

We knew that Bryant’s legs would bring a dynamic element to the offense, as three of his four career touchdowns coming into the season were on the ground and he’s already added five rushing scores through the first three games.

However, Bryant has been far from a run-only threat thus far.

Both of his touchdown throws have come on long passes to wide-open receivers — a 61-yarder to Cain against Kent State on his second drive of the season and a 79-yarder to McCloud against Louisville — but both were delivered on the money, as neither receiver had to break stride en route to the end zone. The number of impressive throws he has made has increased on a week-to-week basis with some of his best work coming on third down, where he’s 14-of-22 with 13 of those completions extending the drive.

On Saturday, as Lamar Jackson was frustrated by the Clemson defense, there was only one quarterback who made plays befitting of a Heisman Trophy contender, and it wasn’t the guy who knows exactly how heavy that trophy is to pick up and is starting to find out how heavy it may be to carry.

As football is a team sport, you shouldn’t be surprised to hear that Bryant is not alone in helping the Clemson offense maintain its firepower. Cain and McCloud have taken on starring roles after the loss of contemporaries Mike Williams and Artavis Scott, while Hunter Renfrow — remember him? — is still perpetually open, available and reliable in critical situations. And in the running game, the talent rising to the top as sophomore Tavien Feaster and freshman Travis Etienne have turned in sparkling performances that contradict their current spots on the depth chart, although here’s guessing the latter will change before the former. The pair have the making of a classic combination in the backfield, ironically with the man wearing No. 28 — Feaster — providing the between-the-tackles steadiness, while Etienne’s electricity and big-play threat echo the former Clemson star whose name adorns Feaster’s jersey. 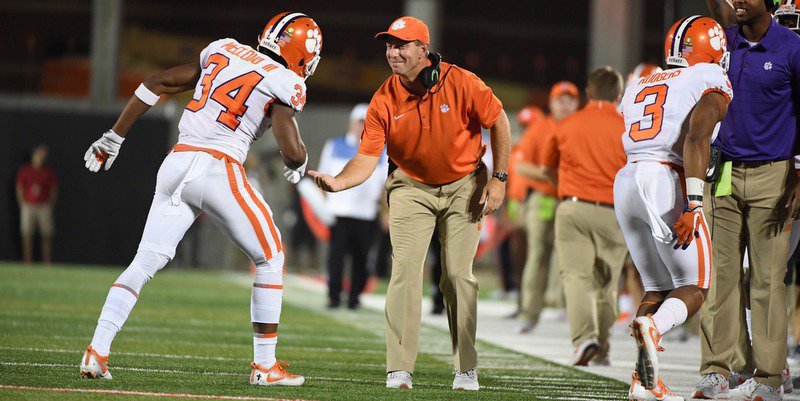 While the offense has vastly exceeded the expectations placed upon it in preseason, the highest compliment that you can pay Brent Venables’ defense is that it has been as advertised. Before a pair of garbage-time touchdowns on Saturday night, opponents had scored 3, 6 and 7 points in the first three games and the lone offensive touchdown was later negated by a defensive score by senior linebacker Dorian O’Daniel, the team’s leading tackler who has risen to the occasion in his first chance to be a regular starter.

My caveat before the season was that Clemson may still have a chance to repeat if the defense allowed 10 points per game during a grueling September. Even with those garbage-time touchdowns, the unit has allowed exactly 10 points per game thus far.

So here we are, three games into the predicted wasteland that was supposed to swallow up Dabo Swinney’s Clemson Tigers and everyone in orange appears to be fine. Yes, there are 10 games that need to be played before we find out if they will have the chance to defend their crown, but the path to Atlanta — and perhaps a rubber game in the three-title-game set with Nick Saban’s Alabama — is much clearer than it was before toe met leather on Sept. 2.

Perhaps — at least so far — no great loss.

Robbie Tinsley is a lapsed sports writer, who now resides in Cambridge, Mass.