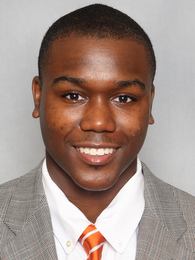 Safety
B I O
Senior who thrived in his lone season as a starting safety ... amassed 106 tackles, nine interceptions and 12 pass breakups in 1,484 snaps over 54 games (17 starts) in his career.

2016: First-team All-ACC (media, coaches) ... one of six permanent team captains ... shared Tiger Pride MVP Award honors defensively with Ben Boulware and Carlos Watkins ... recipient of defensive Hustle Award ... produced 65 tackles, five interceptions and seven pass breakups in 913 snaps over 15 games (15 starts) ... posted big game with an interception and two pass breakups on final possession of close win at Auburn ... posted four tackles and a pass breakup against Troy ... notched an interception and six tackles against No. 3 Louisville, earning co-defensive player of the game honors from coaches ... posted six tackles and a pass breakup against NC State ... notched fourth interception at Florida State, it was his second career pick in Tallahassee (2014) ... had six stops and a pass breakup against Syracuse ... notched fifth interception of the season in the opening quarter of the win over South Carolina, a big moment for the senior who grew up a Gamecocks fan ... also had 1.5 tackles for loss in the rivalry game ... posted six tackles and a caused fumble in Fiesta Bowl win over Ohio State ... notched nine tackles, including half a tackle for loss, with a caused fumble in National Championship Game against Alabama.

2015: Tied for second on the team with two interceptions, while also contributing 16 tackles in 231 snaps over 15 games (one start) ... logged 32 plays against Appalachian State ... made game-clinching interception as time expired in the road win over Louisville, his third career takeaway ... posted four tackles in 25 snaps against Notre Dame ... blocked a punt that resulted in a safety against Georgia Tech ... broke up a pass in the Boston College win ... provided big interception early that gave Clemson all the momentum in 58-0 win at Miami ... posted two special teams tackles against Florida State ... earned first start of the season in the Capital One Orange Bowl and contributed three tackles in 28 snaps.

Before Clemson: Rated as the No. 80 athlete in the nation and No. 9 player in South Carolina by ESPN ... No. 28 safety in the nation by Scout.com ... played in the Shrine Bowl of the Carolinas ... had 50 tackles, four interceptions and 10 pass breakups as a junior ... PrepStar All-Southeast Region selection ... attended the same high school that sent all-time great Woodrow Dantzler (1998-01) to Clemson ... coached by Tommy Brown at Orangeburg-Wilkinson High School ... recruited by Marion Hobby ... played on same AAU basketball team with Kris Jenkins, who scored the game-winning shot for Villanova in the 2016 NCAA Championship game, first-round NBA Draft choice Brice Johnson of North Carolina, and former Clemson guard Jordan Roper.