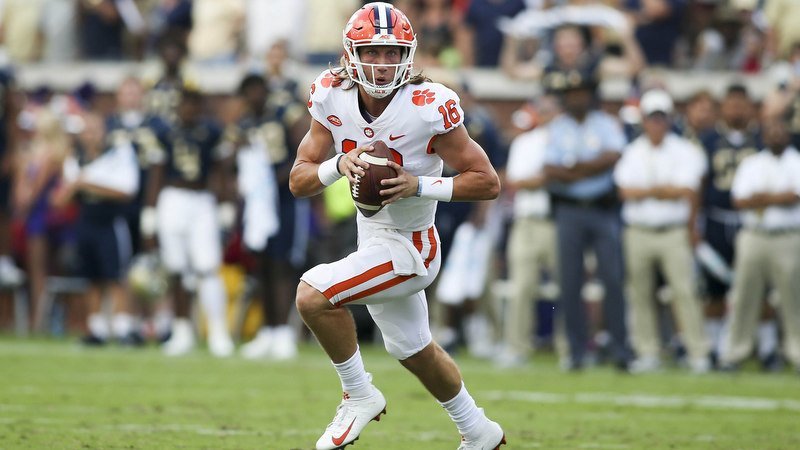 ATLANTA, GA – Clemson head coach Dabo Swinney told the media earlier this week that Georgia Tech head coach Paul Johnson is successful because Johnson has answers for everything. Johnson had no answers for Trevor Lawrence or Clemson’s defense Saturday.

A Johnson-coached team hasn’t started 1-3 since Navy started that way in 2002. Clemson opens 4-0 for the fourth consecutive season and the fifth time in the last six years. The win was also the fourth in a row for the Tigers over Tech, matching the longest streaks in the series.

Starter Kelly Bryant led two ineffective series to start the game, but Lawrence came in and led scoring drives on four of the next five possessions, including three of the last four of the first half as the Tigers led 28-7 at the break.

Bryant finished the day 6-of-10 for 56 yards. Lawrence was 13-of-18 for 176 yards and four touchdowns. Travis Etienne had 11 carries for 122 yards and Tavien Feaster had eight carries for 75 yards to lead the Tigers’ rushing attack.

"I thought this was our best game of our four games to this point," head coach Dabo Swinney said. "I'm really pleased with the things we tried to do in this game and that I saw take place in the game. It's a really good start for us in conference play. To have two wins on the road already at this point in the season is great experience for our team as we get deeper into conference play."

Swinney said he was pleased with the spark Lawrence provided.

“He certainly played great,” Swinney said of Lawrence. “I thought Kelly came back in and did a good job, too. We're going to enjoy it tonight. We're not going to set the depth chart here in the postgame press conference. We're going to celebrate a win, enjoy it and as coaches, we'll get back in the office tomorrow, evaluate and watch all the tape and go from there."

“We got our tails kicked,” Johnson said. “We got outplayed, outcoached, and we got beat by a really good team.”

The Jackets took the opening kickoff and used almost half the quarter in reaching the Clemson 18-yard line in eight plays. They went backward from there, however, and wound up punting after a sack and motion penalty took them out of field goal range.

The Tigers earned a quick first down but eventually punted, and Georgia Tech continued to go backward. The first play for the Jackets lost five yards, 10 more were lost on a sack, and a fumble on the third play was recovered in the end zone by Clelin Ferrell. With 3:42 to go in the first quarter, Clemson held a 7-0 lead.

"To see them score was awesome," Swinney said of the defense. "I thought we had another opportunity or two to score, or to certainly give us a short field, but we just couldn't come up with the ball. But I was really pleased with just how disrupitve we were, defensively."

The Tigers took over at their own 26, and seven plays later Lawrence rolled out and hit Hunter Renfrow in the corner of the end zone for a 17-yard scoring toss. Just over five minutes into the second quarter Clemson led 14-0.

The Tigers added to the lead on the next drive. The Tigers took over at their own 45 and Adam Choice gained two yards on the first play. The Tigers faked the run to the same with Choice on the next play, but Lawrence kept the ball and found Justyn Ross alone down the right sideline. Ross gathered in the pass and scored from 53 yards out for a 21-0 lead.

Lawrence was intercepted on the next Clemson possession – it glanced off the helmet of a lineman on middle screen – and Tech took advantage with an 11-yard scoring run from Tayquon Marshall that made it 21-7 late in the half.

The Tigers took over with under two minutes to play and Lawrence led a 12-play drive that took all but five seconds off the clock. Two tough completions set up a 21-yard completion to Amari Rodgers, giving the Tigers the ball at the Jacket 3-yard line with 11 seconds left on the clock. The Tigers called a timeout and Lawrence flipped a shovel pass that Travis Etienne carried into the end zone for a 28-7 lead at intermission.

The opening possession of the second half was more of the same. The Tigers drove 75 yards in just seven plays – five of them rushes – and Tavien Feaster capped the drive with a 27-yard touchdown run that made it 35-7 with 12:20 to play in the third quarter.

Another Tech punt turned into another Clemson touchdown. Bryant came back in and led a 10-play, 83-yard drive that featured more work on the ground. Etienne finished off the drive with a three-yard scoring run and Clemson led 42-7 with 5:10 to play in the third quarter.

Thirty yards in penalties allowed Tech to score a second touchdown late in the third, and Clemson led 42-14 at the end of three, and a bevy of reserves allowed another Tech touchdown that made it 42-21 midway through the final stanza.

The coaches reinserted Lawrence, and all he did was lead a five-play, 77-yard drive that ended with a 30-yard scoring toss to Tee Higgins and a 49-21 lead with just over four minutes to play in the game.

Clemson hosts Syracuse at noon next weekend in Death Valley. The Orange gave the Tigers the only regular-season loss last season.