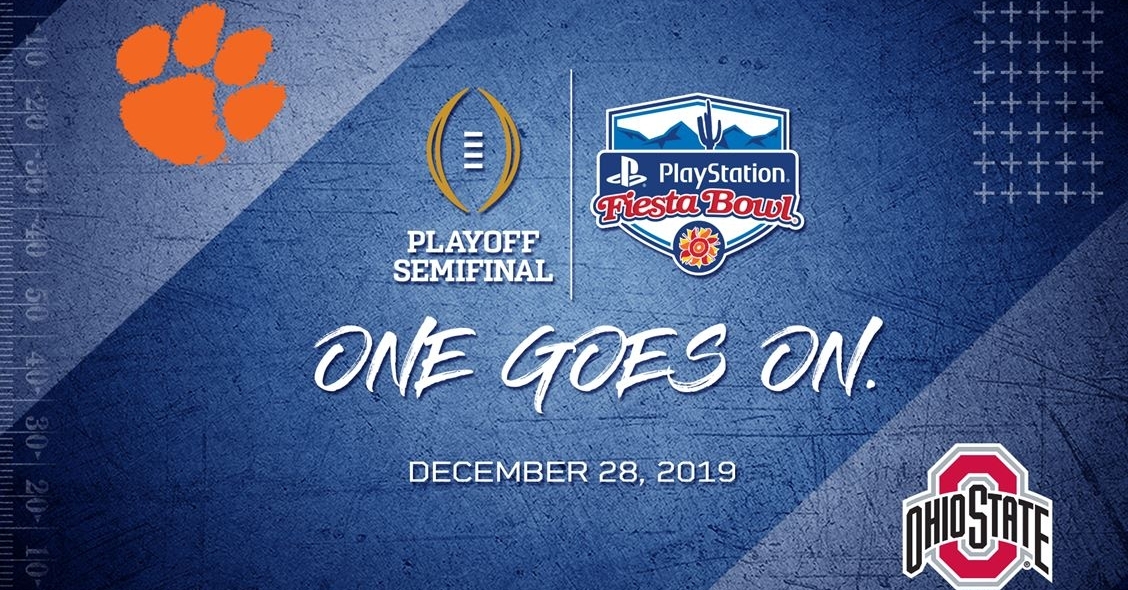 One of the most anticipated matchups in College Football Playoff history happens Saturday in Glendale between No. 3 and No. 2 Ohio State We’ll call it the Dustup in the Desert.

The winner of Saturday’s College Football Playoff Fiesta Bowl will advance to play the winner of the Peach Bowl in the National Championship Game on Jan. 13th in the Superdome in New Orleans.

*The game will be a rematch of Clemson’s only prior Fiesta Bowl appearance in school history. On Dec. 31, 2016, the second-seeded Tigers shut out the third-ranked Buckeyes in a 31-0 victory that sent Clemson to its second straight College Football Playoff National Championship Game. The 31-point victory was the worst margin of defeat in a bowl game in Ohio State history and marked the first time an Urban Meyer-coached team had been shut out in 194 games as well as the first time Ohio State had been shut out since 1993.

*Though Ohio State enters the bowl season with the second-most all-time wins in FBS history, Clemson holds a 3-0 all-time record against the Buckeyes. The two programs first met in the 1978 Gator Bowl in Jacksonville, Fla., a 17-15 Clemson victory that represented Danny Ford’s first game as Clemson head coach and Woody Hayes’ final game as Ohio State head coach. The game is perhaps most notorious for an interception by Clemson’s Charlie Bauman with two minutes left, in which Bauman picked off an Art Schlichter pass and was punched by Hayes upon running out of bounds on the Ohio State sideline.

Make no mistake, the Buckeyes have talent all over the field. A dynamic young quarterback in Justin Fields, an NFL running back in J.K. Dobbins, a road-grading offensive line and athletic wide receivers.

Fields has been consistently great all season. The Georgia transfer connected on 67.5 percent of his passes for 2,953 yards and 40 touchdowns to just one pick. Fields also ranked second on the team with 10 rushing touchdowns is third on the Buckeyes in rushing yardage (471). The sophomore suffered a knee injury in the win over Penn State on Nov. 23 and aggravated the ailment on Nov. 30 against Michigan. He might be limited against the Tigers.

J.K. Dobbins is closing in on 2,000 yards (1,829) and has scored 20 times on the ground this season, while the receiving group has five players with at least 21 catches. Chris Olave and K.J. Hill have combined for 21 receiving scores.

Clemson has played with a 3-man front at times this season, but against the Buckeye ground game might have to go to a four-man front. Linebacker Isaiah Simmons will bring pressure from all over the field, while linebacker James Skalski will be tasked with stopping Dobbins while also keeping an eye on Fields. It wouldn’t be surprising to see defensive coordinator play three safeties – play Nolan Turner and K’Von Wallace deep, allowing Tanner Muse to act as an extra linebacker against the run game.

The Buckeyes have played a tougher schedule than the Tigers this season, but they haven’t seen anything close to what they will see Saturday in the Clemson offense. Quarterback Trevor Lawrence drew criticism early in the season, but he’s been playing on another level since the win over Louisville in early October. He hasn’t tossed an interception since Oct. 19 and ended the regular season by completing 68.8 percent of his throws for 3,172 yards and 34 touchdowns to eight picks. Lawrence is also utilizing his legs more this season, with 407 yards and seven scores over 77 carries in ’19.

Running back Travis Etienne is arguably the nation’s best back. Etienne has rushed for 1,500 yards and 17 scores (8.24 ypc) on just 182 attempts. Backup Lyn-J Dixon (619) is also dangerous. Lawrence is playing at a high level, but he has weapons all over the field. Tee Higgins and Justyn Ross have combined for 21 touchdown grabs this season, while Amari Rodgers is dangerous in the slot.

Buckeye defensive end Chase Young (16.5 sacks) creates havoc wherever he lines up. If Clemson has success blocking Young with either Jackson Carman or Tremayne Anchrum it will free up other playmakers. If Young starts to get pressure in 1-on-1 matchups the Tigers will have to chip with a running back or tight end. An X-factor could be tight end Braden Galloway, who is back after serving a year-long suspension.

Both units are good, but Lawrence is the difference.

Blake Haubeil is 10-for-12 on field goals while punter Drue Chrisman averages over 44 yards per punt. We all know Clemson is average in the punting game and kicker B.T. Potter is inconsistent.

These are two great teams, and when two evenly-matched teams face off the difference is five or six plays per game. I think Travis Etienne has a big game. Teams had success running away from Chase Young, and you have to believe that Tony Elliott will probe the Ohio State defense early and often, hoping to create gaps in the Buckeye defense later in the game. I also think Dobbins will play a big part – teams that have wanted to run the ball against Clemson and stuck with it have had some success.

The difference? Lawrence has been here, and he’s healthy. Fields might be hurting and if he can’t run, it limits the offense. Ohio State will score more points on the Tigers than anyone else has this season, but the Tigers start to pull away early in the fourth quarter.