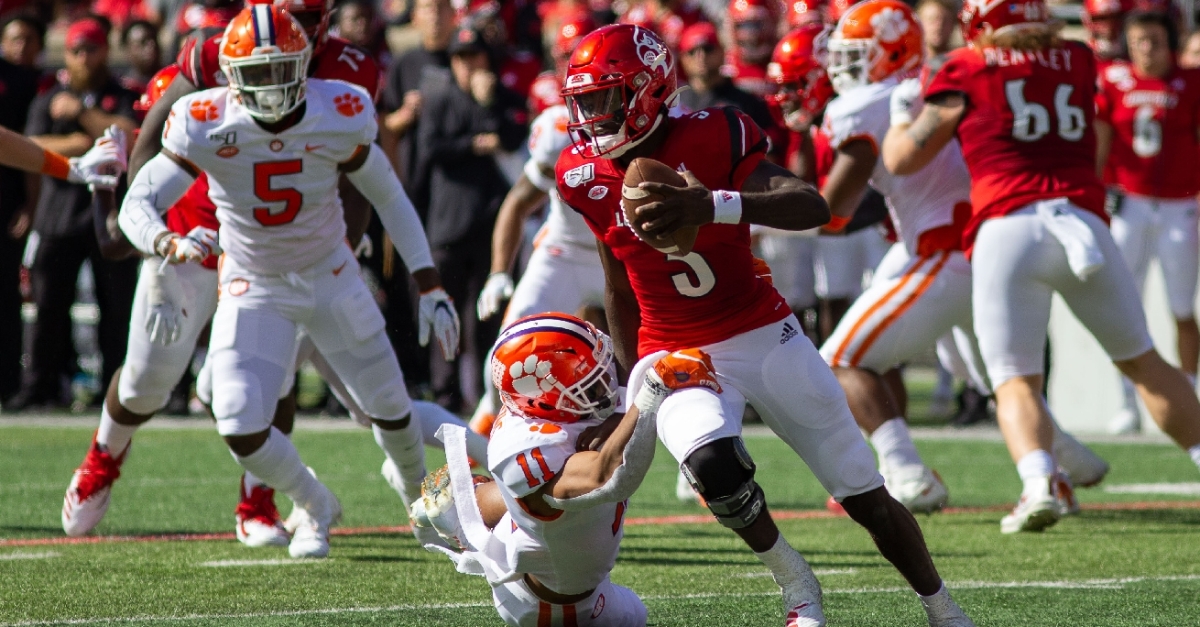 Isaiah Simmons racks up one of his two sacks against Louisville.

LOUISVILLE, KY – Clemson’s offense took time to get going, and the defense did its part while the offense tried to find a rhythm.

No. 2/3 Clemson steadily pulled away from Louisville behind the running of Travis Etienne and a tenacious defense that earned six sacks as the Tigers defeated Louisville 45-10 Saturday afternoon at Cardinal Stadium. Clemson improves to 7-0 overall and 5-0 in the ACC. Louisville falls to 4-3 overall and 2-2 in the league.

Etienne carried the ball 14 times for 192 yards while Trevor Lawrence finished the day with 10 carries for a career-high 47 yards. Lawrence had two early interceptions but settled in to finish 20-of-29 for 233 with three touchdowns. Justyn Ross had five catches for 55 yards.

Louisville took the opening kickoff and quickly reached Clemson territory. Facing a 1st-and-10 at the Clemson 46, Card quarterback Micale Cunningham threw deep into the end zone, but the pass was intercepted by K’Von Wallace for a touchback.

Travis Etienne ripped off a 48-yard run on the Tigers’ first play from scrimmage but the drive bogged down and the Tigers settled for a 51-yard field goal from B.T. Potter or a 3-0 lead at the 9:27 mark of the first quarter.

The story of the rest of the first quarter was turnovers – Lawrence threw two interceptions but the Cardinals kept giving it back. The Tigers forced an early second quarter punt and Clemson took over at its own 19. Six plays later Clemson faced a third-and-goal at the six, and Lawrence escaped pressure and found freshman receiver Joseph Ngata in the back of the end zone for a scoring strike. The touchdown was set up by a 61-yard pass to Amari Rodgers. With 10:41 to play in the second quarter, Clemson led 10-0.

Louisville got a 28-yard field goal from Blanton Creque midway through the quarter that made it 10-3, but both defenses continued to hold strong. Clemson forced a Louisville punt late in the half and the Tigers took over at their 23 with 1:05 left on the clock.

In the second quarter, Lawrence was 9-for-9 for 156 yards and Clemson led 17-3 at intermission.

Clemson punted to start the second half and Louisville picked up a quick first down. On the next set of downs the Cardinals were stopped a yard short on third down and head coach Satterfield elected to go for it on 4th-and-1 at the Louisville 46. Javian Hawkins was stopped for a yard loss and Clemson took over on downs at the Louisville 45-yard line. However, Steven Sawicki missed a 44-yard field goal and the score stood at 17-3 with 9:14 to play in the third quarter.

The Tigers got back on the board late in the third quarter. Rodgers set up the drive with an 18-yard punt return to the Clemson 42. Two plays later Etienne hit the middle, bounced off of a defender and outraced everybody to the end zone for a 49-yard scoring run. With just under two minutes to play in the quarter Clemson led 24-3.

The Tiger defense forced another punt and the Tigers ended the drive with a 10-yard pass from Lawrence to Cornell Powell. Early in the fourth quarter Clemson led 31-3.

On the ensuing possession, Louisville quarterback Evan Conley was blasted by Justin Foster as he threw the ball and it was intercepted by A.J. Terrell at the Clemson 47 and he returned it 28 yards to the Louisville 25. Five plays later Darien Rencher scampered in from eight yards out for his first career touchdown, and with 10:14 to play Clemson led 38-3.

The Cardinals added a touchdown with 5:10 left against a bevy of Clemson reserves to make it 38-10.

The Tigers subbed liberally on offense and still put together a 10-play, 75-yard drive that ended with a 16-yard scoring run by Chez Mellusi. With a minute left to play the Tigers led 45-10.

Clemson returns to action next Saturday, hosting Boston College at 7:30 pm (on Homecoming) on the ACC Network.

Clemson vs Louisville Box Score
Get the latest Clemson gear right here!
Comment on this story