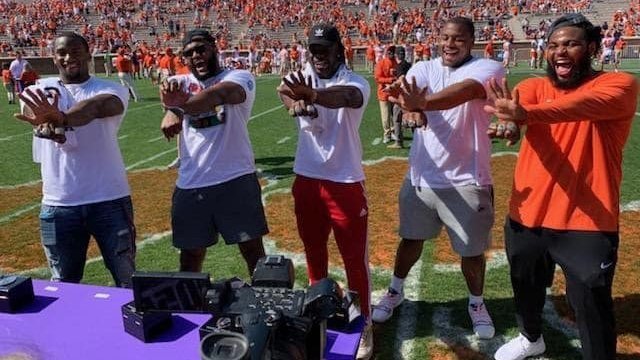 The Power Rangers show off their new hardware Saturday

CLEMSON – Clemson has had plenty of memorable moments and slogans over the last decade, from the ROY Bus to Bring Your Own Guts to Pizza Parties in Death Valley to Best is the Standard to All In. After Saturday’s three-hour infomercial on ESPN, Best Ever has to find its place.

The National Champs held their annual spring game Saturday in Death Valley, and what transpired couldn’t have been scripted any better. There were ESPN analysts Kirk Herbstreit, Joey Galloway, and Marty Smith roaming the middle of the field having football conversations with head coach Dabo Swinney. Those conversations were so casual they could have been had over the adult beverage of your choice at the Esso Club, but instead, they were held as defensive linemen rushed their way.

The telecast soon turned into the Dabo Swinney Hour as he discussed everything from the routes being run to why quarterback Trevor Lawrence threw to one side of the field and not the other. In a time when the doors to the Clemson football facility are increasingly being closed to the media, it was a refreshing and candid look at the mind of the Tigers’ head coach.

Torrential rains have hit the area for months, and colder weather has hung around longer than some people would like, but Saturday was a Chamber of Commerce kind of day from a weather perspective on a sun-dappled and near-perfect afternoon in the foothills.

On hand to watch everything were some of the nation’s best prospects, including guys like quarterback DJ Uiagalelei, Bryan Bresee, Demarkcus Bowman, RJ Mickens, and Fred Davis.

Other spring games were televised, but the head coaches looked miserable, and the play on the field was lackluster with no kickoffs or punt returns or much of a pulse from the players on the field. There might have been pizza parties after some of those games, but surely they were dull and cheap affairs.

The shining moment came at halftime – Swinney gathered the seniors from last year’s team at midfield for the ring ceremony, where each player was presented with an ACC Championship Ring, a College Football Playoff ring, and a National Championship ring. Front and center were guys like Christian Wilkins, Clelin Ferrell, and Austin Bryant, the backbone of the title team.

A video montage played on the big screen, and it made a point of playing all of the sound bites from the talking heads last season – Paul Finebaum and his ilk – who anointed the Alabama football team as the best ever. About 45 seconds in, the screen quickly flipped to a shot of Justyn Ross running past Alabama defenders and into the end zone and the stadium erupted with cheers.

Swinney then grabbed the microphone and said there was a lot of conversation about “best ever” last season, but none of those conversations involved Clemson. He finished with, “But at the end, it was a drop the mic, open your ring moment.” Swinney then literally dropped the mic to the cheers of the Clemson faithful as the Power Rangers showed off their hardware.

The best news, however, is that all of that was just a side note to the team Swinney will have in 2019. There have been and will be questions about leadership and the loss of so much experience and talent, but Swinney was only too happy to point out his “high school players” (the mid-year enrollees) to Herbstreit and Galloway. It was his way of saying that there is a lot of talent still on campus, and it was evident, from Justin Foster to Xavier Thomas to Sheridan Jones to Joseph Ngata to Frank Ladson.

Marty Smith said after the game that the talent level is “just not fair.”

He told us after the game that last year’s team was a cake that was already baked, and they just had to go out and do it. The 2019 cake is still being made, and it might take a while for it be fully baked, but all of the ingredients and more are there for yet another tasty season.