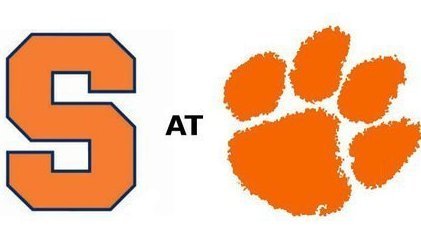 Welcome to the Trevor Lawrence era at Clemson.

Lawrence, the Tigers’ highly-touted freshman quarterback, makes the first start of his collegiate career Saturday when No. 3 Clemson hosts Syracuse in a noon matchup in Death Valley. After Lawrence lit up Georgia Tech in spot duty to the tune of 176 passing yards and four TDs, Clemson officially named him the starting QB over senior Kelly Bryant.

Many anticipated this might happen, given Bryant’s struggles to get the passing game going against better defenses in 2017 (particularly Alabama) and Lawrence’s rare talent. So far in 2018, Clemson’s offense has been more efficient under Lawrence, significantly so on passing downs. The ascension of Lawrence led to Bryant making the decision to transfer earlier this week, leaving the Tigers with three freshmen quarterbacks on the roster. As in, none of the quarterbacks on the roster have ever started a college football game.

*Syracuse grad Sean McDonough will be on the call for ABC.

*Syracuse has not trailed in any game this season.

Clemson cornerbacks coach Mike Reed played for Syracuse football legend Tom Coughlin at Boston College. Coughlin coached the Eagles from 1991-1993 before moving on to the NFL.

*All-time Syracuse great Larry Czonka visited Clemson during his recruiting process in 1963 reportedly considered Clemson, Vanderbilt, Iowa and Syracuse. Recruited by Clemson Coach Frank Howard, Czonka would have been a freshman at Clemson in 1964 and then played from 1965-67. Even without Czonka, the Tigers won the ACC in all three seasons.

Syracuse likes to play fast. The Orange have run more than 75 plays in each of their first four contests, including three games with 80-plus. The Orange's 334 plays (83.5 avg.) are tied for the sixth-most in the FBS, however, two of the six teams tied or ahead of Syracuse in that department have played an additional game. Syracuse is currently averaging a play every 21.1 seconds of possession time.

Leading the way is quarterback Eric Dungey, who punished Clemson with his arms and his feet last season.

The Orange have also been good on the ground, scoring 12 rushing touchdowns and totaling 1,112 rushing yards (278.0 avg.) in its first four games.

In last season’s victory in the Carrier Dome, the Orange consistently beat Clemson to the edge and also had success running inside. Clemson’s defensive line will be motivated to prove last year was an aberration, but the Tigers’ thin secondary and propensity to give up big plays through the air is a concern.

Yes, this is the debut of Lawrence, but the key might be in Clemson’s running game. The Tigers feature a balanced offensive attack, averaging 230.2 yards per game rushing and 274.5 passing. Sophomore RB Travis Etienne has averaged better than seven yards per carry in his career and is averaging 8.5 yards per rush this season, tops on the team.

Syracuse features the nation’s second-ranked third-down defense over the last two seasons, allowing just 62 conversions in 222 attempts. Clemson’s defense is eighth in that same span. The Orange also have seven interceptions on the season.

Those numbers tell me the key will be gaining enough yards on first and second down to keep Lawrence and offense out of third-and-long. If the Tigers do get into passing situations, however, Lawrence has a plethora of weapons, and the simple truth is that Syracuse has no one that can match up with the likes of Tee Higgins, Amari Rodgers, Justyn Ross, and Hunter Renfrow.

For the record, the Syracuse pass defense is ranked 108th nationally.

The Tigers have been decent on special teams, with Greg Huegel hitting 3-of-5 field goals, Amari Rodgers providing a spark in the punt return game and BT Potter continuing to hit kickoffs into the back of the end zone. Punting is still a concern – the Tigers lack the ability right now to flip the field with a long kick.

I have no doubt that Dungey and the Orange offense have dreams of replicating last year’s feat, and their offensive numbers are good enough to give them confidence. Clemson is a different animal than what they’ve faced so far this season, and rumors out of the Clemson camp suggest the Tiger D is looking for a little revenge after last year’s embarrassment.

The offense under Lawrence will finally get unlocked and the Tigers will have no issues making plays through the air and on the ground. The only suspense late is how much playing time backup quarterback Chase Brice receives.