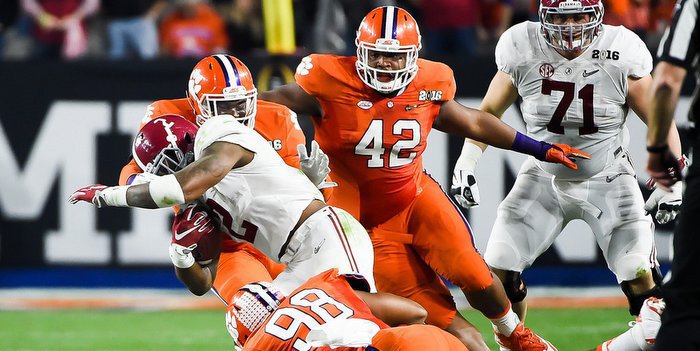 Christian Wilkins will anchor a young Clemson defense in 2016.

The Clemson defense had a second straight strong season in the team’s run to the national championship game, but once again, that unit lost a lot of talent to the NFL. That leads to plenty of new faces in starting spots, and that worked out just fine last year.

The coaching staff is counting on those new faces to step into larger roles and keep the defense rolling this season.

Here’s a look at the post-spring depth chart released by the program this week.

Breakdown: Bryant was a solid backup last year until Shaq Lawson got hurt, and then Bryant really stepped up, playing a terrific game against Oklahoma in the College Football Playoff semifinals. He needs to continue that upward trend as a starter this season.

Breakdown: Watkins has been a reliable player for this program his entire career, but he has two of the best young players in the program behind him. That should lead to plenty of depth and create problems for opposing offensive lines.

Christian Wilkins will anchor a young Clemson defense in 2016. "

Breakdown: Wilkins was a standout as a freshman last year, while Pagano has grown into a really good player. With Robinson stepping into the mix, that makes this group dangerous, and again, a nightmare for opposing offensive lines.

Breakdown: The biggest unknown on the defensive front as Ferrell and Yeargin look to take over and continue the Tigers’ run at defensive end. Their play is going to be key for this unit.

Breakdown: O’Daniel finally gets his chance to be a starter after being a key depth player and a terrific special teams performer. Williams looks to be ready to take the next step, while Wiggins’ return from an injury adds more help and experience.

Breakdown: Another new starter with Joseph leaving the spring with the starting role. He played well when he got his chances last year, while Lamar is a terrific true freshman and will be a key player for this defense.

Breakdown: Boulware becomes the leader of the defense, and he has earned that role with his strong play the past couple of seasons. Davis is a solid player, while Smith is another true freshman who is going to be important for the defense.

Breakdown: Filling the hole left behind by Mackenzie Alexander is going to be tough for anyone. Edmond had a strong spring to take that spot heading into the summer, but watch out for Fields, who has the talent to be a starter.

Breakdown: Jadar Johnson is enjoying stepping into a bigger leadership role entering his senior season. Carter is the ultimate versatile, depth player while Denzel Johnson will get some valuable playing time, as well.

Breakdown: Smith played well when he got time last year, while Muse is another young player to watch. And there is Wiggins, one of the most versatile players on the unit. He will be able to help his younger teammates continue to grow into their roles.

Breakdown: Tankersley was overshadowed by Alexander on the other side last year, but Tankersley has become a big part of this defense and had several huge plays last year. He can become a star this season.