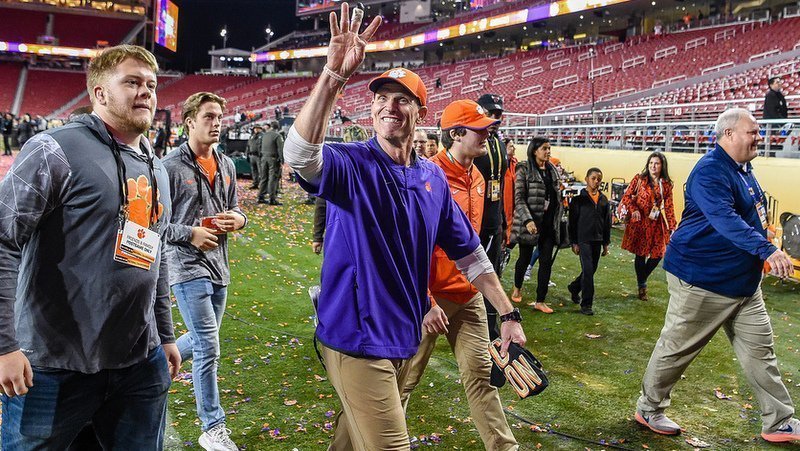 Brent Venables waves after the win over Alabama

Will the last Alabama assistant coach out the door please turn off the lights?

In case you missed it, it’s been a rough few weeks for Alabama head coach Nick Saban and the Crimson Tide. It started with a 44-16 loss to Clemson in the National Championship Game – a game in which Alabama was out-coached and look unprepared – and has continued in the aftermath.

Lupoi is the fifth assistant to leave Tuscaloosa since Alabama's loss to Clemson in the national championship, but the first coach on the defensive side of the ball to move on. Offensive coordinator Mike Locksley is now the head coach at Maryland, co-offensive coordinator Josh Gattis left for Michigan, QB coach Dan Enos is now at Miami and offensive line coach Brent Key left for Georgia Tech.

Alabama replaced six assistant coaches at the end of the 2017 season, meaning there has been a lot of turnover the last two years in Tuscaloosa. That’s nothing new – Clemson has faced four different offensive coordinators in the four games against the Tide the last four seasons – but that’s a lot of staff changes.

Part of the reason is that people want to catch part of the Saban magic, and his assistants have gone on to be successful at other places. It also doesn’t hurt that Alabama wins football games at a historic level, making Saban’s coaches desirable to other programs.

But Saban is also known as a strict taskmaster, and fun really isn’t part of the equation at Alabama. Even when they win, someone seems to be angry about something, whether it’s an Alabama defensive back hurling epithets at Hunter Renfrow after the Sugar Bowl or Saban losing his cool with a sideline reporter.

I’m not around the Alabama program day in and day out, so I can’t tell you how happy everyone is. But I am around the Clemson program day in and day out, and I hear the children laughing as they play on Family Night. Family night is held each Wednesday during the season, and players’ families and coaches’ families are encouraged to attend the last part of practice and a family meal in the football operations center. Head coach Dabo Swinney promotes a family atmosphere, an atmosphere where smiling is encouraged and everyone is reminded to have a little bit of fun along the way.

Clemson assistants have been offered other jobs – even head coaching spots – but unlike at Alabama, they want to stick around.

“The best advice I've ever been given is, don't mess with happy,” Scott said. “Right now, our coaches are happy. Got a great place to work, great place to live. We all have buddies that coach at other places. When you're at a place like Clemson working for a guy like Coach Swinney, you talk to other assistant coaches across the country, you're able to find out we got something special here, it's not like this everywhere.

“I mean, just the way that Coach Swinney leads our program, he allows you to spend time with your family. Unfortunately, because college football is such a big business, there are some places where during the fall, football is what you do, who you are. That's never been the case at Clemson.”

Consider this – Tony Elliott and Scott have held the same jobs since the end of the 2014 season. Robbie Caldwell has been at Clemson since 2011, Danny Pearman has been on staff since December of 2008. Brandon Streeter is the relative newcomer on the offensive side of the ball and he arrived in December of 2014.

That’s a lot of continuity.

“Well, I don't really know or speak of Alabama because I'm not there, but I know that Coach Swinney creates an environment that's very -- it's good in this profession, very family oriented,” Venables said. “It's a very close-knit staff. It's just kind of a philosophy of his in regards to team building, staff building if you will. Just got great cohesion, chemistry, respect, appreciation for one another, appreciation for everyone in that building in the job that they do.

“That all starts, again, with the philosophy of the head coach and what he's trying to build and the people that he surrounds himself with that are centered -- not everybody has to be the same, but people that have the same types of values for their job and off the field personally as well. But it creates a great environment to make a living in a profession that's very demanding. He makes it really enjoyable.”

Venables has spent time at other spots, and he says he’s happy in the knowledge that he has everything he wants at Clemson.

“It's a personal decision for everyone. First of all, you'd better be good enough so you can stay, and you've got to be good at your job to stay. That's what I focus on. And then everything else kind of takes care of itself, and I've always been that way. Just try to be great at what I'm doing right now.”

Swinney says keeping the staff together hasn’t been difficult.

“Well, I mean, it really hasn't been that difficult. I think it's – I mean, it's not something that I really worry about. We just – we have a great environment to live in, a great environment to come and work in. We have great relationships. Our staff is very close,” Swinney said. “We're very – you hear about Clemson family all the time, but it's a very real thing for us, and I think that – I mean, we have guys that have opportunities to leave every year, and we've had change, I mean, since I've been the head coach. I've had different coordinators and different position coaches, but when we've had change, we've been able to make good decisions on who gets the opportunity to come in and be a part of our program.

“But certainly continuity has been a great thing, and I'm thankful for that. Got a bunch of great, committed people and go people, and I always say, I hire good people first, coaches second. And again, we're just fortunate that we're at a place like Clemson where our families enjoy living. We have the opportunity to compete at the highest level, live in an incredible place, recruit at the highest level, and when this is your profession, that's pretty special.”