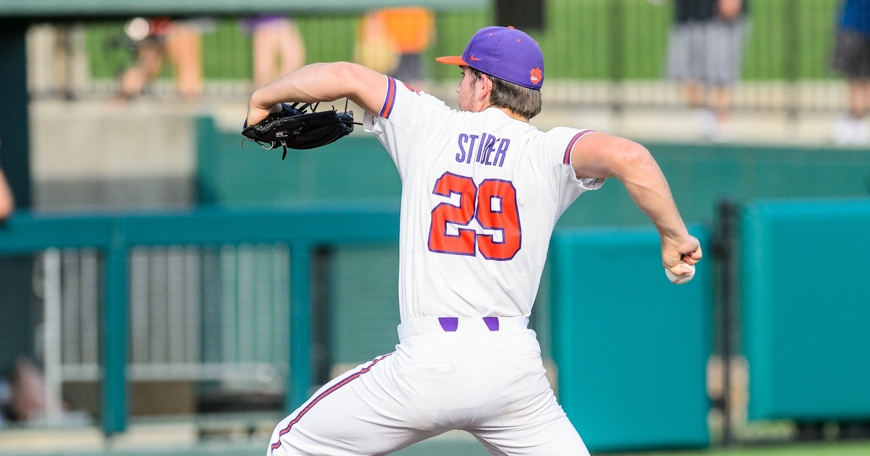 CLEMSON – Another day, another solid pitching effort, and a three-game sweep to start the season.

Five Clemson pitchers combined to limit Liberty to just five hits and Adam Hackenberg had three hits and drove in three runs as the Tigers swept the Flames with a 6-2 victory at chilly Doug Kingsmore Stadium Sunday afternoon.

Clemson improves to 3-0 while Liberty falls to 0-3.

The Tigers broke the scoreless tie in the bottom of the third. Elijah Henderson laced a one-out double down the left-field line and Kier Meredith’s infield single moved him to third. James Parker walked to load the bases, and Adam Hackenberg smoked a 2-0 pitch into right-center for a two-run single. Clemson led 2-0 after three innings.

Starter Spencer Strider’s day was done after three innings. Head coach Monte Lee said he will be careful with Strider early in the season, and Strider threw 45 pitches, 30 for strikes, while giving up no hits, walking one and striking out four in a dominant outing.

Strider was replaced by Mat Clark to start the fourth, and Clark pitched a scoreless inning in the fourth but ran into trouble in the fifth. Brady Gulakowski singled with one out – the Flames’ first hit of the game - and Ben Highfill launched a two-run homer over the wall in center to tie the score.

The Tigers took the lead back in the bottom of the inning. Parker lined a 1-2 pitch into left for a two-out single and promptly stole second. That brought up Hackenberg, who singled through the left side, scoring Parker easily for a 3-2 lead after five.

Clemson added another two-out run in the sixth. Mac Starbuck smoked a hustle double down the left-field line and Elijah Henderson lined a run-scoring single to center that made it 4-2 through six. Clark’s day was done after the sixth – he pitched three innings, gave up two runs (both earned), walked one and struck out four in picking up the win.

Parker led off the bottom of the seventh with a solo homer into the Chapman Grandstand in left to make it 5-2. The homer was his first of the season and just the second for the Tigers in the first three games. The Tigers continued the one run per inning stretch in the eighth, adding a little insurance. Bryce Teodosio doubled to lead off the inning and moved to third on Starbuck’s sacrifice. Henderson then lofted a fly ball into medium center and Teodosio beat the throw to the plate for a 6-2 lead.

Clemson’s early-season homestand continues with games Tuesday and Wednesday. The Tigers host The Citadel Tuesday at 4 pm and Furman Wednesday at 4 pm. Stony Brook comes to Clemson for a three-game series next weekend.