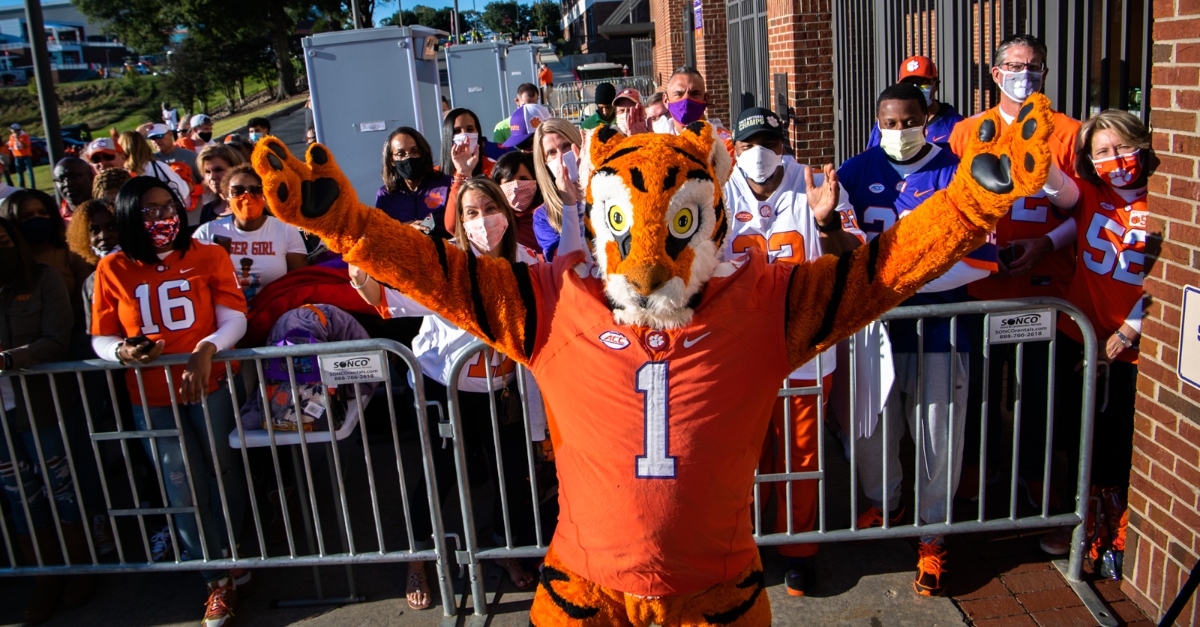 The Tiger poses before the game against Virginia (ACC pic).

Clemson took the lead with 13:24 remaining in the first quarter and never surrendered it. They outscored Virginia in each quarter. The game was never in doubt, yet it felt as though the Tigers played below their standard. Such is life as the No. 1 ranked team with “best” as the standard. So what did we learn? Below I delve into some key stats and discuss what we found out this week in college football.

If it felt like Clemson’s defense couldn’t get off the field and didn’t look as dominant as usual, you weren’t imagining things. Virginia did an excellent job controlling the clock and keeping drives alive.

QB Brennan Armstrong was a big reason why as he often kept the chains moving with his legs, racking up 89 rushing yards. Head Coach Bronco Mendenhall also deserves credit for going for it on fourth down five times. They converted four of those attempts.

Clemson helped keep Virginia’s offense on the field with penalties too. In total, they committed eight (versus five in each of their prior games). Dabo cited penalties as something he was disappointed in and noted that there is “no excuse for the penalties we had.” The Tigers still won comfortably, which is a testament to the program Coach Swinney has built, but they’ll need to be sharper next week against a Miami team that presents more overall talent and a bigger running threat at QB.

This off-season, we tried to predict who would fill the rather large void left by Tee Higgins and Justyn Ross at wide receiver. Veteran Amari Rodgers has been a big part of the answer. With 12 catches for 206 yards through three games, he is on a 12-game pace for 48 catches for 824 yards and 12 TDs. His career high in yardage is 575 (2018) and TDs is four (2018, 2019). He should shatter those marks this season.

Beyond Rodgers, there was plenty of speculation as to who would step up on the outside. There was a lot of discussion about Cornell Powell and Joseph Ngata, but Powell has been limited to 45 yards thus far while Ngata has been slowed by injury. Frank Ladson is becoming the Tigers biggest outside threat. After a strong game against Virginia, he is up to 9 receptions for 179 yards. That’s 19.9 yards per catch. His speed/size combo is really intriguing moving forward.

With the first relatively competitive game of the season, and with several players getting healthy, we got a real look at the running back depth chart this week. Travis Etienne of course is the starter and star player. He broke countless tackles on his 14 carries, but was even more dangerous through the air. After catching five passes for 114 yards against Virginia, he now has nine catches for 172 yards on the season. Along with improved tight end play, Etienne helped the passing game attack the middle of the field.

Lyn-J Dixon was the second running back to see action with the offense. His highlight came on special teams though as he returned the opening kickoff for 52 yards setting up Clemson for a field goal on the first drive. An unnecessary roughness penalty and a dropped pass were the lowlights. The only other running back to get a carry was Chez Mellusi who cashed in with a TD on three carries for 10 yards.

After those three, Darien Rencher, Mikey Dukes, and Kobe Pace (Rencher played but didn't see a carry) – provide great depth to the running back room even after losing freshman Demarkcus Bowman to transfer last week.

Trevor Lawrence was superb yet again on Saturday. While the team may have looked sluggish at times, Lawrence was on point and urging the offense to find a quicker tempo. Playing nearly the entire game allowed him to rack up a gaudy 329-yard stat line. He now has 848 passing yards and seven passing TDs. No other FBS QB in the country has seven passing TDs without a single interception.

While a Clemson Tiger winning the Heisman isn’t a team goal or key to the season being a success, it would be nice to see a deserving Tiger get his due. With Spencer Rattler seemingly bowing out after throwing an interception on what could have been the game-tying drive for the second straight week, Lawrence’s biggest competition may be Miami’s D’Eriq King. King has 736 passing yards and a 6-0 TD to INT ratio. While Lawrence holds the edge in those passing statistics, King has 157 rushing yards compared to Lawrence’s 14 (note: sacks count against QB rushing). The QB battle will be an interesting sub-plot to this week’s game reminiscent of the 2016 Louisville vs. Clemson game when Deshaun Watson and Lamar Jackson squared off.

Things just keep getting worse for the Big 12. Last week I posited that a potential one-loss SEC/ACC runner-up or undefeated AAC team would be a better playoff pick than the Big 12 champion. Then both Oklahoma and Texas lost this week and cemented it. Iowa State did the honors to the Sooners, scoring 37 and intercepting QB Spencer Rattler to end the game (and his Heisman hopes). It was TCU who beat the Longhorns in Austin. It was their sixth win over Texas in their past seven matchups. From 1968 to 1991, the Longhorns went 24-0 against TCU. How things have changed!

In the SEC, Alabama looked as good as usual, blowing the doors off Jimbo Fisher’s Texas A&M squad, 52-24. Frankly, it could have been worse if not for a fortunate turnover. Alabama QB Mac Jones was excellent, throwing for 435 yards and 4 TDs along with one INT. He leads all FBS QBs in yards per pass attempt at 13.4.

Miami enjoyed an open date to prep for their trip to Clemson – a game that will get a visit from ESPN’s College GameDay and is sure to be the game of the weekend, even with Texas vs. Oklahoma and Georgia vs. Tennessee on the same day.