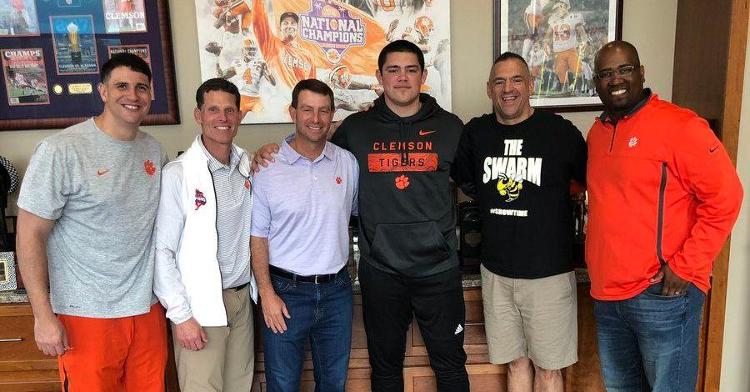 Bryan Bresee will be a team leader early on.

There is a lot going on in Clemson this week. A lot.

Clemson plays the first home softball game in program history Wednesday and baseball gets underway this weekend with a three-game series. Softball plays four games in three days over the weekend while Clemson basketball plays at Pitt Wednesday and hosts Louisville Saturday. Add in the other sports and it’s going to be a busy week.

Before we start on our previews of football’s spring practice, I wanted to put the wraps on the Tigers’ 2020 recruiting class with a few notes and some odds and ends.

I had a friend send me a text last week who said he was bothered that Georgia edged out Clemson for the top spot in the class, and while I didn’t want to actually laugh out loud at the statement, I did send him the ubiquitous LOL back and told him that Dabo Swinney thinks this might be his best class and, not that it matters, I agree.

Working for TigerNet as the Senior Writer AND doing the majority of the recruiting work (the only person in Clemson that does both) allows me to get a first-hand look at most of these prospects long before they arrive on campus. I make my way to the Nike regionals around the area, see them in Swinney’s high school camp in June, see them play their games in the fall and see the top prospects at The Opening in July.

I have told anyone that will listen that, to me, this is the best recruiting class I’ve ever seen. Yes, they are all good players (some will be great), but this class brings more to the table than just their athletic ability. This class filled needs and, as Swinney has said, they all seem to be a great fit for the Clemson culture. There are the natural leaders like Bryan Bresee and guys that will be quiet leaders like Sergio Allen (fans are gonna love his interviews). There are comics (Tre Williams) and guys who like to talk (Kevin Swint) and guys like Walker Parks, who brings an intensity to practice and games that every program needs.

The defensive line is of particular interest to me because they all could play this year. Bresee and Myles Murphy are the real deal, Tre Williams is going to be a star, and Demonte Capehart (who told everyone at the recruiting wrap earlier this week that there was no way he was going to South Carolina) will soon be a fan favorite. Add in the offensive line recruits (all good dudes, all good players) and the needs filled at the skill positions and linebacker and in the secondary and this class is the best I’ve seen.

Speaking of the recruiting wrap – you really should go next year if you haven’t had a chance to attend – there were a few stories that came out of it that are worth sharing. The first involves Brent Venables and Mickey Conn, who were in Philadelphia recently on a recruiting trip with Swinney. Venables is never going to miss his morning run, and he told Swinney and Conn that even though it was 12 degrees outside he would be out for the run early the next morning because he wanted to run the famous Rocky steps (from the Rocky movie).

Swinney said Venables came downstairs dressed like a serious runner – the right shoes, the right clothes, the right gloves, and hat – looking like someone who knew what he was doing. There was no way Conn was going to miss the run and he came downstairs in a light jacket, casual shoes and…….jeans. Despite the lack of proper clothing, Conn made the run. Offensive line coach Robbie Caldwell piped up and said no one asked him to run, drawing laughs from the crowd.

University President James Clements then told a story about a mother who brought her daughter to move in last August. They were from Connecticut and the mother worried about leaving her daughter so far from home. When she went to Wal-Mart to pick up a few things, another woman noticed her distressed and talked to her. The other woman eventually gave the woman her private cell number and said to call her if they needed anything, writing both her number and name on a slip of paper.

The woman ran into Clements later in the year and said there were a lot of good people in Clemson and told him the story. When Clements asked to see the paper, the woman pulled it out and the name on there was Kathleen Swinney.

And people wonder why the Clemson brand resonates across the country.