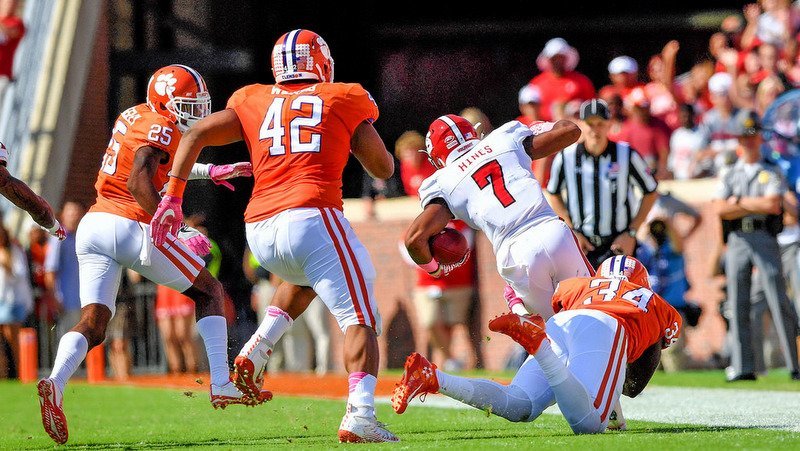 The Tigers chase down a Pack ball carrier two years ago

A blowout or another nail-biter?

Predictions for Saturday’s matchup between North Carolina St. and Clemson run the gamut, with some calling for a big spread in points and others calling for another one-score game. The honest truth is that none of us know how the game will play out – it really comes down to execution, special teams, and turnovers. The team that owns those facets of the game will likely win.

I can tell you that from all of our reports, the team had great practices this week, the kind of practices they had before the 63-3 victory at Wake Forest. After that game, a smiling Brent Venables told us he knew the Tigers would play well - the body language getting off the bus told him so. We’ve heard that same body language has been present this week.

One person told me that while the team doesn’t pay a lot of attention the outside noise, there hasn’t been any hiding the displeasure with some of the talk coming out of the NC State camp. Quarterback Ryan Finley has said if the Wolfpack execute it’s a win, and coach Dave Doeren has shouted far and wide that the Pack should have beaten the Tigers each of the last two seasons.

That hasn’t set well in the locker room, and while some might think that means the crowd will see a bunch of fire-breathers take the field Saturday, the reality is that when this team has been challenged in recent seasons they’ve come out not with fire and heat but with a cold, focused precision. There will be times when this group gets emotional and gets the crowd in the game, but expect to see this team with more of a businesslike approach.

After a win at Florida St. a few years ago, I asked a player about the lack of fire from the team (in a win) and he smiled and said, “Emotion is great until someone hits you in the mouth, then it’s all business. We made this a business trip.”

As for last season’s matchup in Raleigh, it’s easy to forget that it was a wounded bunch of Tigers that took the field in that game. Dexter Lawrence wasn’t 100 percent and Mark Fields and Marcus Edmond each missed the game due to injury. In fact, Amir Trapp was picked on early by Finley and it led to a touchdown and the Tigers actually brought wide receiver Ray-Ray McCloud in to play defensive back.

That’s getting way down on the depth chart, and the Tigers are far healthier this time around.

As one person told me earlier this week, “Everybody wants to play in this one.”

We’ve also heard that Diondre Overton has had a great week of practice – he didn’t play a few weeks ago against Syracuse but caught a touchdown against Wake Forest, and the word is that he’s had a great few weeks. If the Pack try to take away the Clemson run game, there will be 1-on-1 matchups on the outside, and you can expect Tee Higgins, Overton, and Justyn Ross to play a big role.

However – we’ve also heard that the coaches feel like they might be able to exploit some weaknesses in the State linebacking group, and if that’s the case then guys like Amari Rodgers and Hunter Renfrow will have big games.

But, to be honest, I am just not sure they can play the Tigers man-up and stop the running game with Travis Etienne. If they have to bring seven or eight in the box, Trevor Lawrence and the receivers will have a big day.

Finally – this should be fun. Big-time recruits on hand, a sun-splashed and cool afternoon in the Valley and plenty of great football.